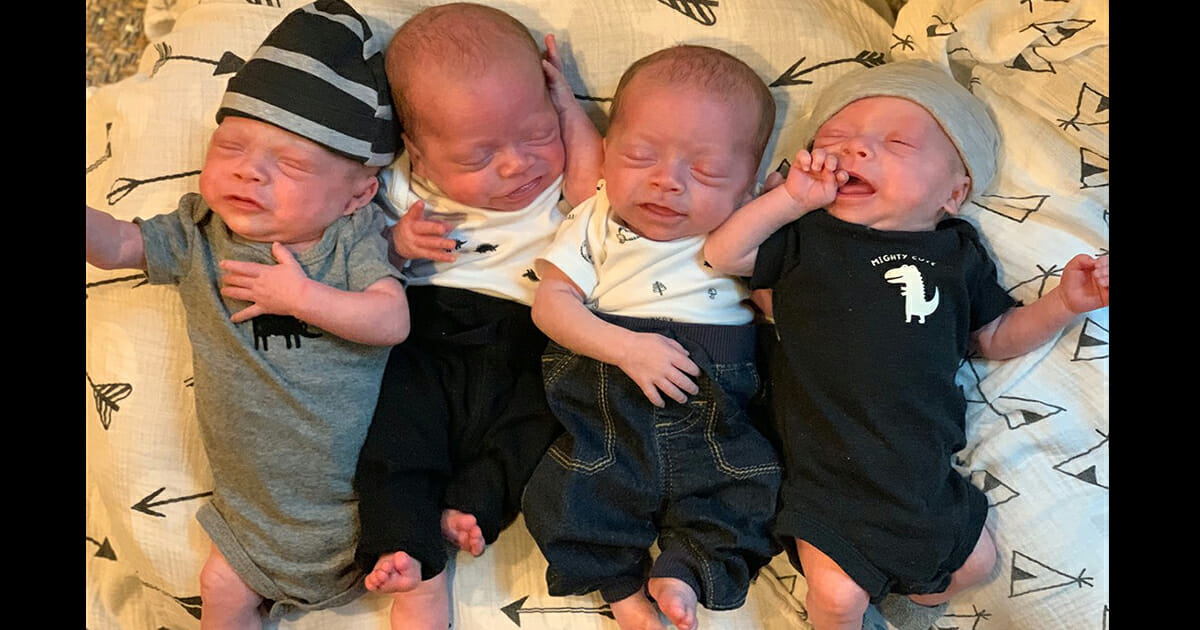 Jenny Marr would have been forgiven for thinking there was something wrong with her unborn baby when her doctor had a peculiar look on her face during the first ultrasound.

Little did she know Dr. Lauren Murray was about to change her and her partner’s life forever.

Jenny explained to TODAY: “I was like, ‘Oh no, there’s no heartbeat.’ And, she’s like, ‘No, there is a heartbeat.’ She goes, ‘Y’all, there’s three babies in there.’ And we were just absolutely floored.”

Jenny and partner Chris were naturally shocked, but the surprises didn’t end here. Just a week later, on November 19, 2019, they visited a maternal-fetal medicine specialist for a follow-up appointment and got the same odd glance from the technician performing the ultrasound.

“The tech — who was doing the initial (scan) — she gave me a funny look. We were like, ‘Oh what’s going on now?’ We got worried again,’” Chris told TODAY.

“She was really cute. She said, ‘I’m not supposed to say this, but y’all got four babies.’”

In just seven days they’d gone from expecting one baby to being told they were having FOUR.

Chris said: “I made the joke that I am not coming back because there are going to be five babies next time. We were just shocked. Jumping from three to four was easier to swallow. Just after that we heard they were healthy.”

Dr. Lauren Murray and her colleagues estimated that identical, spontaneous quadruplet births occur in 1 in 11 million or 1 in 15 million births … extremely rare to put it mildly.

“It’s unbelievable. It’ll never happen again in my career. I said, ‘Girl, go buy a few lottery tickets because those are the kind of odds we’re dealing with,’” Murray said. “What a miracle it was.”

Despite risks that one of the babies could pull nutrients away from the others, thus requiring surgery and causing problems, it turned out that this quartet were perfectly ready to share.

“The babies shared incredibly well. There were no incidents on the sonogram even leading up to that where we were worried that one of them, or two or three of them, would be significantly smaller,” Murray said.

So it was that at 28.5 weeks, on March 15, Jenny went into labor. She delivered early, and during the beginning of the coronavirus chaos, but her C-section went well.

“They were all born in three minutes. It’s incredible,” Jenny said. “We called them our baby birds because they really looked like baby birds.”

Three of the four stayed in the neonatal intensive care unit for 10 weeks to receive oxygen, amongst other things. In early May, though, they came home … and Jenny and Chris couldn’t be happier.

“We just hope that this little story and our boys bring as much joy to everybody as they bring to us,” Jenny explained.

Four precious little babies come into the world … what a truly blessed day March 15 was.

Jenny and Chris, I’m delighted for you both. I can’t imagine the memories you’ll create as a family and the love that will be present in your household.

Did this story put a smile on your face? Share the article on Facebook if it did!