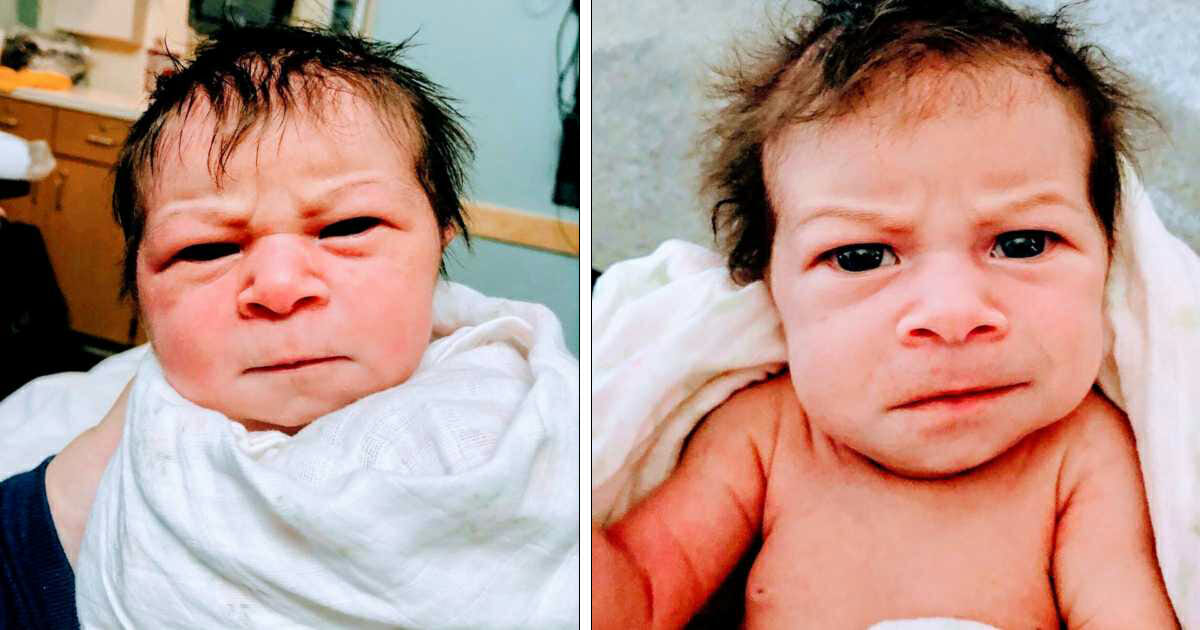 For some of us, falling pregnant can take years of planning and trying. For others, it can happen unexpectedly in the blink of an eye.

One of the wonders of life is that it’s so unpredictable; we just never know when one of our family members or friends will become pregnant.

Hollie Walls wasn’t expecting to have a baby. Given that doctors had told her she would need fertility medication, she was shocked to learn that she was pregnant. Hollie had undergone two surgeries the previous year to remove a large mass from her uterus, leaving her skeptical about her chances of conceiving.

Hollie already had two sons from a previous marriage, but her and her current husband wanted to add to their family.

As she explained to Love What Matters: “I got pregnant almost immediately and even though I am very well aware we were participating in acts that could lead to a child, I was still incredibly shocked to find out I was actually pregnant. I remember seeing two lines on the pregnancy test and thinking, ‘It must be a faulty test, there’s no way I could naturally fall pregnant.’

“I didn’t even want to tell my husband at first because I was sure it would just be another disappointment and we had been through too many of those.”

Hollie’s pregnancy was uneventful up until 39 weeks. Every ultrasound and doctor visit had been perfect, she was measuring on time and her blood pressure was great.

Her due date came and went, but she wasn’t anxious as both of her previous children had been born late.

“When I was 41 weeks pregnant, I went to my final OB visit to schedule my induction as it appeared this baby wasn’t going to come on her own,” Hollie explained, as per Love What Matters. “The OB took my blood pressure, checked my urine and gave me a quick ultrasound at the clinic to make sure everything still looked fine.

“When it came time to do the ultrasound, I could tell by the look on his face that it wasn’t good news. ‘I can’t find any amniotic fluid,’ he said. My heart sunk. I didn’t have any signs that something was wrong so I was completely shocked.”

Hollie was soon diagnosed with Oligohydramnios, a condition she had never heard of before then.

She said: “I left the OB’s office and went immediately to the hospital (it was a Friday) and they ran a bunch of tests and I had another ultrasound. The second ultrasound showed that I did have very low amniotic fluid but they were able to locate some fluid pockets which was such a relief.

“The baby was really healthy on the monitor and had a great heartbeat and I was experiencing lots of movement, so I was booked in for an induction for the following Monday.

“I woke up Sunday morning and something just didn’t feel right. The baby was moving but the movements felt different, like they were slower. To this day I can’t explain it. I put it down to mother’s intuition. I just knew I had to go to the hospital urgently. I called my doula and she said she would meet me there within the hour. I wanted to be excited about meeting my baby but I was so worried.”

When Hollie got to the hospital, she went straight through to triage. She lay on a bed as a nurse offered small talk, but even so she could sense the worry in the room.

“People came in and out of the room and asked me questions about the pregnancy, the movements I was feeling, etc. The next thing I saw, a nurse hit the emergency button and an alarm started going off and before I could even grasp what was happening, close to 10 people were in the room with me.

“The baby’s heart rate was dropping and then accelerating, and it was decided that a c-section was the only safe way to get her out and it had to be done NOW. I had people working frantically to try and get an IV line in me, I had other people trying to get me in to a position to get her heart rate to stabilize, I had someone else bringing me paperwork to sign.

“Finally, an OB came in to talk to me about the possibility of my baby being brain dead due to her heart rate and what to expect from my c-section. They got the baby’s heart rate back into the normal range and immediately wheeled me off to the OR. I didn’t have time to talk to my husband – I was so scared.“

Once Hollie’s baby was delivered via C-section, she heard her cry. “All I could think was, ‘She is so tiny.’ I remember looking at her thinking I had never seen a baby so small, but thankfully she was healthy!“

Hollie was able to give her skin to skin almost immediately. She named her Winter Josephine.

“Once we got out of recovery and back to our hospital room, I just held Winter in front of me and stared at her. As perfect as she was, I couldn’t help but laugh because she looked so angry.

“If I had to guess what she was thinking at that very point in time, it would have been, ‘I was comfortable in there. Put me back!’ Everyone that saw her said the exact same thing. ‘She looks so mad!’ When my husband and sons came in to meet her, she just stared at them with tensed eyebrows that showed she was incredibly inconvenienced by us.”

It wasn’t until two weeks after Winter was born that Hollie realized just how dangerous Oligohydramnios can be. While looking for a newborn photographer she spoke with a volunteer who also went to hospitals to take photos of angel babies for grieving families.

Hollie told her about Winter being born with no amniotic fluid and the photographer replied that a lot of the angel babies she encountered came as a result of that same issue.

Winter may look like she’s always got a grump on, but there’s no doubting she’s one special baby.

We’re glad mother and baby are healthy and happy after what must have been a trying ordeal.

Share this article to celebrate another beautiful baby being given unto the world.