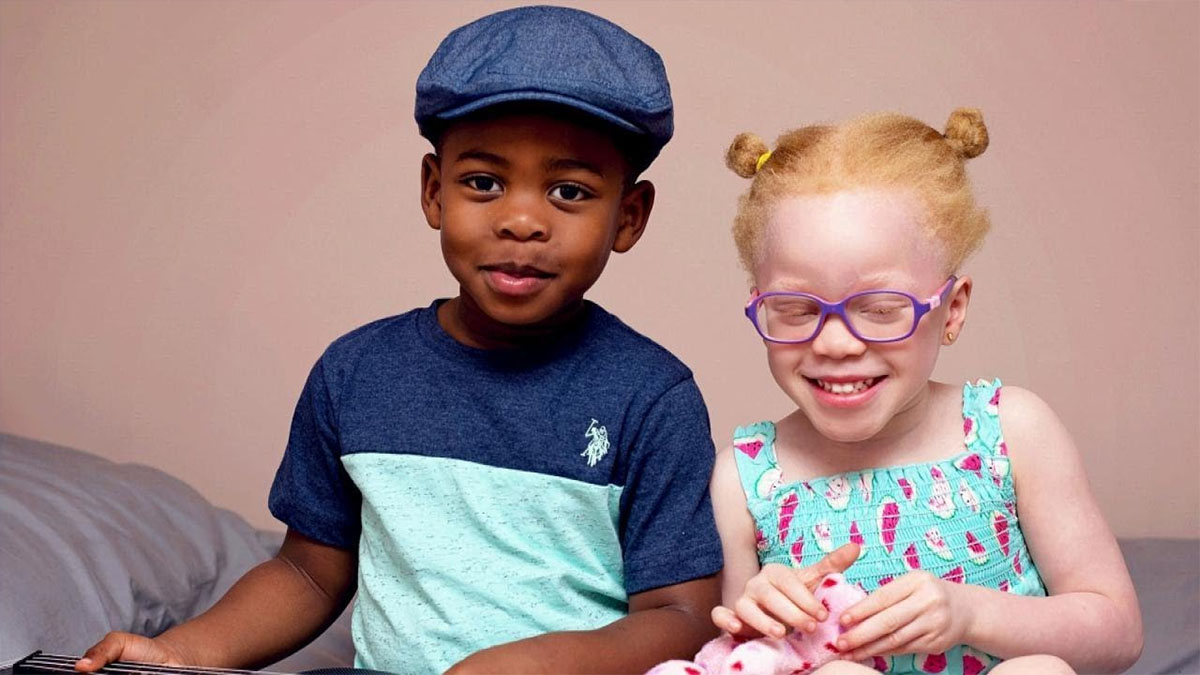 After an 8-year struggle Judith Nwokocha was thrilled to discover that she was pregnant.

The 38-year-old Nigerian-born photographer from Calgary fell pregnant with her husband, who is also black, through IVF and later discovered that she was actually pregnant with twins.

As her pregnancy progressed one of her babies fell behind in the growth rate and she was warned her baby may have Down syndrome.

At 37 weeks Judith was induced and her twins were delivered via caesarean section.

She delivered her baby boy, Kamsi, weighing 6.1 lbs., but was understandably concerned when her daughter Kachi arrived weighing just 3½ lbs.

But this wasn’t her only concern as her baby daughter was diagnosed with albinism which affects the production of melanin, the pigment that colors skin, hair, and eyes.

When she was handed her beautiful babies Judith revealed her shock at seeing them and initially believed she had been given the wrong baby.

“The first time I saw her, I wondered if the nurse was handing me my baby, or someone else’s. I waited a few seconds for someone to tell me there was a mix up, but all I heard from the nurse was how beautiful she was.”

Judith was concerned about the growth rate of her daughter while she was carrying her but she never believed she would give birth to a white baby.

Judith wrote, “I was quite surprised by how white she was.” A few days after the twins were born, doctors told Judith that Kachi had albinism.

The mom of two was initially concerned for Kachi and how people would react to her as well as being concerned about her health after being told that Kachi would be visually impaired for the rest of her life.

“I loved my princess like every mother would love her baby, but worried about her condition,” she wrote in a Love What Matters essay.

“Gradually, worry turned to sadness and I started questioning God, wondering why he would put me in such a situation. I worried about her future, how society would treat her, how she’ll be accepted…

“I envied other black babies and thought, ‘Why me? Why was I the one to have an albino baby? How did I get black and white twins?”‘

She even said that she and her husband had to go to counselling to help learn to cope with Kachi’s condition and by the time the twins were 1 Judith said she had learned to see past the negativity.

“I began to see the beauty in her condition. I began to admire her gold hair, her brown eyes, her pink lips and everything about her.

“I noticed how attractive she was to people whenever I took them out. People admired her a lot and she is usually the one who gets all the attention.”

Like all twins the brother and sister share a special bond and don’t notice that anything is different.

Judith says she is now working on always reminding her daughter just how special she is.

“I always tell her how beautiful she is, because she really is. I wouldn’t trade her condition for a million dollars because she’s perfect to me in every way,” she said.

“Albinism may have its challenges but I’m teaching her to be strong and conquer whatever may come her way. I’m showcasing the beauty in albinism by constantly taking pictures of her and twin brother.

“I’m not sure she’s aware of her uniqueness at the moment, but eventually she’ll know, and it’s my responsibility to educate her and teach her to love herself no matter what.”

Such beautiful babies that should be celebrated for their differences, they are so special.