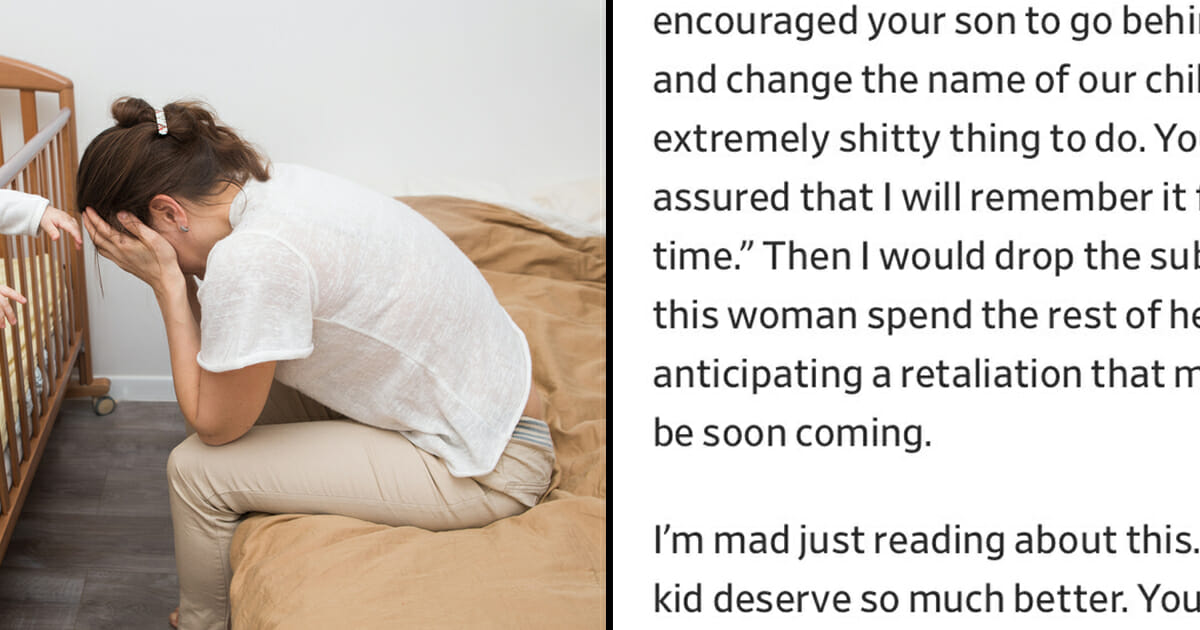 Thanks in no small part to Hollywood – with a little bit of sprinkling from real life anecdotes – infuriating in-laws are something many of us have come to expect.

Of course, in reality most mother-in-laws and father-in-laws are accepting and kind. I say most because there do exist those who are slightly less accommodating.

If you’ve experienced what I’m referencing then I feel bad for you, although the chances are your frustrations are nothing compared to one mom whose mother-in-law (MIL) convinced her husband to change her baby’s name while she was in recovery from a C-section birth. No, seriously …

The mom in question vented her feelings in an online advice column, revealing how she’d been lied to by both her MIL and her husband. The backlash was rightfully fierce, with the columnist even urging the mom to consider it a “fireable offense” on her husband’s part.

My son is 2 months old, and I just discovered our husband spelled our son’s middle name as “Finlay” instead of “Finley” on all of his legal documentation. I, of course, am furious, because I told him I was fine with the middle name but it had to be spelled Finley–and he agreed before our son was even born.

His mother even sent a Christmas gift to middle name “Finlay”, and when I made a comment to my husband he didn’t even have the decency to tell me! He just let me keep believing for two months that our son’s middle name was spelled Finely when it legally isn’t!

I discovered all this when I went looking for his Social Security card and birth certificate to file them away properly. He says he regretted it as soon as the card came and has been afraid to tell me.”

The woman went on to detail her husband’s defense, which was poor to say the least …

“Now here’s where it gets tricky,” she writes. “Apparently his mother guilt-tripped him into doing this while I was asleep after my emergency C-section. Keep in mind she lives a few states away, so this was all over the phone. She tried to convince him to give our son a first name that I very much hated, saying that I would “get mad, but get over it.”

My husband thought changing his first name was too much but apparently gave in to spelling his middle name the way his mom wanted. She thinks that “Finlay” is more masculine than “Finley.”

His mother has always been a manipulator and I have always known she doesn’t like me. But she blatantly disrespected me and the name my husband and I had chosen for our son. I really think she put his whole name in his Christmas gift as a jab at me, knowing I would see it.

She manipulated my husband into thinking it was all right to lie to me about something as serious as the spelling of our son’s name.”

To wrap up her point, the mom confirmed she and her husband were working through things, but that she would be changing his name in the near future.

I have no desire to have any sort of relationship with her moving forward, so I am not worried about playing nice.

I will be legally changing my son’s name to the correct spelling.

The post has caused no end of backlash online, as well as a heated debate between those who are convinced the mom should react angrily, and those suggesting she may be overreacting.

Of all the responses, however, it was perhaps the advice columnist, Carvell Wallace, himself who reacted with the most venom.

If I were in your situation, I would not approach the offending in-law about this issue because I’d be afraid an actual fistfight would break out. We’d really have to talk about renaming these hands. That’s how mad I would be.

Secondly, what in the entire fuck is up with your husband? He’s got to decide if you are his co-parent or if his mother is. And until he makes that decision, he can’t be trusted. Period.

Purposefully changing the name of your child on a birth certificate behind your back is pretty close to a fireable offense if you ask me. I mean real close. I don’t take divorce lightly, and I’m recommending it on the strength of this one event alone, but a thing like this gets up to a good 65 percent on the Potential Divorce-O-Meter, and if I were you I would need some time to get over this. He owes you a significant and full-throated apology, and if he doesn’t see why then it’s hard for me to imagine that you are in a relationship with a trustworthy partner.”

What do you think? Does this wife need to have ‘the talk’ with her husband? Is she overreacting slightly?