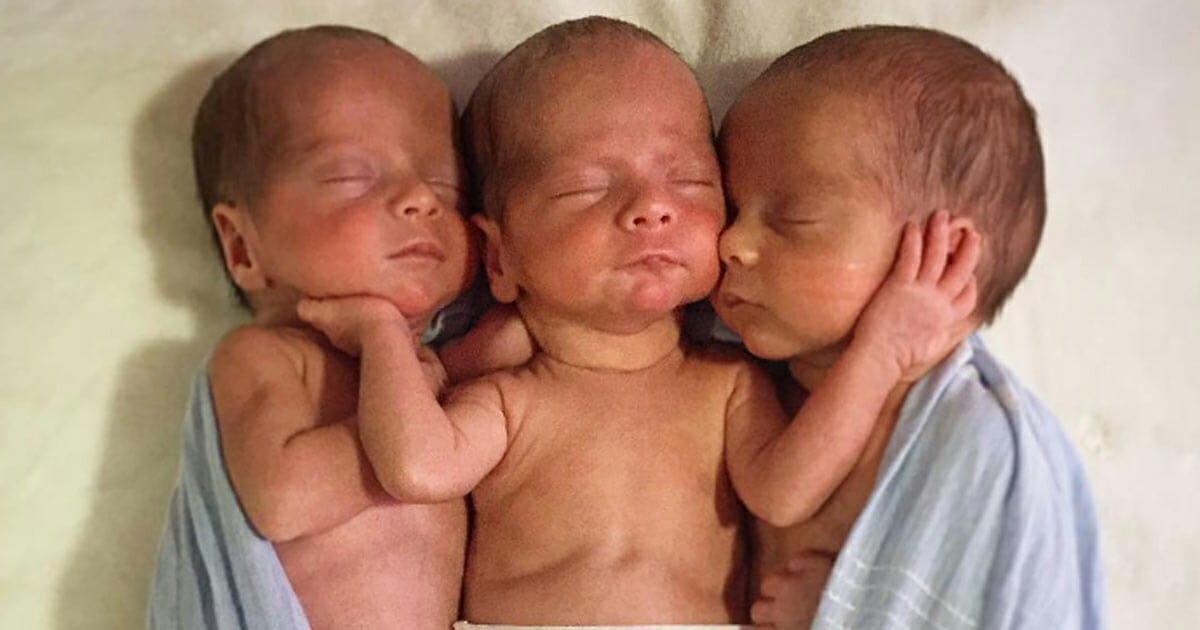 Becki-Jo Allen and her young daughter Indiana lived a safe, quiet and comfortable life in England.

One day, however, Becki-Jo began to feel nauseous and suspected she might have fallen pregnant again.

It turned out she was indeed expecting … expecting triplets! When the time came to deliver them, however, a surprise even bigger than that announcement was to come. What happened was so rare that the chances of it occurring stand as high as 200 million to 1.

Becki-Jo and her daughter Indiana live just outside the city of Liverpool, England. Their life was a calm one, until one day Becki-Jo began to suspect something was happening inside her body. It started when she began to suffer from nausea.

Becki-Jo told the Liverpool Echo: “I had been being very sick and had a really bad headache so I booked an early scan and that was when I found out I was expecting triplets. It was the biggest shock of my life!

“We haven’t got any triplets in the family so it came completely out of the blue.”

The mom was understandably shocked, but delighted with the news. Indiana was to be the big sister to three! Becki-Jo received plenty of support from loved ones and went about trying to mentally prepare herself for the task of bringing three children into the world.

In week 31 of her pregnancy, however, Becki-Jo was rushed to hospital with complications. There, she delivered her triplets via Caesarean section. Due to the premature nature of their births, they were extremely small.

The smallest of them, Rocco, weighed just 3,3lbs. His brothers were only slightly heavier.

As a result of their size, all three had to spend six weeks in intensive care.

Pregnancies involving triplets are fraught with risk, and it’s rare that all three foetuses survive.

Week one of nursery for my boys , they have started to settle in nicely. However they have all got bad chest infections and they've only been there a week ?? I forgot how vulnerable premature babies are. So now I've got 3 poorly babies , just hope they don't get any worse ? #miraclebaby #triplets #newborn #babies #prematurebaby #preemie #trio #identical #mamasboys #babysquad

However, Becki-Jo’s three turned out to be fighters. They all recovered, steadily gained weight and became stronger with each passing day.

Then, after almost one and a half months in hospital, the boys were able to go home.

Newborn triplets ? these days were quite scary . Having 3 newborns all at once was the biggest challenge I thought I could ever imagine. The boys never stayed in my room so I was always anxious putting them down for the night , plus with them being premature it was a tiny bit more scary, but these little @snuzamonitors were a god send ??. I could actually rest when they were in bed , they would ring if they couldn’t detect a movement and they make a clicking noise every time it detected a movement. These were one of the best buys I’ve ever had. The main reason I got them because the first night at home From being discharged from @liverpoolwomens roman decided to stop breathing and ended up rushed into @alderhey where they kept him until he was better . That’s when I decided to get portable ones , that they could wear everywhere I went with them ! #pieceofmind #triplets #babybestbuy #tripletsofinstagram #babies #newborn #nopriceonlife #identical #identicaltriplets #multiples #twinsandmultiples #tamba #3 #justbaby #babyarea #baby

Now, Becki-Jo herself was convinced her boys weren’t identical, even though she had trouble telling them apart.

But as they grew people continued to struggle to know which one was which. Strangers would stop Becki-Jo in the street just to ask!

So the mom decided to investigate the matter further, contacting a lab that helped to perform DNA tests on the three brothers.

The results proved that the brothers were genetically identical. The chances of that happening can be as high as a mind-blowing one in 200 million.

Reportedly, the odds of triplets being born have increased with the introduction of test tubes and hormone stimulation. Even so, to be genetically identical is still extremely unusual.

“We don’t get anywhere fast because people are always stopping us when we’re out and asking if they are identical.

“I was always convinced they weren’t, because that’s what I had been told during my pregnancy.”

WORLD MENTAL HEALTH DAY ! today they are wearing yellow in school to support @youngmindsuk , because believe it or not kids can also have mental health issues too ⭐️ jumpers from @georgeatasda @georgeprteam #helloyellow #worldsmentalhealthday #youngminds #triplets

As one might expect, the family go through a lot of resources. Becki-Jo herself says the washing machine is running almost 24 hours a day.

Understandably, this adorable family gets plenty of attention when they are out and about town.

Share this article with your friends if you agree the three boys are cute!