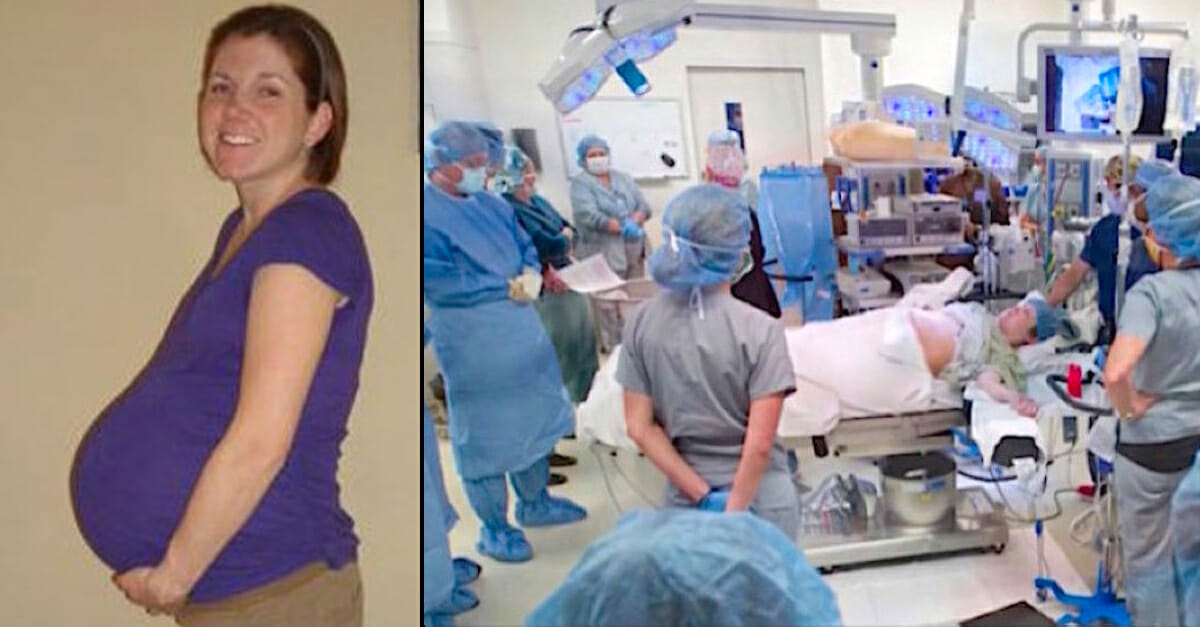 Lauren Perkins has always dreamed of becoming a mom. After spending a difficult year trying and failing to fall pregnant, the idea of fertility treatment didn’t seem so scary anymore.

She and her husband, David, decided to take a vacation to Nicaragua to consider their next step.

The couple, along with some friends, did exactly that. Whilst there, Lauren talked openly about their struggles to conceive. One of their friends, a priest, replied calmly:

“Someone up there has big plans for you. I don’t know what, but it will be big.”

After the Nicaragua trip, Lauren returned home to Texas. She didn’t think much about what the priest had said during the vacation.

On the contrary, her and David had decided on one thing: They wanted to try out artificial insemination; the simplest method of assisted fertilisation.

Lauren was convinced that it wouldn’t work; that she was destined to be barren… but it did! Lauren finally fell pregnant.

In the first routine check, Lauren was told by nurses that her hcg levels were very high.

That meant there was a strong possibility there was more than one child growing inside of her. Lauren and her husband were delighted at the idea they might have twins, or even triplets! They had struggled for so long to have a child that the idea of having more than one was too good to be true.

Then the ultrasound came. A staggered doctor studied the screen for a few seconds and delivered the shocking news…

The doctor quietly told her: “I count five in there.”

Lauren thought this was impossible.

The doctor turned back to the screen and then continued: “Wait a minute! I just found a sixth baby.”

The confused couple stared at the screen in complete shock. Six!

Lauren and David were then faced with a difficult decision; either they could reduce the amount of children, or keep them all.

The chances that all six babies would survive the pregnancy were low. To have six at the same time brings on a number of dangerous complications.

After much deliberation, Lauren and David finally decided to give all six a fighting chance.

Their doctors promised to do everything they could to ensure every baby was delivered safely. The hospital went through with a mighty effort to avoid complications associated with the birth.

Monday morning, April 23, 2012, the day arrived. Lauren was in week 30 of her pregnancy – children born before the 37th week are considered premature.

A total of 35 people from the hospital gathered inside the delivery room. As the birth got underway, the doctor needed the help of six nurses standing by to receive each baby as it came into the world. No easy task, and certainly one rife with stress.

“I was nervous and excited all at once.  It was starting to sink in that this was for real – I was going to have 6 babies,” Lauren said.

It took a total of four minutes to deliver all six.

Andrew, Benjamin, Caroline, Leah, Allison and Levi all weighed between 1 and 2 pounds at birth.

Lauren said: “I didn’t expect to see my babies until the next day, but each baby’s team rolled them by me one by one on their way up to the NICU, and I got to touch their little fingers.”

The children were not healthy enough to be with their parents for the first few days.

At four-days-old, Allison was the first baby in a stable enough condition to be held. It took the nurse ten minutes to get all the wires and monitors up so Lauren could hold her.

But what a feeling!

“And that moment, when I got to hold my baby, was when I became a mother…of sextuplets,” Lauren explained.

The first few weeks were crucial in the lives of the babies. Their parents still worried about complications that could potentially lead to disabilities or, in the worst case, death.

After many intense weeks of love and care from the staff in the neonatal facility, the family were able to hold all of their angels.

Five of the babies were able to go home at four-months-old. Little Leah had to stay in hospital for an additional few weeks, as she was the smallest and had struggled for space inside the womb.

“She was literally buried under everybody else in the womb,” said Lauren, “so she didn’t get the right nutritional flow. Her brain was not fully developed.”

The family has had an abundance of support from loved ones, which has helped them immeasurably when it comes to getting through the hardest and most difficult of periods.

Donations from others have also come in, both from family and complete strangers touched by the birth and Lauren’s story.

Lauren, of course, has high praise indeed for all the medical staff involved. Without them, the children may never have been strong enough to go home. “My doctor was the best and I’m forever grateful to him for the level of care I received,” Lauren says. “Also, the NICU staff who put in hours upon hours getting our children ready to come home and teaching us the ins and outs of preemie care.  So many of these people have a special place in our hearts and family.”

The family has adapted to a newer, more full-on way of life.

“We had to get very scheduled and very structured and organized, especially in the first year.”

The boys – Andrew, Benjamin and Levi – and two of the girls – Allison and Caroline – are perfectly healthy today.

Leah, meanwhile, has had things a bit tougher as a result of her brain not being fully developed prior to birth. She will probably needed to be care for by her parents for a long time to come.

That said, she has started school along with her siblings.

“She goes to general preschool for children with disabilities. But she always gives 100 percent and laughs all the time. She is our sunshine!” Lauren says.

We wish the six children all the very best in the future, and look forward to seeing how they’re doing in a few years!