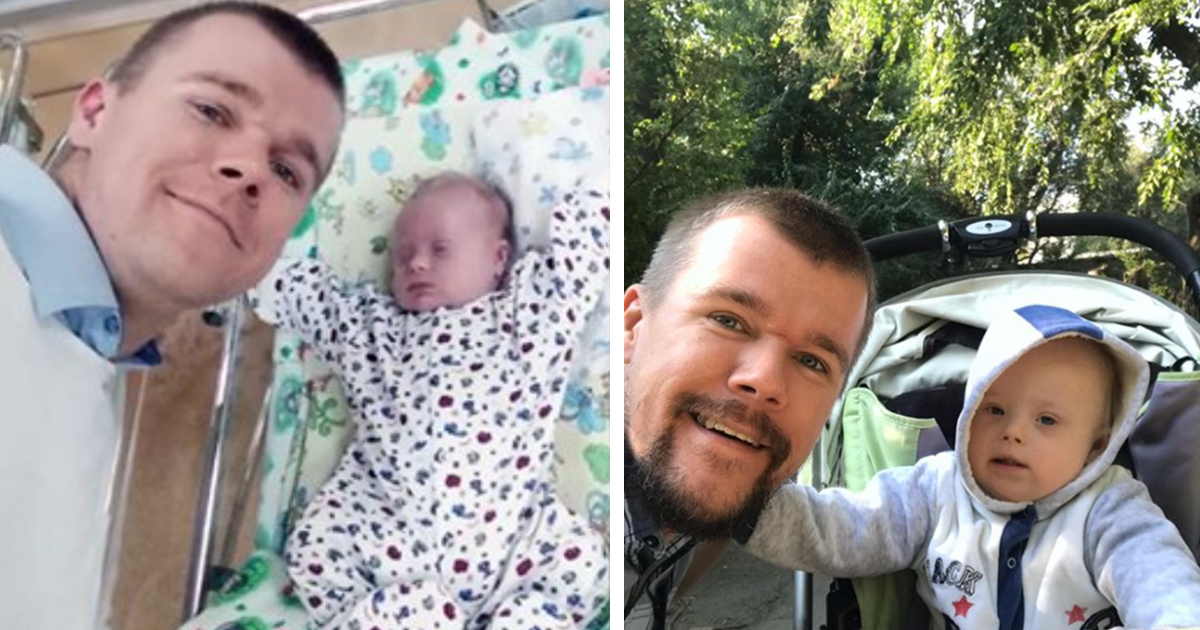 Everyday, thousands of babies are born around the world with conditions that make them stand out in some way. Of course, all babies are beautiful, and none are any less deserved of love, care and attention.

Sadly, not all people accept this fact. Some parents, incredibly, even look to give up or disown their children if they’re not deemed perfect in their judgemental eyes when they’re born.

Despite the age of understanding and reason that we’re supposed to live in now, many babies with Down syndrome are still born into uncertainty because of ongoing prejudice surrounding the condition.

One Russian father is looking to rid any and all stigma surrounding Down syndrome, while simultaneously independently raising his son, Misha, who suffers from the condition.

As per reports, 33-year-old Evgeny Anisimov is on a mission to show the world that children with Down syndrome are every bit as worthy of love and acceptance. He’s raising Misha single-handedly after his wife decided to leave because she couldn’t deal with her son’s diagnosis.

Evgeny and his wife were dealt the news just 1 minute and 39 seconds after their son was born when a doctor told them, “I fear that your baby has Down Syndrome”

Speaking to Bored Panda, the dad said: “I didn’t know what to do when I learned of the hypothesis that my son had Down Syndrome. I thought my task now was to turn off emotions, ignite thoughts, support my wife because I believed it would be more difficult for her.

“The results of the analysis we were promised in a few days, and until then, I decided not to say anything to her.”

He continued: “I remember that upon learning that my son has Down Syndrome, I left the hospital and cried, but not for long. Later, I was a little embarrassed by these tears. In my life, after all, nothing had changed, in general.

“I was still with two arms, with two legs, my professional knowledge had gone nowhere. My determination, activity, curiosity, and so on—everything was with me. Everything happened as I planned, my son was born. But the child is special, his life and future destiny are already very significant. And I’m roaring here! This is some kind of selfishness! Is it not fair? No, it is my responsibility. You did not have an amniocentesis—it is clear that the probability was low, but still. You wanted a child, so you took responsibility for it. After all, there are many options: autism, cerebral palsy, genetic mutations … And Down Syndrome is not the worst, as I learned later.”

That very same night, Evgeny began his research on Down syndrome.

“I learned that in Europe, people with Down Syndrome are well-socialized, can live and work independently,” he said. “But the decision I had already made was not influenced by that.”

For the new father, leaving his son simply wasn’t an option. Sadly, though, his wife didn’t feel the same.

“At no time did I think of leaving my son in an orphanage, that would be inhumane,” he said. He and his wife eventually separated, and now Evengy raises Misha alone.

He explained: “When a child is born, he asks the outside world: ‘Am I needed here or not?’ And I answer with certainty: ‘Son, you are needed!’ Being with him, even alone, is a normal act for a normal man. I emphasize—I am a normal man, not some kind of hero.”

It’s Evegny’s aim to raise awareness concerning Down syndrome, so that no future parent believes giving birth to a child with the condition is a punishment or hurdle that can’t be overcome.

He told Bored Panda: “I want all the articles about Mishka and me that are being published now to convey that idea to society and instill it. And I also want to support, inspire with my example those people who are or will be in the same situation as me. I try to communicate with those who are within reach, I correspond with those who are far away. I hope that those who have difficulties now, as it was for us, read about us. Have no fear! Everything will be fine!”

I don’t know about you, but I think people like Evegny should be praised to the high heavens. What an inspiring figure he is, and how lucky Misha is to have been blessed with him for a son.

Share this article on Facebook if you want to pay tribute to this father for putting his child’s best interests first no matter what!