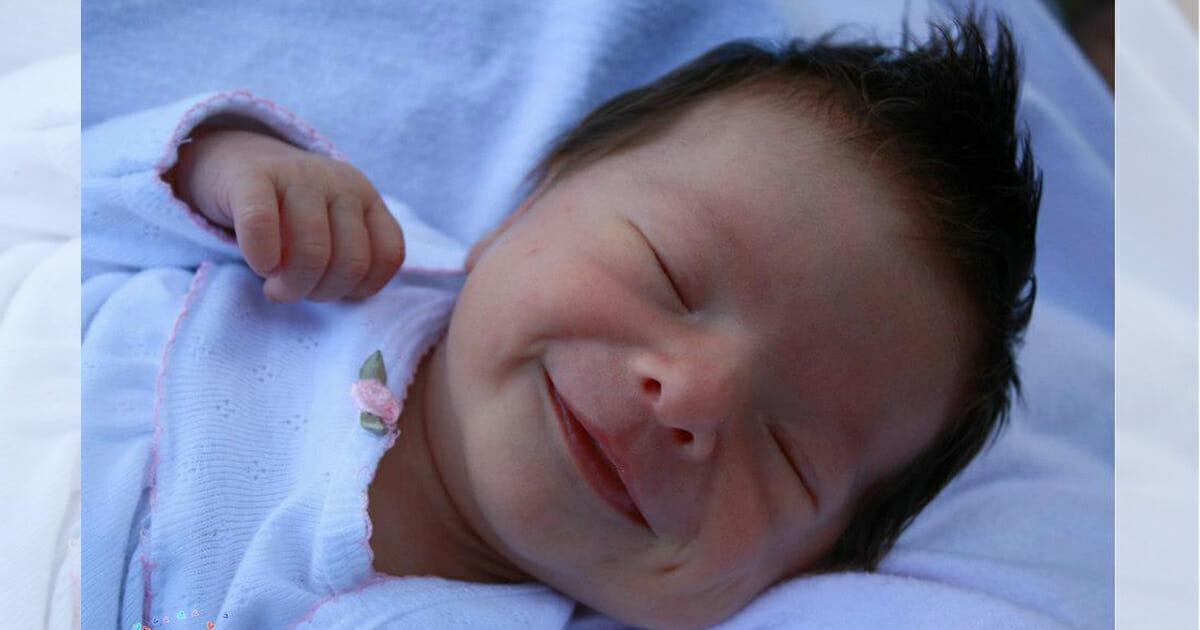 Seeing the light in your child’s eyes for the very first time is a significant moment.

After all, it’s the very first time that you’re seeing a half mirror image of yourself in many ways.

When Vanessa’s daughter Emmy was born, she practically came out of the womb with a big smile on her face.

But when her mother noticed how her baby’s fingers had a tendency to curl inward, she instantly suspected something was wrong.

A smile on a baby is a wonderful thing.

Just one glance at a cheeky ear-to-ear grin on a little one can turn the very worst of days into a manageable one.

Vanessa had already experienced three pregnancies by the time she was expecting Emmy.

Each pregnancy had its difficulties, but Vanessa knew more or less what to expect. When Emmy arrived, however, she had a certain uniqueness to her.

The little girl looked to have a permanent smile etched on her face. Vanessa was taken back by her daughter’s sheer happiness immediately after having been born.

It transpired, however, that the smile was a warning sign.

Time passed since the birth but Emmy’s smile never disappeared. Vanessa wanted to believe her daughter was simply overjoyed all the time, but when she noticed that the little one’s fingers always seemed curled inwards, she suspected something might be wrong.

She contacted doctors, who merely said she was “looking for things”.

Even so, Vanessa’s gut feeling remained. She did some research herself and discovered that if a child’s fingers are consistently angled inwards, it can be a sign of several different syndromes.

Emmy was sent home from hospital with a clean bill of health, though Vanessa was determined to get a second opinion.

She contacted a specialist who agreed to examine Emmy and, low and behold, the little girl was diagnosed with something called Williams syndrome.

As per Willams-syndrome.org: Williams syndrome (WS) is a genetic condition that is present at birth and can affect anyone.  It is characterized by medical problems, including cardiovascular disease, developmental delays, and learning challenges.  These often occur side by side with striking verbal abilities, highly social personalities and an affinity for music.

Since 2013, Emmy has had several heart surgeries. Mom Vanessa says she is doing well.

“The special days I have with Emmy aren’t the ‘big’ days like trips to Disney World, it’s snuggling on the couch on a rainy day,” she wrote, as per the Mirror.

Vanessa also said that many mistake Emmy’s smiling for her being happy all the time, though her mom wants to emphasize that her baby is a child just like any other; susceptible to changing moods and emotions.

“I’d love Emmy to be able to drive a car, go to college, and get married (if she wants to),” she said.

“To have a profession that she’s proud of, and I would like for her to feel valued at work. I’d like her to have a couple of good, solid, meaningful friendships. Above all, I’d wish for her to have unending happiness.”

Thank God Vanessa trusted her gut-instinct when doctors dismissed her fears in the beginning. A mother knows best most of the time.

Share this article to send prayers and strength to Emmy, she deserves them!