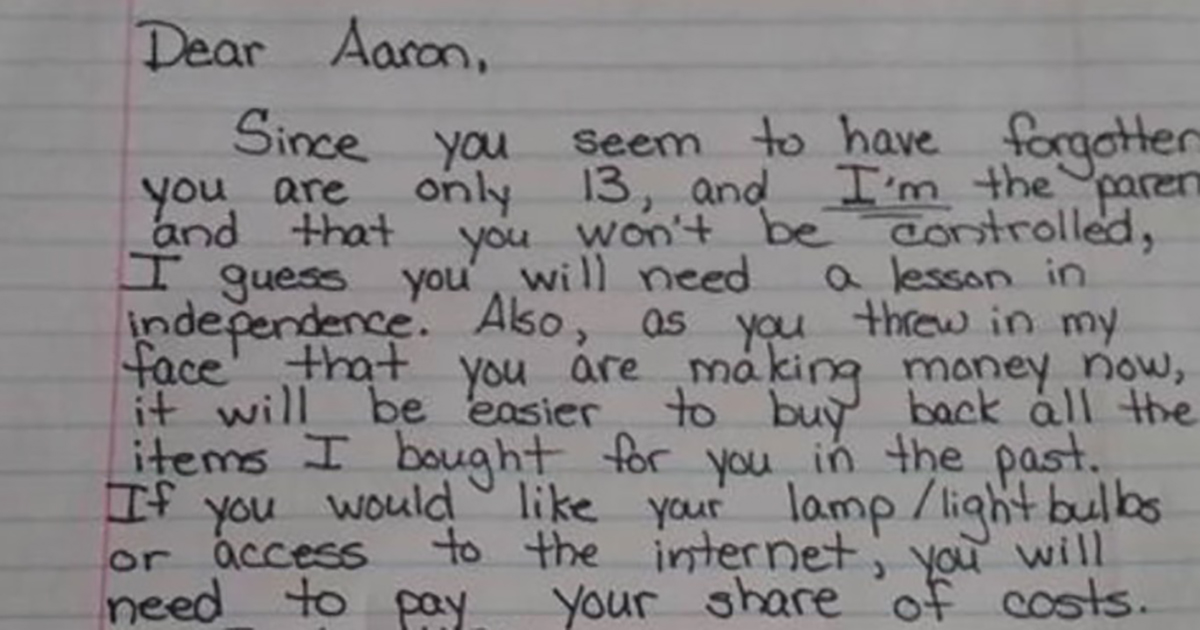 The debate regarding parenting and how children should be brought up is a discussion that has been going on for decades. As times change, so do the ideals and attitudes as to what is okay and what is not.

Through it all, though, I think some values are fundamental to maintain.

The discussion about respect and how to discipline your children is something that particularly stirs emotions. As a result, it’s understandable why Heidi Johnson’s note from 2015 still affects people.

Six years ago, the fed-up mom scribbled a few words to her “independent” son that blew up on social media. Some were outraged other Heidi’s letter, others deemed the note priceless. Read on, and decide which side of the fence you sit on.

As parents, we do everything to keep our kids in line and ensure good behavior. When your kids are young and always in your sight, it’s up to you to correct them and call them out when they’re misbehaving.

In 2015, 33-year-old single mom Heidi Johnson felt she had to do something drastic when she discovered that her son Aaron had been lying to her.

Aaron, then 13 years old back in 2015, had created his own YouTube channel and started to post videos. Apparently, things quickly went to his head.

One day when Heidi asked Aaron if he had finished homework, he lied, claiming that he had already done it. When Heidi dug a little deeper, though, it became apparent that her son hadn’t told the entire truth.

Aaron told her that he had a job to do, and that he thought it was more important than his school work. For Heidi, however, he was saying in no uncertain words that he didn’t respect her authority as his parent.

The mother realized that she had to do something drastic for her son to understand what was truly best for him. So she took a bold step to make sure he got his act together and decided to write him a letter.

This is what Heidi wrote:

Since you seem to have forgotten that you are only 13 and I’m the parent and that you won’t be controlled, I guess you will need to learn a lesson in independence. Also, as you threw in my face that you are making money now, it will be easier to buy back all the items I bought for you in the past.

Also, you will need to empty the trash Mon, Wed & Friday as well as sweep and vacuum those days. You will need to keep your bathroom clean weekly, prepare your own meals and clean up after yourself. If you fail to do so I will charge you a $30 maid fee for every day I have to do it.

If you decide you would rather be my child again instead of a roommate, we can negotiate terms.

After writing the note, Heidi took a picture of the letter and posted it on her Facebook page. The idea was to make it visible to friends and family, but Heidi accidentally made her post public, meaning the whole world could see it.

When she woke up the following day, Heidi had over 100 new friend requests. Naturally, she wondered what had happened. It turned out the photo of her handwritten letter had gone viral literally overnight; it had been shared by people all over the world.

After three weeks, the post had been shared an incredible 160,000 times. Not only that, but it now boasted 100,000 likes and 15,000 comments. Many parents appreciated Heidi’s tough love letter and some even contacted her for parenting advice.

“I had one mom message me about her 7-year-old that was having some behavior issues; so I spent several hours one evening compiling some tools and ideas that she could use,” Heidi told Today in 2015.

In the comments section, a lot of people took Heidi’s side.

“Love your letter and consequences for him disrespecting you!! I do the same for my 13 year old son and it seems to be the best parenting method I’ve found that works!!” one mom wrote.

“These kids think they are entitled to everything. I happen to like this little note,” another one shared.

Yet, at the same time, Heidi was heavily criticized for her letter by others. Some Facebook users thought it was wrong to shame her young son in such a public manner.

“[You’re] shaming your child and doing something to him that will last for the rest of his life,” wrote one user and continued: “You are a terrible mother and you should have your child forcibly removed from your home.”

Her son Aaron also reacted strongly to the letter, and he wasn’t happy.

“He crumpled the letter, threw it to the floor and stormed out of the apartment,” Heidi said.

It’s evident that Heidi wanted a reaction from her son – but she never expected her letter to get so much attention. Neither was she prepared for all the critical comments from parents.

“It does make me a little sad at times that moms are so quick to judge the actions of another mother [but] I can’t let the negative comments that others make hurt me or take them too personally,” Heidi told Today.

“I do appreciate that other mothers defend me. They are the ones that have either been there before themselves, or are able to take a minute and walk around in my shoes.”

However, the letter seems to have worked, and Heidi and Aaron have established a contract with rules that Aaron actually seems to be following.

Still today, Heidi’s famous note appears in people’s Facebook feeds, and parents still comment on it. Even though six years have passed, Heidis’ message is relevant – otherwise why would the note still be getting shared in 2021?

As of today, 165,000 people have chosen to share Heidi’s post. Many wonder what the mother and son’s relationship looks like now. Unfortunately, we can’t claim to be in the know regarding any updates to the story, but we hope all is well between Heidi and her son!

Do you think Heidi was too tough on her son, or was she right to put her foot down and post her letter online?