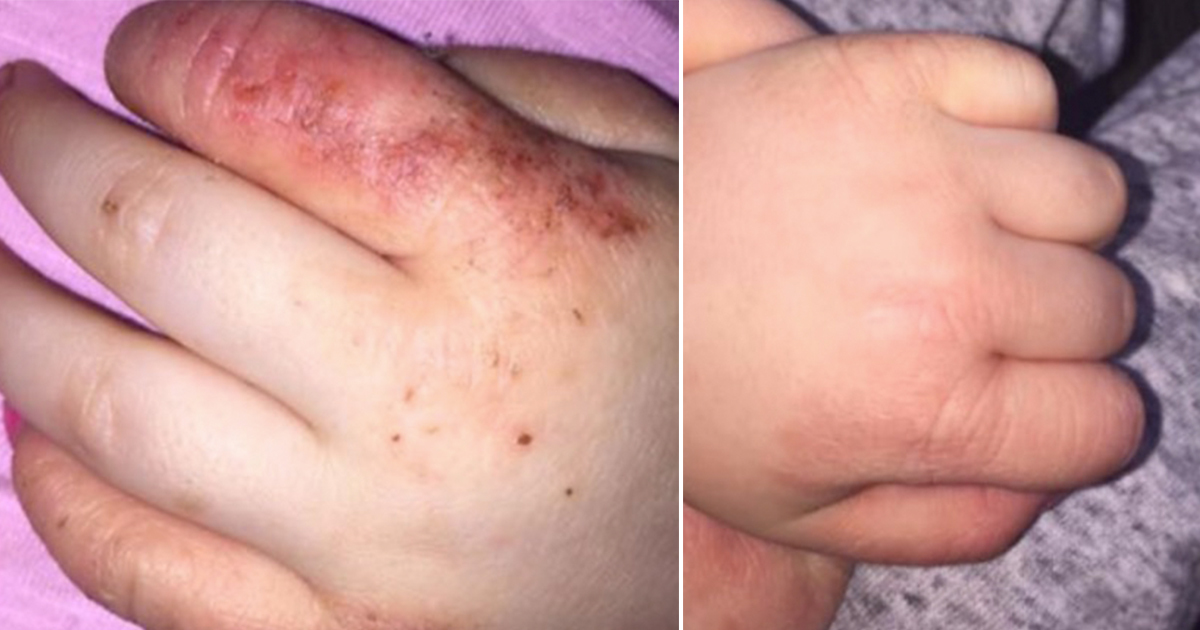 Mother Paige Sweeney spent over 2 years in every dermatologist office in town, desperately trying to help cure her daughter Evie-Rae’s horrible eczema. She was time after time let down and disappointed by every cream out there – there seemed to be no remedy. She was desperate and couldn’t stand watching her baby girl in so much pain.

“The toddler would wake up every night, scratching herself until she bled,” The 23-year-old mother tells MailOnline.

Then she found the cure on her own in a local pharmacy – and for 5 bucks!

Paige Sweeney lives in Nottingham, England with her beautiful little girl Evie-Rae, who is now 3. Sadly, just up until recently, Evie Ray was suffering from a horrific and painful eczema which seemed to be incurable. The mother had spent countless doctor visits and tried every remedy and creams including antibiotics and steroids.

Nothing seemed to help poor baby Evie-Rae and her horrible skin condition, which at times covered her entire body and face. It affected the baby’s overall mood and sleep – keeping her up at nights. Something had to be done.

One day Paige was at a local pharmacy and stumbled upon a regular baby skin cream on one of the shelves. Desperate and with no options left, she decided to give the cream a try to use on her baby girl. To her surprise, within a week the cream had pretty much cured her daughter’s condition. The eczema was gone! It was almost like a miracle cream.

‘I saw the moisturising cream on the shelf in Boots and decided to give it a go. Evie-Rae also has a nut, soya and egg allergy, so we have to be careful with what we give her, but I could see the ingredients were all natural.

‘Within a matter of days I could see her skin starting to clear up. I couldn’t believe it.’  the mother tells MailOnline.

The cream, which is named Childs Farm Moisturizer, costs around 5 dollars and is a regular cream which can be found in many shops in the United Kingdom. It can be purchased online as well – like on Amazon for example. It’s a dermatologist-approved cream with grapefruit, shea butter and tea tree oil.

Paige has been so happy with the product, she shared her story and discovery on her Facebook page to inform other parents – the post was shared over 30 000 times!

Evie-Rae hasn’t had an outbreak on her skin since she started using the cream. The miracle cream magically cured her condition! She can now continue being a happy little girl

Please share to inform other parents of this great tip!