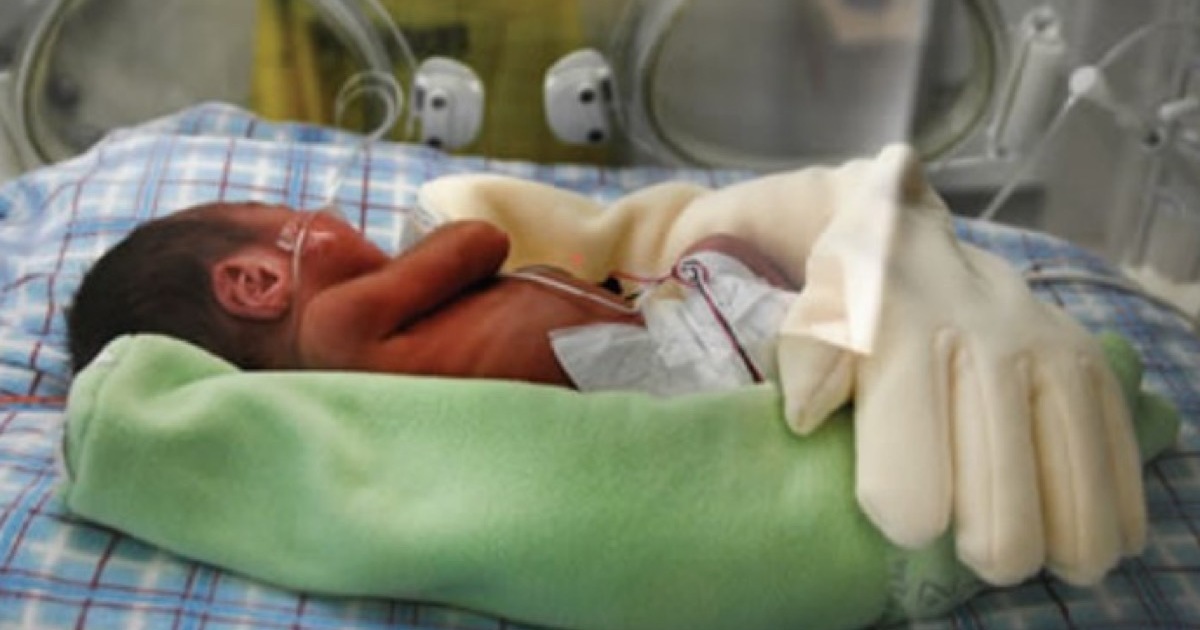 Unfortunately, due to unexpected complications, her tiny boy entered into the world three months early.

Zachary weighed just one kilogram and was forced to spend the next 155 days of his young life in the hospital’s neonatal intensive department.

Needless to say, mother Yamile was terrified. She never left her baby’s side, except at night when she wasn’t permitted to. Because she hated not being able to be near her son at night, she looked desperately for a solution instead.

That’s when she came up with an idea that would eventually change the lives of hundreds of other similarly premature babies.

In addition to being a new mom, Yamile Jackson also happened to be a doctor.

It was while washign dishes one day that she got her brilliant idea. She had desperately been thinking of a way her 15 week premature son could feel her presence at all times, even if she were miles away.

Knowing her baby slept in a sterile, cold environment all by himself every night was breaking her heart, as is the case for so many other moms of premature babies.

But as she stood washing dishes that day, she looked down at her rubber gloves. And then it hit her.

The next day, Yamile wore a pair of gloves all day, and when it was time to go home, she filled them with flaxseed and lay them gently down next to him.

The gloves were pleasantly warm and had also adopted his mother’s scent, so her son could feel that she was close all night.

When mother Yamile returned to the hospital the next day, she was stunned at what the nurses told her.

It turned out that that night, little Zachary’s heartbeat and breathing had improved compared to the nights before.

He had also slept through the whole night, without waking up once.

Yamile decided to call her new ‘invention’ “The Zaky”, and naturally, she made sure that her son slept with it every single night.

When it was at last time for Zachary to go home, the nurses wondered if it would be possible to obtain more gloves so that they could test this method on other premature babies in the ward.

Yasmine was fully on board with the suggestion and immediately began to produce more, lifesaving gloves.

The gloves quickly became a success. Hospital staff reported that Yamile’s gloves really worked, and had an actual impact on the babies.

And as more requests came, Yamile decided to create a whole line of Zakys, produced by Nurtured by Design.

Babies who sleep near their parents’ scent and the feel of a caring hand, are more tranquil and absorb more oxygen. For premature babies, this means a significantly greater chance of recovery.

The gloves’ positive impact on premature babies’ recovery have been examined in this study.

Today, both Zachary and Yamile are doing just fine. They often travel the country to showcase The Zaky gloves in the hope to encourage more hospitals to adopt its use.

Thanks to this small, premature boy, and a very smart mom, The Zaky glove has help thousands of children just like him!

Now that’s something to celebrate!