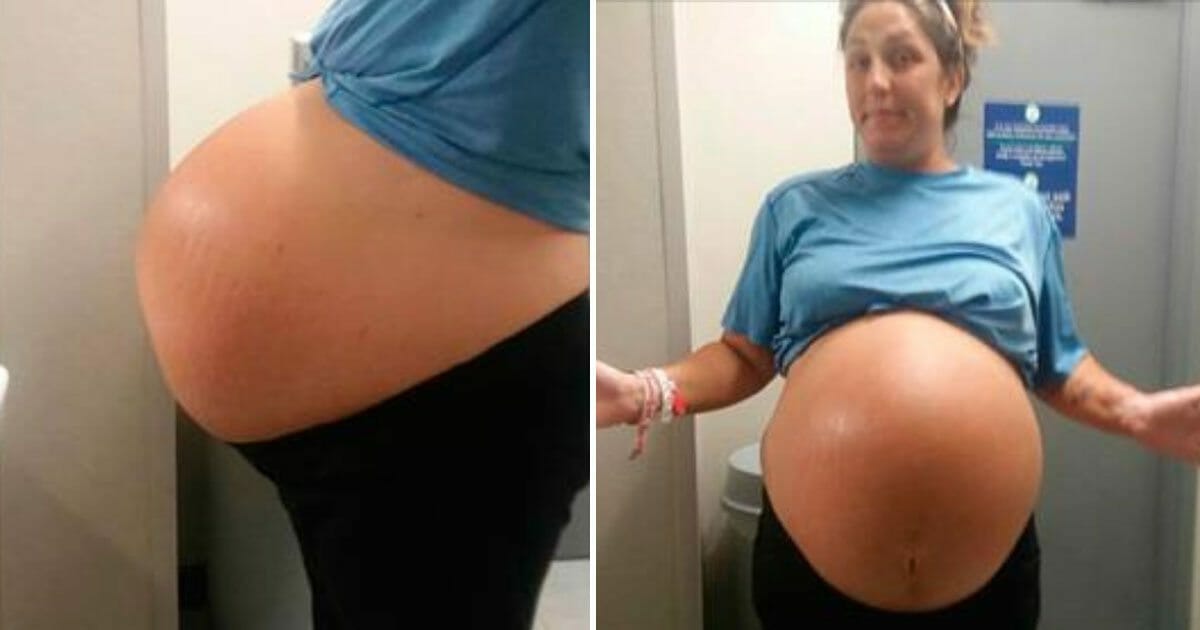 29-year-old Chrissy Corbitt is no exception – she knows very well what it’s like to be a mom. Her first two children weighed in on the large side at 9Ibs and 10Ibs respectively.

Nothing, however, could have prepared her for her fourth and final pregnancy …

Mother of four Chrissy Corbitt, of Florida, thought she’d seen and done it all in pregnancy when she was told she was expecting her most recent child. Pretty early on during the pregnancy, Chrissy suspected that the baby was going to be a big one. Of course, she could never have known just how big.

“The belly was getting bigger and bigger. It was like she had a huge beach ball and it was getting more and more inflated,” says the baby’s dad, Larry.

All of Chrissy’s previous children have grown bigger than the average, but none of them came close to the last, Carleigh.

Delivered by C-section on May 13, 2017, Carleigh weighed in at a whopping 13Ibs, 5 ounces. Safe to say it was enough to shock Chrissy, who had no idea just how big her baby would turn out to be.

“When the paediatrician showed her to me across the curtain, I was like, ‘Oh my gosh, she’s huge,’” Chrissy told Inside Edition.

And Chrissy wasn’t the only person who had been waiting for the child’s arrival. Every single person in the room was waiting with baited breath to see the size of her latest delivery.

When Carleigh finally got to see the light of the world, her mother received a round of applause. “I heard everybody cheering in the operating room. I’ve never had that happen before,” Chrissy said.

This was, of course, the beginning of a huge story for parents Chrissy and Larry. Baby Carleigh was so big that she couldn’t fit in the ordinary baby clothes that her parents had already purchased.

It was the same with the diapers. As is so often the case, her parents had prepared everything they could before Carleigh’s arrival. Then, after she was born, things changed drastically.

“All the stuff we bought leading up to her being born, we just donated to a local church,” Larry joked.

Although the situation was a stressful one for Chrissy and Larry, they managed to find a way to help others in need in a big way.

As Carleigh grows, she continues to be bigger than other children her age. At just three-weeks-old, she was wearing baby clothes meant to fit a 9-month-old!

It looks as though she’s definitely going to be a tall girl. Carleigh, however, is not the heaviest baby ever. According to the Guinness Book of World Records, there was a baby born weighing 22Ibs in 1879.

Apart from her special birth weight, Carleigh is a healthy baby who, apparently, is bursting with energy.

Chrissy says: “She’s just a happy baby, she smiles all the time,” Chrissy said. “I can’t get enough of her.”

Despite loving all their children equally, parents Chrissy and Larry have promised that Carleigh will be their last baby.

“That’s enough for me,” said Chrissy. “We’re going out with a bang.”

No one can deny that Carleigh is unique. In addition, she’s lucky enough to grow up in a family bursting with love.

Please share this story with all your friends and family.