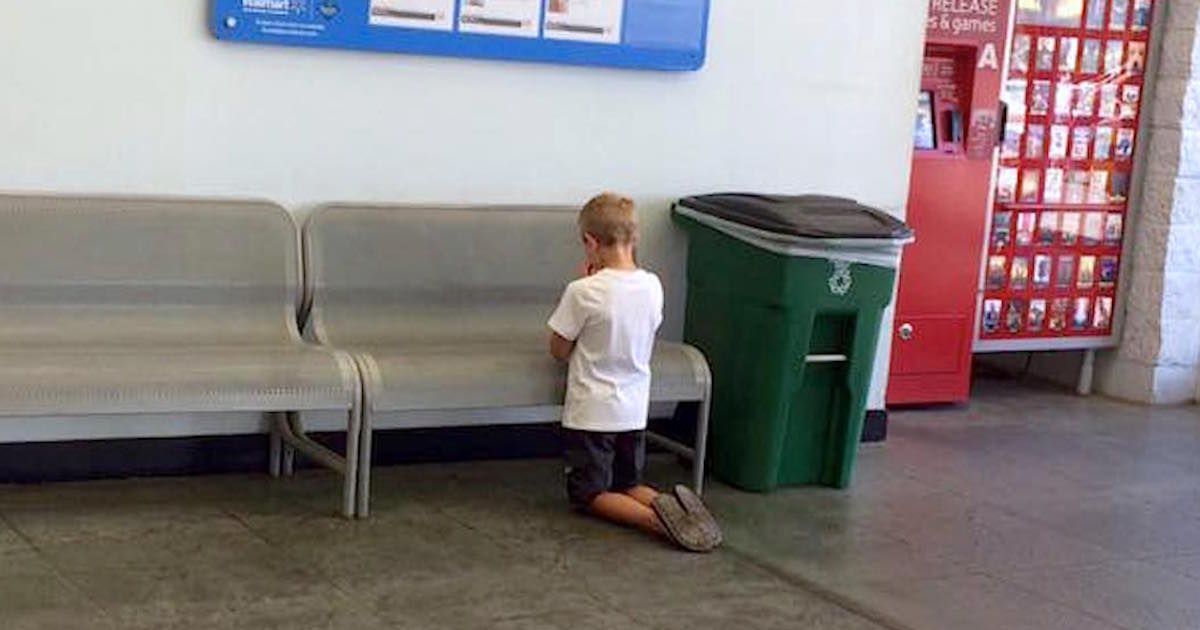 Young Braydon accompanied his mother one day to shop at major US food chain Walmart. They hadn’t been there long, however, before his mom was struck with panic. Braydon had disappeared.

After a few minutes of fear fuelled searching, his mother found him.

Her first instinct was to tell him off him for leaving her side. Yet when she saw him knelt down, praying in front of a sign board, she stopped to wonder just why. Then she took a closer look at the wall …

Losing a child, even if only momentarily, is every parent’s worst nightmare. Of course, it’s not an uncommon thing, especially in places where there are large crowds of people, such as shopping malls and big food stores. For Braydon’s mom, this was the case. She was in a hurry to get her shopping done quickly at Walmart – one of the world’s largest and busiest retail chains.

As per Faith Tap, Braydon’s mom said: “I had to run into Walmart. I turned around to make sure my son was next to me.”

Only, he wasn’t. Within a few seconds, Braydon had conspired to pull away from his mother.

When she eventually found him, Braydon was on his knees before a sign board. He was praying. She was surprised and so asked him what he was doing. After drawing closer to the board and taking a look, however, she got a better understanding of her son’s actions.

The board read: “Every second counts”. Beside those words were pictures of children who were missing. Little Braydon had left his mother’s side, seen the board and was praying to God that those children would return to their families.

The incredibly moving image, and the accompanying story, quickly went viral online. A Facebook page dedicated to Aubrey Jayce Carroll (a teenage boy who has been missing since 2016) spotted Braydon’s story and decided to post in tribute to him.

“I don’t know who this little guy is but I want to Thank you for praying for these children. One of those kids up there is my cousin Aubrey Carroll. This has surely touched my heart. If I knew where or who this kid was I would love to thank him personally.”

The image of Braydon kneeling before the board has since been shared over 115,000 times on Facebook.

According to the National Center for Missing and Exploited Children, roughly 800,000 children are reported missing each year in the US – a truly astounding number, I’m sure you’ll agree.

One Facebook commenter on the picture summarises it best: “Whether or not you believe in God really doesn’t matter. This was a child in Walmart who was thinking about others and doing the only thing he could to help. The world would be a better place if everyone followed his example.”

Like and share this article if you agree! Help us try and make the world a better place.