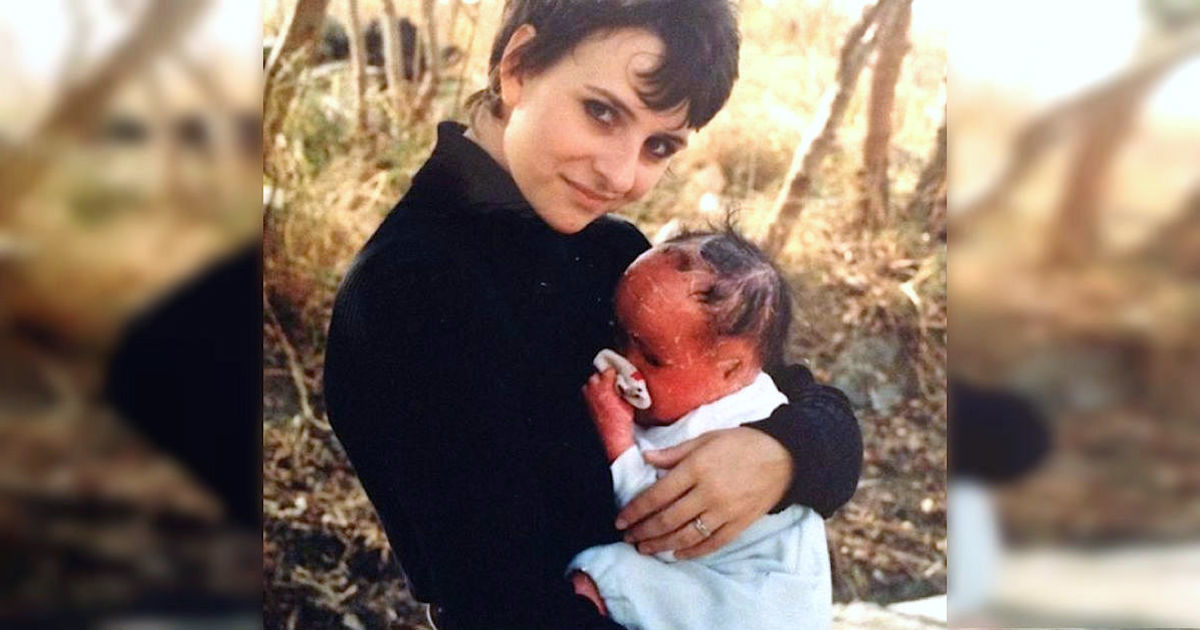 Rog and Tina Thomas met in Hong Kong and were soon engaged.

Five months later, the couple got married, and they were at the begining of a beautiful life together. They certainly knew they wanted children, but they weren’t in a hurry.

But when the couple accidentally met a little girl named Mui, everything changed.

Mui biological mother abandoned her because she didn’t look like any of the other babies at the maternity ward.

But Rog and Tina had the opposite reaction. When they met Mui, the couple immediately fell in love with the little girl with the bright red skin.

Mui suffered from a mysterious condition and doctors didn’t think she had very long to live.

Rog and Tina, however, refused to let Mui face her destiny alone.

“We wanted to give her a family life in the time she had,” says Tina Thomas told CNN.

The couple decided to adopt Mui when was three years old.

Ever since, Mui’s parents have been forced to live with the knowledge that their daughter could die at any time.

In 2002, Mui was finally diagnosed with Harlequin ichthyosis, a rare genetic skin disease that causes the skin to grow approximately 14 times faster than normal.

This means that she has had to live life with irritated, sensitive blood-red skin that easily becomes infected.

The disease is unbearable, and according to Wikipedia, only a few people with the disease have survived into adulthood.

But for every day that she’s survived, Mui has grown stronger mentally.

Still, despite her illness, Mui’s childhood was happy and she lived life with a big smile on her face.

“I really don’t think I knew that I didn’t look like everybody else,” Mui says.

But when Mui entered high school, her life took a turn: her classmates started bulling her.

They called her a “freak” and didn’t stop when school let out for the day. At night, the nightmare continued online, where the bullying was even worse.

Unfortunately, there isn’t a cure for Harlequin itchyosis, but the symptoms can be relieved and kept in check with ointments and various treatments.

The ointments need to be applied daily, but while Mui was being bullying, she tried to be “normal” and stopped taking her medications.

That only made everything worse, and Mui condsidered jumping from her family’s balcony.

Mui dropped out of school without a diploma, but she was still alive.

She says that the school didn’t push her enough and instead, allowed her to use her disease as an excuse not to work hard.

Mui then got a full-time job where she works with people with special needs. On the weekends, she trained herself to be a rugby referee.

“The doctors were convinced that our daughter would die. Now she is 22 years old and the world’s first referree with Harlequin itchyosis,” Tina says proudly.

Recently, Mui has also become an ambassador for the disease and travels around the world to talk about Harlequin ichthyosis.

Hopefully, her story can enhance understanding for everyone who is different and was born with the odds stacked against themselves.

Now, Mui is 23 years and is the fourth oldest person in the world with Harlequin ichthyosis, according to CNN.

She has truly surpassed all of her physician’s expectations in an incredible way and is inspiring people around the world.

On her website, The Girl Behind The Face, you can read more about Mui’s journey and follow her struggle to spread knowledge about this rare disease.

A big thumbs up to you, Mui! You are true example of how far you can go with a strong will and big dreams.