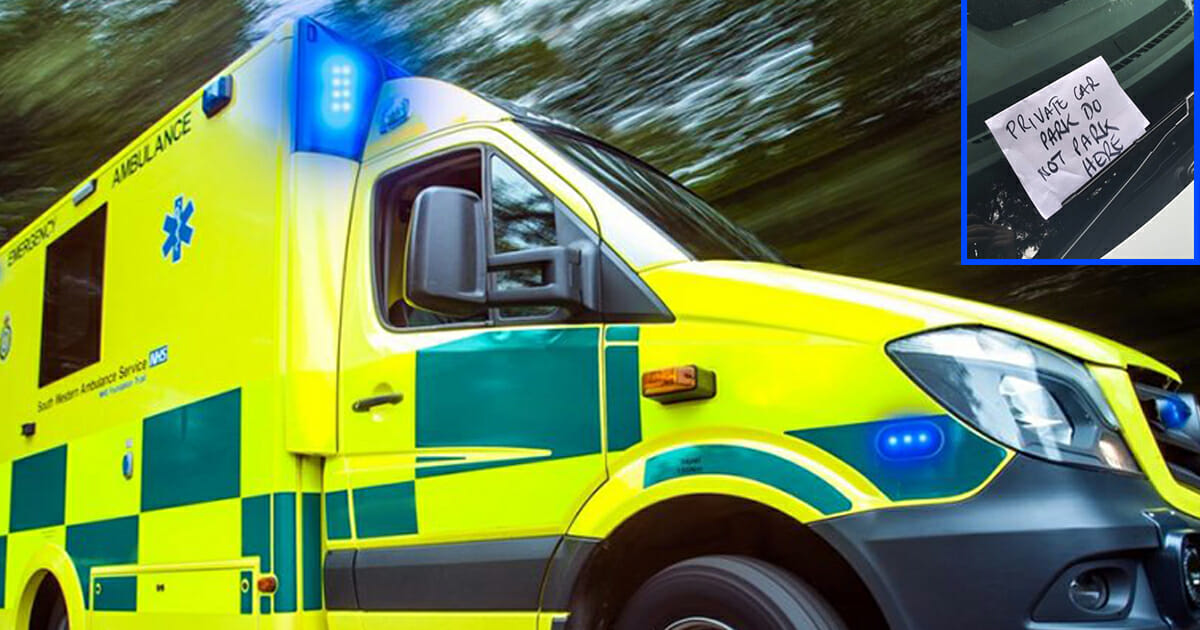 In recent years, it’s become increasingly common for people in the emergency services to be slandered and insulted in different ways. This is something we simply cannot accept.

There seems to be a lack of respect for the people who save and protect other people’s lives.

Unfortunately, we have seen continuous examples of people discrediting the importance of vital roles such as that of paramedics and ambulance staff. Take, for example, when an ambulance driver and her crew were slapped with a fine by company Q-Park as they tried to help an elderly person suffering from chest pains.

A similar case has gone viral in Britain, where ambulance staff in Bodmin got a very unfortunate surprise.

The note they discovered on their vehicle not only made the driver’s blood boil, but it seems to have evoked the ire of thousands online too.

It was at the end of March that ambulance staff in Bodmin, England, received a callout for someone who’d had a severe allergic reaction.

As is always the case, it was vital they got to their patient as quickly as possible.

According to The Sun newspaper, the patient in question was at risk of dying if the ambulance didn’t arrive on time.

After spending almost two hours working on the patient, ambulance staff returned to their vehicle to find a wholly unwelcome message. Someone had left a handwritten note, in capital letters, on the ambulance’s front window.

The message was clear: “PRIVATE CAR PARK. DO NOT PARK HERE.”

The driver of the ambulance posted the message to social media and described his feelings. Obviously the hospital was disappointed a member of the public would react in such a way.

According to the driver, the ambulance has a clear sign on its windshield that identifies it as an “emergency vehicle”.

“Just cleared from the 3rd and final call of the day, a patient with a possible allergic reaction. On scene for just under 2 hours then come back to the car to find this – despite the “Ambulance Service First Responder” sign clearly displayed in the window. Very disappointed,” Bodmin Responder wrote in his tweet on March 31.

Just cleared from the 3rd and final call of the day, a patient with a possible allergic reaction. On scene for just under 2 hours then come back to the car to find this – despite the “Ambulance Service First Responder” sign clearly displayed in the window. Very disappointed. pic.twitter.com/R8ckC7LuXE

In another tweet, the emergency worker expresses his frustration at having been instructed to move his vehicle while in the process of caring for another patient, on a different occasion.

“Further to the last tweet, the crew were also asked to move the ambulance whilst in the middle of treating the patient. Why don’t people realise that we are there to help you, which sometimes means parking wherever necessary – we’re not here to cause an inconvenience!”

“Some people are incredible”

Fortunately, many people have made a show of support for the ambulance crew. These people are those who have a better understanding of what’s really important …

Another wrote: “Ignore it mate. Very little point in entertaining a discussion with these people.”

A third: “This is becoming a common problem. Some people really have no compassion. If it was one of their loved ones or even themselves who needed I’m sure they would think differently about sticking a note on the window screen of the one who is treating them #unhelpful #nocomparison.”

Unfortunately, this problem doesn’t seem to be an isolated one. Remember, you should never sit idly by and watch ambulance staff be verbally abused or insulted.

Share this story if you think the behaviour is completely unacceptable. When an ambulance parks, it’s often to try and save someone’s life. Think before you act!