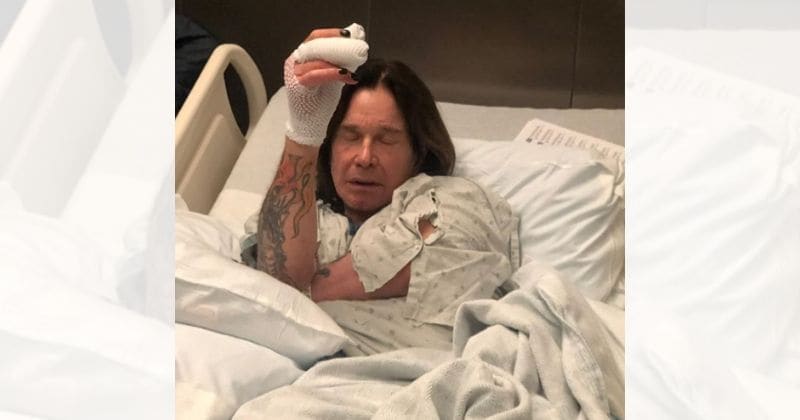 Ozzy Osbourne is making a steady recovery at home, having been rushed to an ICU in the wake of being diagnosed with an upper-respiratory infection that threatened pneumonia.

Only days ago there were fears that the rockstar’s health could worsen, but the latest – coming courtesy of RollingStone – is that he’s out of ICU and breathing independently.

Wife Sharon Osbourne supposedly told The Talk that her husband is doing well, and thanked fans for all their love and support.

I cant wait to get out of here tomorrow, thank you to all of the wonderful Doctors and Nurses taking care of me. #NoMoreTours2 Shows now: Oct 13 – Las Vegas @MGMGrand Oct 15 – @HollywoodBowl Oct 18 – San Diego @MattressFirmAmp Oct 20 – Mountain View @ShorelineAmphitheatre

70-year-old Osbourne, frontman of band Black Sabbath, had initially contracted a flu, though that quickly worsened and became a bout of severe bronchitis.

Tantamount amongst fears was that it could then develop into pneumonia, which, given his age, could have been fatal.

Sat Oct 6 show at @ShorelineAmphitheatre in Mountain View, CA has being postponed due to illness. The Rock and Roll Hall of Fame inductee and Grammy®-winning singer and songwriter is being treated for an infection, which required surgery on his hand this morning (Saturday, October 6). OSBOURNE will spend a couple of days at Cedars-Sinai in Los Angeles where he’ll remain under doctor’s care as they monitor the infection. The show is part of OZZY’s North American “NO MORE TOURS 2,” produced by @LiveNation, and is expected to resume on Tues, October 9 at @MattressFirmAmp in Chula Vista before this leg of the tour wraps with shows at the @HollywoodBowl (October 11) in Los Angeles and Las Vegas (October 13) at the @MGMGrand Garden Arena. @StoneSour will perform on these three shows. The Oct 6 show has been rescheduled for Tuesday, Oct 16 (support act for the new date is TBA). Ticketholders for the October 6 show should hold on to their tickets, as they will be honored at the rescheduled date on October 16. Refunds are also available at point of purchase.

As fans the world over held their breath, Osbourne was rushed to an intensive care unit for doctors to monitor him closely. Planned tour dates across the UK and Europe were cancelled, but it would appear now that he’s on the mend.

Wife Sharon issued the following statement: “He’s doing good, he really is. And I just want to say a huge thank you to everybody that has reached out with good wishes. He’s overcome by the response that he’s had and it just makes him, it’s kind of bittersweet because he’s so overwhelmed with it but he’s sad, too.”

As per Rolling Stone, Osbourne is planning to resume the aforementioned tour later this fall. He urged fans to keep hold of their tickets as they would be honored at the new dates, though refunds are available.

Here’s to praying the legend that is Ozzy Osbourne makes a full recovery! Our thoughts and prayers are with the Prince of Darkness.

Share this article to show your support for Ozzy!