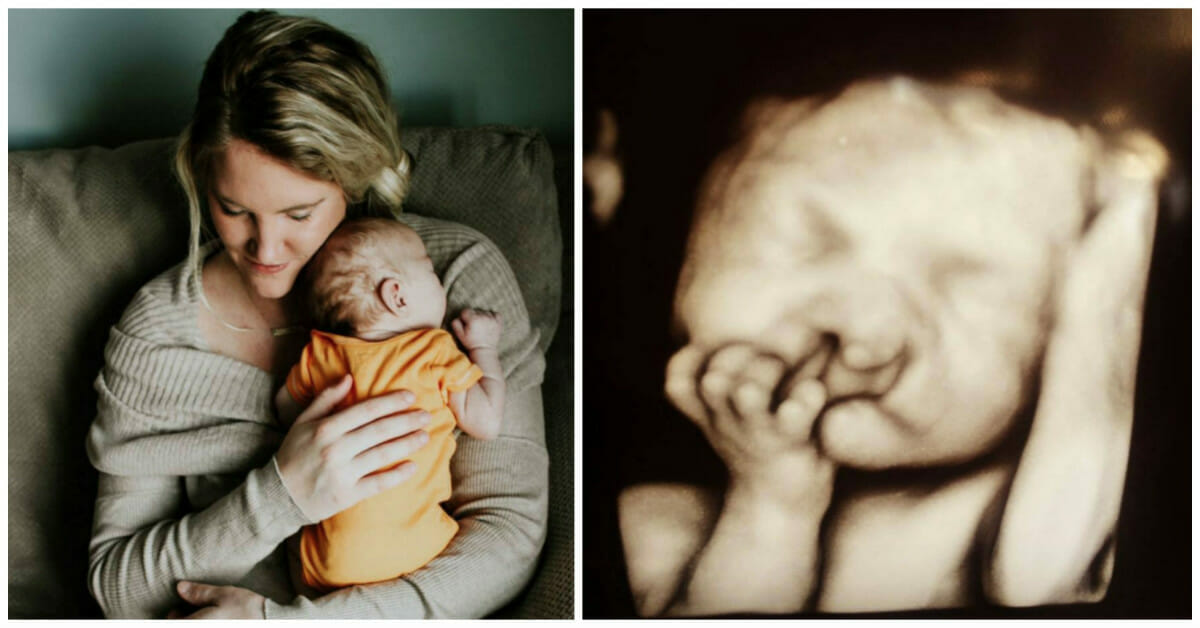 Welcoming your first child into the world is truly life-changing.

The love you experience is like no other, and you can’t help but pray that everything will work out for the best for your little one.

When Sara Heller welcomed her first child – a little boy named Brody – it was a huge relief, but there was also a lot of worry.

Sara and her partner Chris Eidam had discovered something about Brody when Sara was just 24 weeks pregnant.

Sara’s ultrasound showed that Brody had an especially severe lip and cleft palate. In some children it’s a small hole in the lip, but in Brody’s case the gap went all the way from the lip to the nose.

Of course Brody’s parents were full of worry when they saw the scan pictures, but they decided to do something completely different about their son’s diagnosis.

The doctors said that there were only 9 cases like Brody’s in the world.

“They asked us if we wanted to keep the pregnancy,” dad Chris Eidam tells Omaha News.

But Sara and Chris were adamant that they were going to have their baby.

Sara says that she wants to change the way people look at children with lip and cleft palates.

It is OK to be proud of your baby no matter the circumstances. We wanted to change what ultrasound/newborn/first year pictures on our Facebook/Instagram accounts looked like. We wanted to spread awareness of cleft lips and palates,” the mom tells Today.com.

It’s during the second and third month of pregnancy that the fetus’s face develops and the different facial parts grow together.

Around 2,650 babies per year are born with some kind of lip-, jaw- or cleft palates in the US. Experts are still trying to find out more about why this happens, but it is known that family genetics play a role in about one-fifth of the children affected.

Sara and Chris, who couldn’t afford an operation, were determined to change people’s perceptions of lip and cleft palates.

Sara has received many insensitive comments on Instagram after uploading pictures of her son.

”What’s wrong with his face?”

Sara says that she wasn’t just shocked about the comment, but she also wasn’t prepared to have to defend her son’s appearance while he was just a newborn baby.

“I decided to educate rather than create a confrontation because that is what I want Brody to do in the future, I will want him to educate, to be an advocate for younger cleft kids who don’t have their own voice yet,” Sara tells Today.com.

But, not every encounter has been negative.

One evening not so long ago, Sara was out for dinner with Brody and some of her friends.

When everyone had eaten, Sara’s server snuck something onto the table that looked like a napkin. However, Sara soon discovered that it was a folded up check.

The mom could hardly take in what she saw. There was a check for USD $1,000 along with a note; ‘For your beautiful baby’, according to Today.

The gesture brought Sara to tears.

“Tears fell from my eyes immediately and the happiness my heart felt is indescribable,” Sara says.

The generous and surprising gift helped Sara and Chris pay for some of Brody’s healthcare costs.

Since Brody’s condition does require extra care — as cleft lips and a cleft palate can make it harder for a baby to eat, drink, smile, talk, and sometimes even breathe — Sara and Chris put the money towards Brody’s medical expenses and the surgeries needed to correct his condition.

Brody is healing well and has more operations ahead of him when he is between 9 and 12 months old.

Thanks to skilled doctors and surgeons, Brody will be able to eat and talk in the future. Meanwhile, until the next surgery, both parents are very grateful for the kind gesture they received.

A surprising gesture from a stranger made a big difference to this family, who needs all the support they can get!

And your heart just melts seeing this wonderful and happy baby! I’m sure the future looks bright for this little boy.

Thankfully, his parents knew that there’s more to a child than just the way they look and obstacles are meant to be overcome.

With such loving and wise parents, Brody will go a long way! And his parents are as precious as thier beautiful child.

Sometimes the world is a very nice place and a stranger’s gesture can make a very big difference!

Let’s make Brody’s story an example of generosity and kindness. Share it if you also think that all children deserve love, respect and the best chance in life, no matter what they look like!