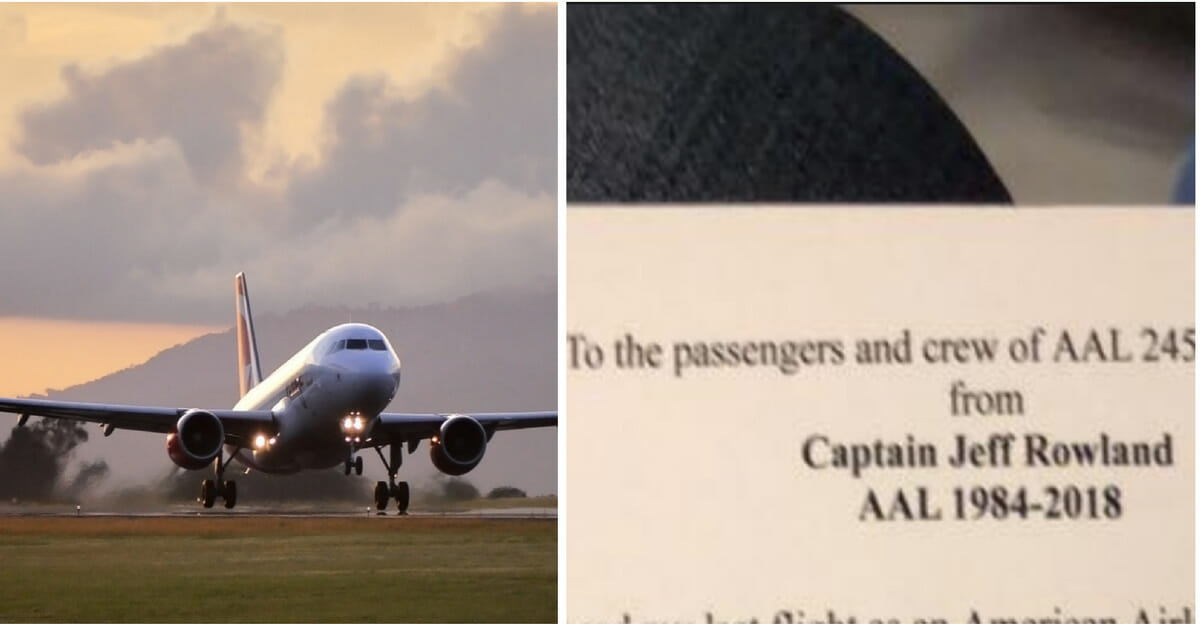 Unfortunately, there are many professions that never really get the recognition they deserve. The obvious ones are so often the people who help us each day; nurses, policeman, firefighters. It happens just the same with other, less-celebrated roles, like bus drivers, train drivers and pilots.

When you stop to think about it, how often have the latter group taken us from point A to point B safely, sometimes during the most uncomfortable of working hours? It’s a sad truth that many take these people for granted.

Take, for example, pilot Jeff Rowland of American Airlines. During his 33 years in the industry, he has flown over 10,000 flights and transported over 2 million passengers. And yet hardly anyone knows the name of the man who took them safely to their dream vacation; to their important business meeting or perhaps home to see their family.

One day, earlier this year, Jeff decided to hand out a letter to the passengers before taking off. The letter acknowledged that this was to be his last flight; his final farewell as a pilot.

For 33 years, Jeff Rowland was able to do something many only dream of – travel around the world and get paid for it.

This flight, one morning in January 2018, would be his last.

Passengers aboard a plane between Los Angeles and Dallas were handed Jeff’s heartwarming letter. It was posted on the net and carries a message straight from the heart.

For Jeff, it was the right time to finish his service. Just one last flight to sign off and move forward with his life.

Despite Jeff knowing that plenty of people see flights as a necessary evil; despite knowing that people have a lot to complain about, he wanted to thank everyone who had travelled with him over the years.

“Thank you from the bottom of my heart. AA only made on big mistake I can think of with me… they paid me, and I would have done this for nothing.”

Jeff’s letter seems to have hit people right in the feels.

What’s even better is that Jeff got such a positive reception for the farewell he deserved. His family was seated in the first-class for the trip, and the plane was adorned inside with streamers and balloons. Then, when it landed in Dallas, they were greeted by a celebratory arch of water cannons on the tarmac. What a nice touch!

Captain on my LAX-DFW flight this morning was piloting the last leg of his 33-year career. His family was in first class, and inside of the plane was festooned with streamers & balloons.
In Dallas, we were greeted by a celebratory arch of water cannons on the tarmac. Touching. pic.twitter.com/qIsnzonO9B

Even though Jeff knew not everyone has an abundance of praise when it comes to flying, he chose to thank them all anyway. It makes me warm inside that he got the farewell he deserved and was rightfully acknowledged with celebrations.

Never forget to pay attention to the every day people who do so much for us. A big thank you to Jeff and all the other pilots out there!

Please share this article to pay tribute to all the hard working transport professionals of the world!