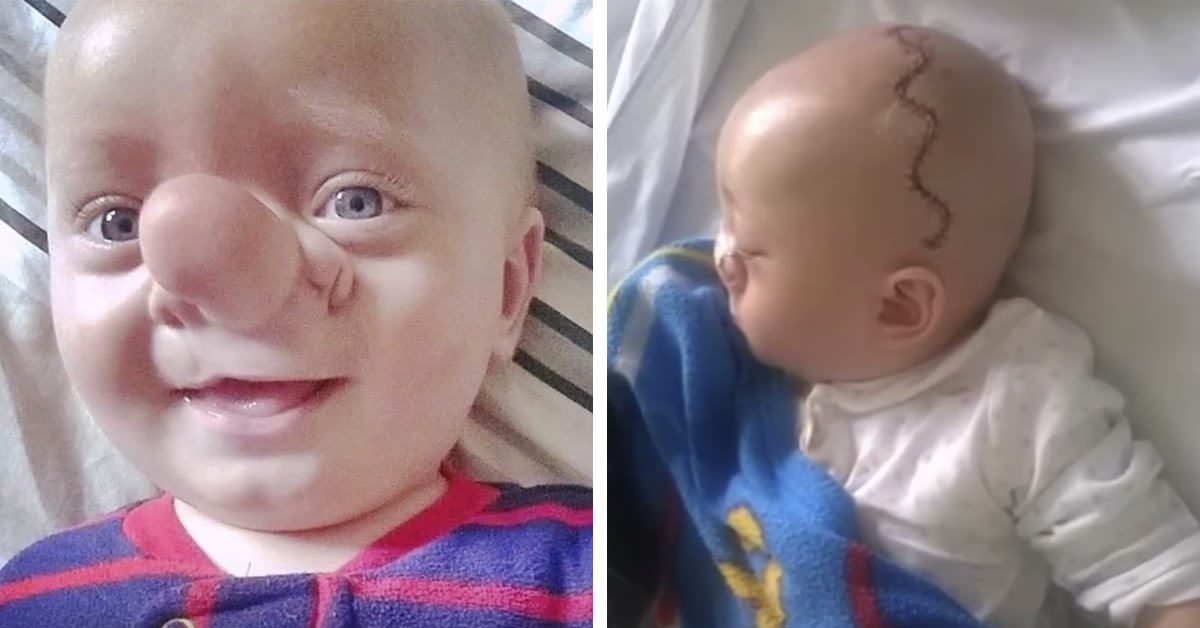 Imagine if we could learn to accept and see the beauty of each other’s differences, instead of singling out and mocking those who look a little different.

I think that would make the world a better place to live in.

The good thing is that it is possible to change our attitudes and the stereotypes that surround people who do not look like the norm.

Hopefully, the story of little Ollie can inspire many to try to make our world a better place, one small step at a time. Amy Poole received shocking news during her second pregnancy. As early on as the ultrasound, Amy’s doctor saw something unusual on the little boy’s face.

In the 20-week scan, the doctor saw that Amy’s son had soft tissue growing uncontrollably around his nose.

Amy knew that her son wasn’t going to look like other children but still, nothing could prepare her for the shock that would overcome the delivery room in February 2014.

Even though she had studied the ultrasound intensely, Amy was taken aback when her son came into the world at the University Hospital of Wales.

”When they handed him to me and I held him for the first time, I was so overwhelmed I could hardly speak,” she told the Daily Mail in 2015.

The boy, who was named Ollie, was born with a condition called ”encephalocele”. A rupture in his skull had caused his brain to grow through a hole in his head and through his nose.

The condition is extremely rare, only 1 in 10,000 children in the United States are born with this defect every year.

Despite his unusual appearance, Amy did what any mom would do — she loved her son unconditionally.

It didn’t make any difference what people, family or friends said or which obstacles would come in her way: Amy was determined to put her son above everything else.

But it hasn’t been an easy ride for Amy or Ollie.

People stare at the little boy and call him ugly, which has broken mom Amy’s heart more times than she can count.

There’s one comment in particular that she will never forget. A stranger told her that her son should have been born dead.

”To me Ollie is perfect. He’s my little Pinocchio and I couldn’t be more proud of him”, says Amy.

Luckily, Ollie has received support from many, both within his family and good-hearted people.

Most people realize that he is like any boy, just with a bigger nose.

With his bubbly personality, big sister Annabelle is even a little jealous of her brother.

”He and Annabelle are best friends – they’re always playing around. Annabelle is jealous that Ollie gets so much attention,” explains Amy.

First, Mom Amy was hesitant to let her boy be operated on, but doctors said he was in danger of infections such as meningitis.

All operations went well, thanks to some incredibly skilled surgeons. Today, at 3-years-old, little Ollie is doing well.

Amy also has a message to all who comment on her son’s look:

“I do not want other children to receive the kind of comments Ollie has and I think the best way to combat this is by educating people. I would rather have people asking why Ollie looks like he does, instead of just telling me he is ugly or pointing and staring.”

What a beautiful family, with great values ​​and strength despite cruel comments and stares!

Make sure you share if you think Ollie is a super cute guy, just the way he is!