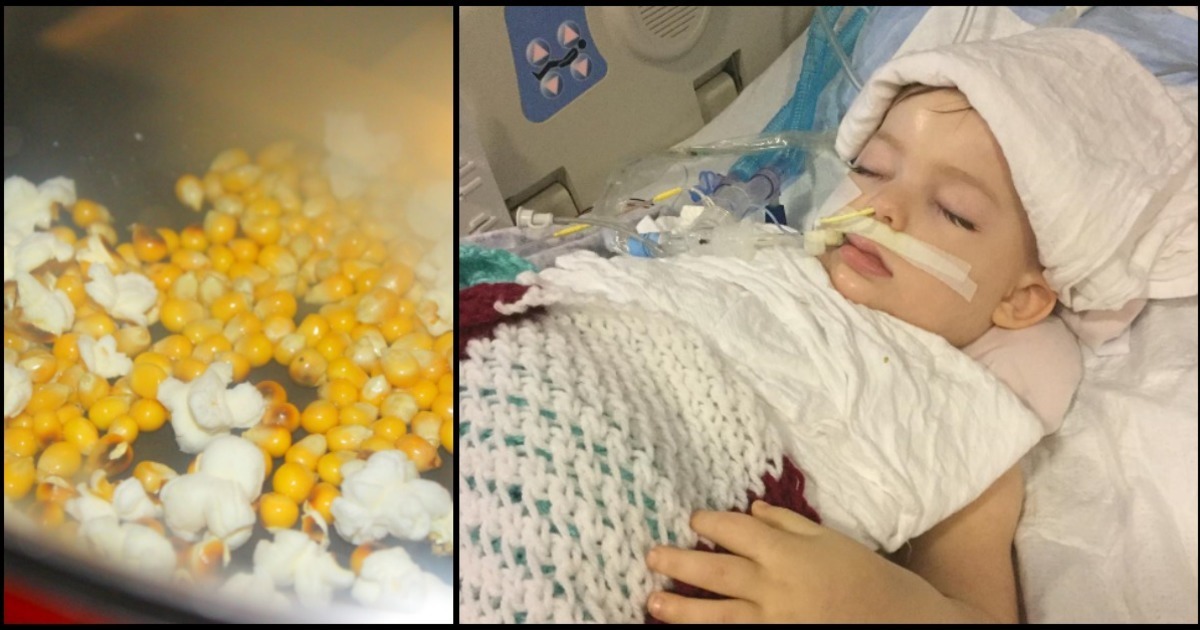 Mirranda Grace Lawson was three years old when she passed away in November.

Back in March, the little girl was celebrating her mother’s birthday when she choked and went into a coma. Mirranda was hospitalized and put on life support and her parents fought for her life until the very end.

And now that Mirranda is gone, her parents are raising awareness about the choking hazards that young children face every day.

Because all it took to bring an end to Mirranda’s life was a single kernel of popcorn kernel.

Mirranda Grace Lawson died in November, but her struggle began six months earlier, in May, 2016.

Alison Lawson, Mirranda’s mother, was celebrating her birthday at home with her husband, Patrick, and their children when the unthinkable happened.

According to Mirranda’s GoFundMe page: “At the end of Alison’s birthday, Mirranda ran in to the living room. Eyes huge, no sound. Time stopped. Those were the last moments they shared before Mirranda fell to the ground; they swept her mouth, nothing; Pat started CPR. The ambulance got there. Mirranda’s heart stopped.”

There was nothing in Mirranda’s mouth, but a small popcorn kernel had gotten lodged in her windpipe and choked her.

On the way to the hospital, paramedics managed to get Mirranda’s heart pumping again.

But, the little girl’s family had no idea how serious her injury was.

When Mirranda arrived at the emergency room, she was immediately put on a respirator.

Her family kept their fingers crossed, but tragically, Mirranda’s doctors soon realized that the 3-year-old was brain dead.

The hospital suggested that the family turn off life support, but they wouldn’t give up on their beloved little girl.

The Lawson family fought with the hospital to keep their daughter alive, and the case ended up in court.

Hope was running out, but the Lawson family decided to try the case in the Virginia Supreme Court.

While the wheels of justice slowly turned, Mirranda lay there in the hospital.

She was closely monitored by warm-hearted nurses, who also took the time to make the sweet drawing above, with Mirranda’s footprint.

But even if Mirranda’s mom and dad fought hard to keep their little girl, the court was slow to make a decision.

Mirranda’s health suddenly deteriorated and she died in November with her heartbroken family at her side.

Now, it’s up to us to honor Mirranda’s memory and raise awareness about choking hazards so that other children don’t meet the same fate.

How to lower the risk of choking:

* Keep small objects out of children’s reach.
* Make sure your child sits still while eating—moving and having something in their mouth is always a bad combination.
* Don’t let children eat in the car or when on a bicycle— there could be sudden bumps.
* Take extra care if your child has a cold. Objects are more likely to get stuck in their throat during that time.

If a child is choking, use the “five-and-five” approach:

1. Place the child on their stomach on your lap.

2. Hold the child’s stomach with your forearm and hold their head up by supporting their chin. The child’s head should be lower than their body.

3. Deliver five back blows between the child’s shoulder blades with the heel of your hand.

1. Turn the child over on your lap and hold them with her forearm. Support their head with your hand. The child’s head should be lower than their body.

2. Place two fingers in the middle of their chest just below the nipples.

Alternate between five blows and five thrusts until the blockage is dislodged.

The least we can do is help share this important information with everyone we know. Let’s honor Mirranda’s memory and make sure that no child or family has to go through this again!