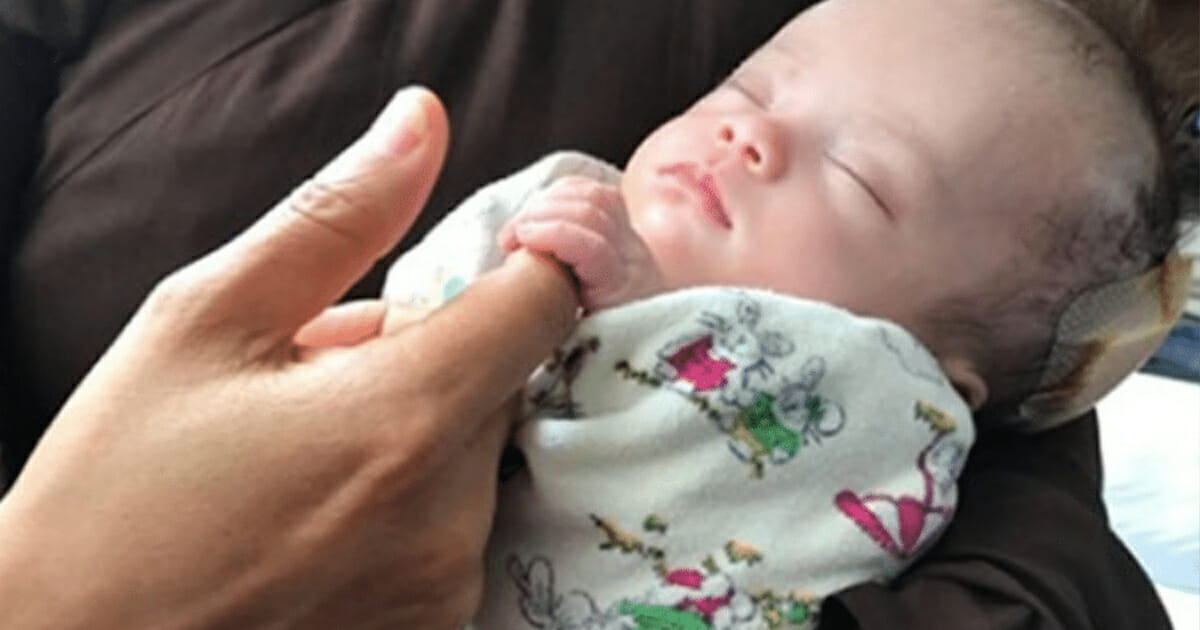 The gift of life is something so incredibly special that it baffles me people can take it for granted.

Much in the same vein, I don’t think I’ll ever understand how anyone could even consider abandoning their baby somewhere, let alone actually go through with it. Now, I know I’m not alone in this, I know it’s not a radical thought, and yet there do exist people on this planet who are ready and willing to place a defenceless baby in a remote location and simply walk away.

Sadly, such happenings are far from a rare occurrence in certain parts of the world. One more recent case, coming out of Vietnam, has garnered particular attention due to the state of the baby when she was found.

According to reports, little Trieu Hoai An was found inside a plastic bag tied to a tree.

She had been exposed to the sun for several days, bitten by mosquitoes and she had a wound on her head infested by maggots.

Greetings to all, I am Venerable Minh Tai (abbot of Hue Quang Pagoda). If anyone would like to contribute to baby Hoai…

According to Channel News Asia. on March 29, a farmer at work in a coffee plantation heard soft cries nearby.

Soon after that, a baby was found tied to a coffee tree in Lam Dong Province, an impoverished region in the Central Highlands in Vietnam.

The baby had been left exposed for several days without care, and was in a terrible condition when found. Doctors feared she might not survive, and if she did she wouldn’t see out a year.

Fortunately, help was at hand in the form of Venerable Minh Tai, abbess of the Hue Quang Pagoda, close to where the baby was found.

Venerable Minh Tai has taken in more than 100 orphans over the years, giving them a safe place to rest and grow until a foster family is found.

After hearing of the little girl’s case, Venerable Minh Tai adopted her. She used Facebook to spread the message, aiming to make the world aware of the girl’s tragic fate.

Tai managed to raise an incredible $25,000 to pay for the necessary medical bills, having sent out a plea to social media users and Buddhist temples around Vietnam.

The girl was named Hoai An, which means ”forever peace” in Vietnamese.

Little Hoai had multiple health problems, including dangerous levels of fluid building up in her brain. Nevertheless, doctors did all they could to restore her to health.

In April, Hoai was transported to Mount Elizabeth Hospital in Singapore for treatment.

Dr. Tang Kok Kee, a neurosurgeon leading the team treating Hoai, told the Straits Times: “I wouldn’t write her off at this point; that would be wrong. There is a chance her condition will improve.”

But although Dr. Tang Kok Kee maintained hope, sadly, it wasn’t to be.

Hoai fought hard and her health improved slightly, but sadly she passed away in June.

The baby was at the Hue Quang monastery in Vietnam when she stopped breathing in her sleep.

“The winds of impermanence have shaken the last succulent leaf off the branches of life, with no time for a new plantlet to sprout,” said Venerable Minh Tai.

“May you soon be reborn into a better world.”

The hospital in Singapore, where Hoai Ann was treated, also made a statement.

“She was a spirited baby who fought bravely despite her condition. We would like to extend our condolences to Venerable Minh Tai and her caretakers,” they said.

“May Hoai An rest in peace.”