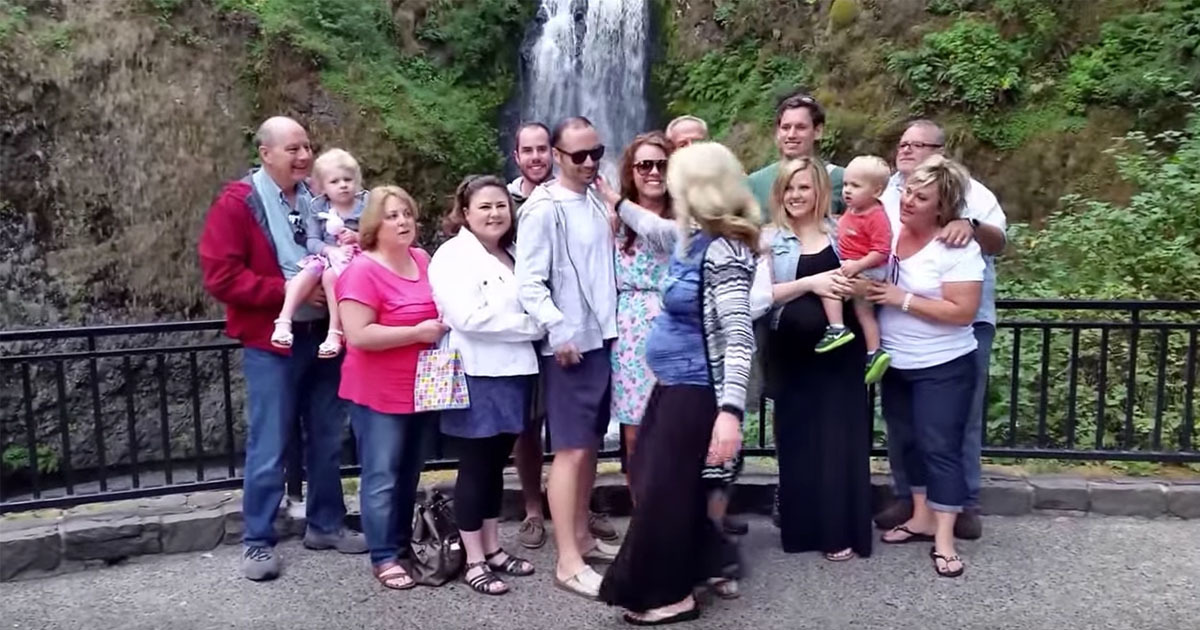 In 2013, Holly and Darren lost their twins, Brinly and Jude, at just 18 and 21 weeks old, respectively. The following year, the couple went with their family to beautiful Miltnomah Falls in Portland, Oregon, to hold a memorial service for their little ones. In the video clip below, the whole family is having a group photo taken at the waterfall when a pregnant stranger arrives and stands in front of Holly and Darren. When the couple tells the rest of the family who the stranger is, everyone is shocked and their reaction is the most wonderful thing I’ve seen in a long time!

After Holly and Darren’s twins passed away, one of the couple’s friends volunteered to be a surrogate mother for them. They couple decided to go through with it and their surrogate soon became pregnant.

But Holly and Darren waited to tell their family until the surrogate mother was 24 weeks pregnant. And with a big family trip planned, the couple decided to reveal the news in a brilliant and unexpected way: while the whole clan was at Multnomah Falls getting their picture taken together.

When everyone was in position for their group photo, a pregnant woman in a blue top walked right into the frame and stood with the couple in the front.

You can imagine the confusion that caused and the tense atmosphere that arose from it.

Holly had the surrogate mother’s husband secretly film everything as she and Darren reveal that the strange woman is actually their surrogate mother and she is going to have twins.

When Holly and Darren saw their surrogate mother receive a warm welcome from their family, they both broke down in tears.

“It was one of the most amazing things a human could have done for us. The lady that did it was 46 at the time and refused to take any money from us. In fact, we had agreed we would pay all medical bills, but her and her husband paid for the $5,000 C-section bill as a gift,” Holly told Little Things.

On November 14, 2014, Holly and Darren welcomed twins, Noah and Beckom into the world.

“I cannot express how much this woman and her family have changed our lives,” Holly told Little Things.

Watch the amazing video below and see if you can hold back the tears. I certainly couldn’t!