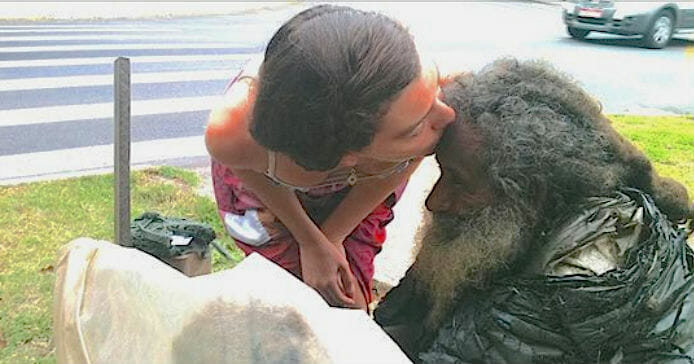 For 35 years, homeless Raimundo Arrudo Sobrinho lived on the streets. During the days he tried to write short stories and poems, though his material was never read by anyone.

Day after day, Raimundo continued to write. Like many poets and authors, he hoped his words would some day be published all over the world – but who wants to take a chance on a homeless dreamer? Not many, as it happens.

However, in spring 2011, Raimundo’s life changed forever when it met a woman named Shalla.

Shalla couldn’t help but be curious about homeless Raimundo, who always sat with a pen. Every time she passed by, he was writing things on old pieces of paper.

One day, Raimundo finally gave one of his poems to Shalla. She was so struck by the man’s incredible ability that she created a Facebook page to share his talent with the world.

Neither Raimundo nor Shalla could have ever imagined what it would lead to.

When his poetry and stories went public, an unexpected person came forward from the shadows …

Raimundo is a 77-year-old man who has lived in the streets of Brazil for an awful long time.

He was born in the countryside but moved to the city of São Paulo when he was 23. There, he worked as a gardener and a book dealer.

However, Raimundo became homeless during the military dictatorship that troubled the country in the late 1970s.

He spent 35 years on the streets, but never gave up on writing poetry and short stories. His work went unknown to the outside world, but that didn’t deter him.

Despite the fact that life on the streets was tough – Raimundo’s clothing consisted of black bags and he “lived” by a busy road – he held one true passion.

Raimundo sat in the same place every day; passers-by had no idea why he was so obsessed with his wrinkled pieces of paper.

The locals who walked by assumed he was just a dirty, old man who had fallen on hard times and had no interest in helping himself.

However, Raimundo kept putting pen to paper; kept dreaming that one day his work could be published.

Then, in 2011, a young woman named Shalla Monteiro befriended him.

Each day she would have a conversation with him, until eventually he was willing to share some of his poetry with her.

Shalla was blown away by the work – so much so that she created a Facebook page in a bid to present his material to the world.

As soon as Raimundo’s writing hit the net, he received a wave of support. Locals sought him out, gave him generous gifts and supported him with encouraging words.

His Facebook page grew and grew, until eventually Raimundo had 100,000 new fans.

The fame was only a small part of it all though. One particularly special person saw Raimundo’s face on Facebook and recognised him. It was his missing brother.

The brother immediately contacted Raimundo and invited him to move into his house. What good luck to reunite with each other after so many years apart!

For the first time in an incredible 35 years, Raimundo got a chance to take a bath, have a shave and groom himself.

Today, Raimundo has a home and is comfortable when he goes to sleep each night. It’s truly wonderful what a simple gesture can accomplish.

“The Conditioned” is a critically acclaimed documentary that follows the remarkable journey Raimundo made from rags to riches!

Of course, it’s not just in Brazil that people live homeless lives on the streets.

There are people just you like and me who, often for reasons out of their hands, are resigned to lives consisting of dirt, hunger and cold.

They’re humans; they too dreams, talents, feelings, ambitions, just like any other.

The least we can do is show that we care and lend a helping hand when the opportunity presents itself. Thank you Shalla, for showing us what a little kindness can do. We hope it ultimately creates a chain reaction that continues to change people’s lives through the power of positivity.

You never know what a kind act could do to change the life of another person. So be kind; you may be meeting an angel!