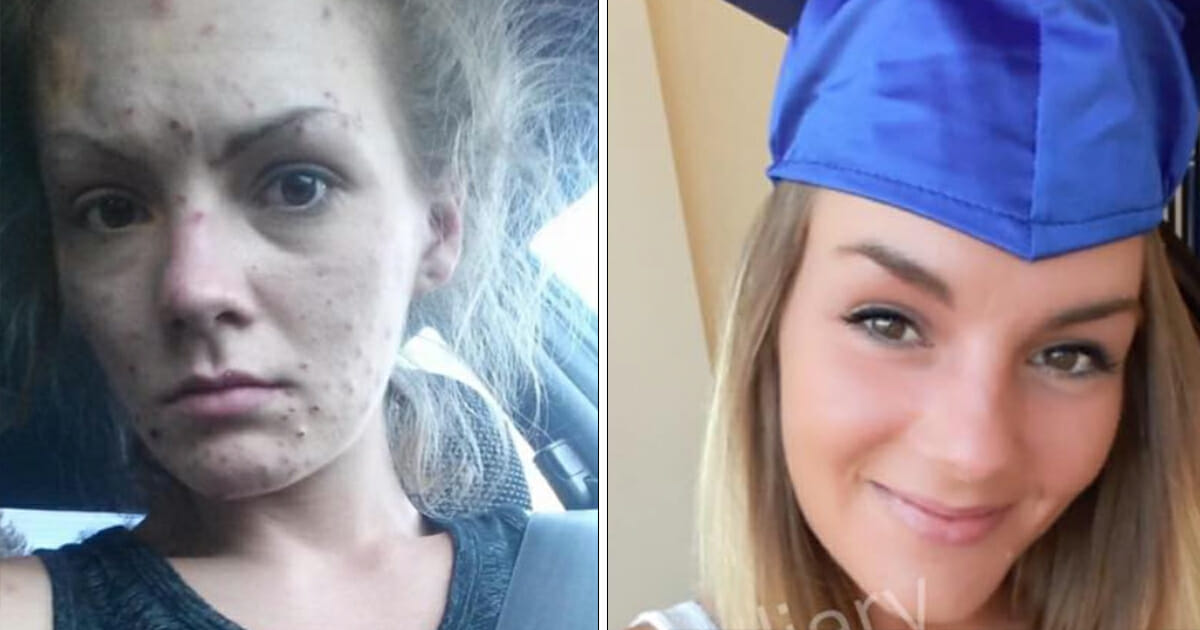 We’re always taught that it’s never too late to turn your life around.

Though it may seem as though you’ve taken too many wrong turns, that the odds are stacked so highly against you that overcoming them is impossible, that is very rarely the case. With the right support and mindset, you can make changes to beat whatever personal battle you’re facing.

Jamee Valet can certainly vouch for that and her story shows that there is hope for everyone.

The 25-year-old recovering meth and heroin addict from Sweet Home, Oregon, made waves on the internet after posting a series of dramatic before and after pictures.

Valet’s images were shared on the Facebook page The Addict’s Diary, where people are invited to post their recovery journey.

She explained how she overcame addiction to turn her life around – she’s even gone on to receive her GED diploma.

“My name is Jamee and I am a recovering heroin and meth addict,” her post reads.

“These pictures are 2 years apart. The better looking version of me being just a few months ago when I got my GED!

Valet now has ambitions to become an aesthetician, having fought to lock her demons well and truly in the past.

Her drug use progressed from smoking pot at 13 to taking pills including Vicodin, Morphine, Oxycodone, Dilaudid and Percocets at 15.

After dropping out of high school and being raped by two men in one night aged just 17, she moved on to heroin and meth.

“I was traumatized and depressed from the rapes, and the first thing I did the day I walked out of the door was met up with some guy,” she said.

At 19, she was arrested for the first time for trying to rob someone’s house. She would go on to be arrested a further five times, and also try to take her own life in jail.

“Suicide was my escape plane my whole life,” she explained.

“When I was in jail for the first time, I didn’t have drugs to numb myself and my actions kept catching up to me.”

A long and difficult path to recovery saw Valet relapse several times, but she’s now been clean for a year and has moved in with her boyfriend, whom she met during a year-long inpatient programme.

Well done, Jamee! You’re proof that people can beat the chips when they’re down, no matter how bleak things look.

Good luck on your new journey. Wishing you health, happiness and prosperity❤️