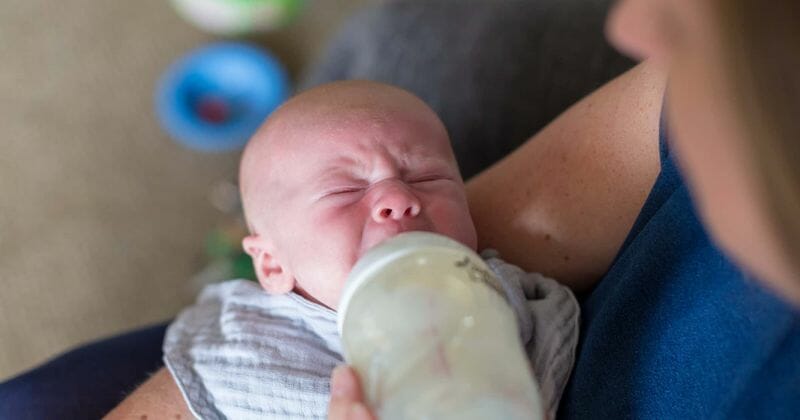 The world is a truly terrifying place to live in.

Just when you think the news couldn’t take a further turn for the depressing or dangerous, something comes along that takes you by surprise.

According to reports, scammers have been tampering with baby formula products in supermarkets and grocery stores, with police having been alerted to the trend after a number of babies fell ill.

? THE DROP ON WATER – NITRATES ? High #nitrate content in drinking water poses a concern, particularly for infants as it can impair the blood’s ability to transport oxygen around the baby’s body – a condition known as #methemoglobinemia or blue baby syndrome. How Does Drinking Water Get Contaminated? Agricultural activities, such as spreading #fertilizers, are the major reason for nitrate #contamination. The areas close to livestock facilities and sewage disposal are high risk areas for nitrate contamination. Since nitrate is highly leachable from soil, groundwater is the major source for contaminated drinking water. In the U.S., more than 50% of the population uses groundwater as the drinking water source while the remaining 50% uses surface water from rivers and lakes. Who Needs to Be Concerned? In general, all people need to avoid consuming nitrate-contaminated drinking water. Nitrate and nitrite can react in the body to form #nitrosamine, a known #carcinogen. ➡️ #Babies less than four months old. Infants this young lack methemoglobin reductase which converts methemoglobin back to hemoglobin. ➡️ #Pregnant women have been reported giving birth to infants with birth defects after consuming nitrate-contaminated water. ➡️ #Nursing mothers can pass the high level of nitrate to infants. ➡️ #Olderadults with declined methemoglobin reductase activity and people with the enzyme deficiency can develop. LEARN MORE ➡️ shopnaiad.com #WaterRestortationByDesign #WellWater #CleanFreshSafeMatters #AgricultureRunoff #NitrateFree #BabyFormula #NursingMothers #EnzymeDisorder #Elderly #babygirl #babyboy #newborn #breastfeeding

NBC News report that in most cases, parents couldn’t guess what was making their little one ill, though it’s now being suggested that individuals have purchased baby formula, removed the contents, replaced the product with flour and returned the goods to the shelves.

Madeline Roque, from Charlotte, North Carolina, realized something was wrong when her nine-month-old, Adeline, fell sick.

“Yesterday, she was a completely different baby…” she said.

“She was throwing up throughout the day passing a lot of gas… I just knew something was wrong.”

Adeline was crying, throwing up, and refusing to drink her bottle. It wasn’t until Madeline looked closer at the baby formula she had purchased that she began to stitch the pieces together.

“I looked at the milk and I [realized] something’s definitely weird,” Roque said.

“The color [was] different, the texture was different.”

Determining something was off, Roque decided to do an experiment. She dissolved some of the product in a glass of water. After letting it stand for a while, she realized the mixture had separated from the water, unlike the product she usually purchased.

“And then when I poured it the bottle into the sink I saw how it got, that’s when it hit me,” she said.

“I saw how it clumped up and I’m like oh my god my daughter’s stomach is just the same or worse.”

It’s Roque’s opinion that the formula was not baby formula, but flour. She informed Walmart, who confirmed that their store policy dictates no products returned to the store are to be placed on supermarket shelves.

There’s just nothing like that morning bottle, after you wake up. It’ll put you right back to sleep again, he he??? #my_reborn_melody #reborn #rebornbaby #rebornroleplay

Obviously, we don’t have to explain the dangers associated with this sort of product tampering. If you’re feeding your baby formula, always ensure the product is properly sealed and undamaged when you buy it.

Baby formula should always dissolve in water without separating – if it doesn’t, then investigate the matter further and report it to your local supermarket immediately.

We want to spread Madeline’s message so that no babies are potentially placed in harm’s way.