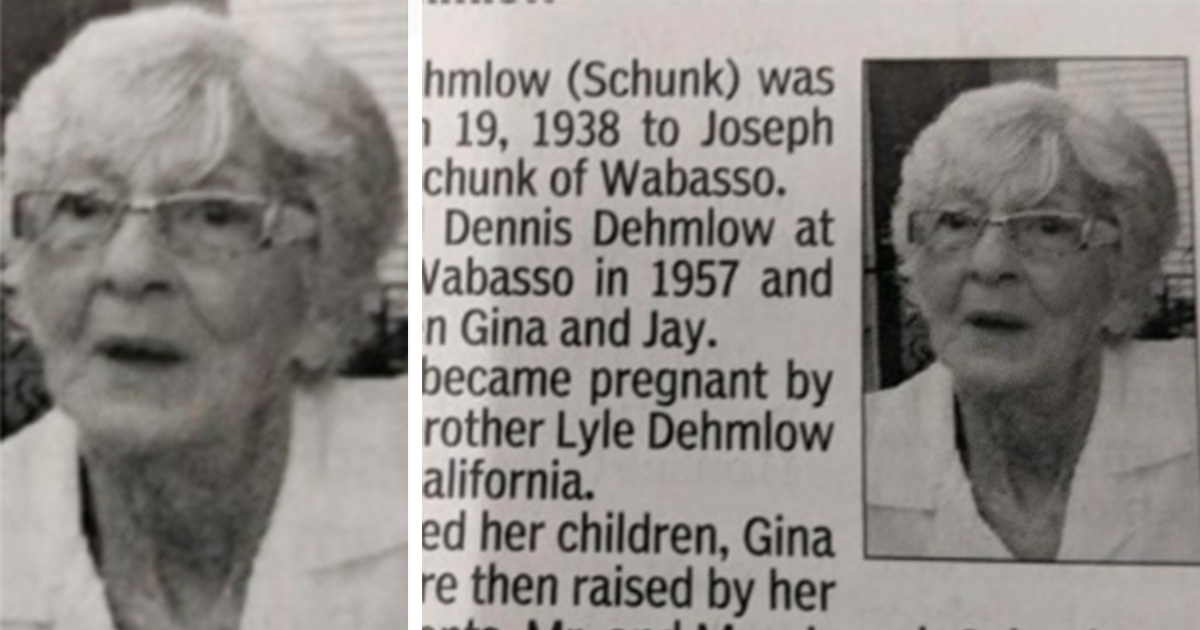 It read like a normal obituary, honoring the life of a loved one who has passed, but the last few paragraphs of one Minnesota woman’s obituary left readers shocked causing it to be shared around the world.

The obituary of Kathleen Dehmlow was published in Redwood Falls Gazette and seems to follow the same protocols of all other obituaries: she was born in Springfield, Minnesota to parents Gertrude and Joseph and passed away on March 31, 2018 at the age of 80 years old.

According to the obituary Kathleen married in Minnesota in 1957 and had two children Gina and Jay.

It’s then her ‘tribute’ takes a dark turn stating in 1962 she became pregnant by her brother-in-law and moved to California, and “abandoned” her two children in the process, leaving them to be raised by her own parents.

“She will not be missed by Gina and Jay,” the obituary concluded, as “they understand that this world will be a better place without her.”

The Gazette reportedly took the obituary down from its online site the following day after public outcry over its harshness.

But shortly after Kathleen’s son Jay Dehmalo explained his and his sister’s actions saying nobody could possibly understand what they went through and they wanted to get the last word.

Jay said his mom rarely visited him and his sister Gina and said she had two other children with her brother-in-law, according to Fraser Coast Chronicle citing the Daily Mail.

He said he and his sister “didn’t have so much as a card from her. I remember she came home twice and on one occasion she was showing pictures of her and her kids playing cards, drinking beers.

“Gina and I were standing in the room, just standing there and she didn’t even acknowledge us,” he said. “It’s like we didn’t exist.

“You can’t believe the dysfunction of the family,” he added “They’ll never know what we went through but it helped us [to write this]. We wanted to finally get the last word.”

Kathleen’s surviving sister Judy told DailyMail.com that her nephew’s obituary was “nasty” and had “hurt the family tremendously”.

But Jay said his extended family had no idea what he and his sister went through back then adding “nobody talked about anything.”

Whatever people’s opinions of this rather harsh obituary none of us can really know the pain that Gina and Jay experienced when their mother left them to carry on a new life without them.

What do you think of this obituary? Please leave your comments below and don’t forget to share this story.