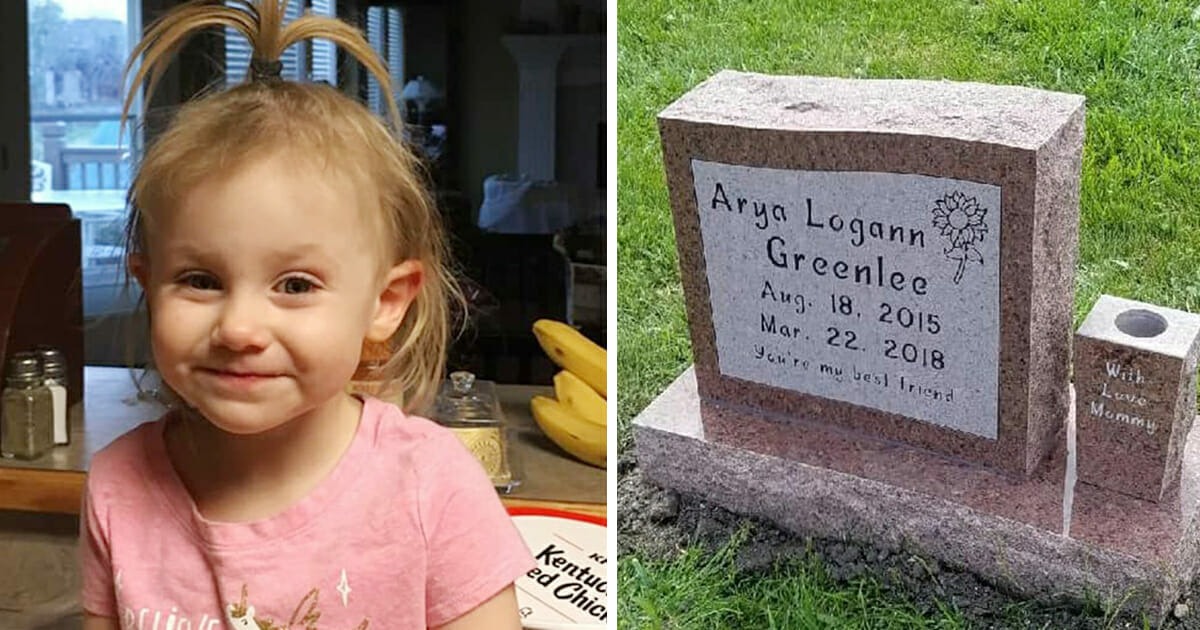 In fact, it could be said that she’s still living the worst nightmare of her life.

In fact, it could be said that she’s still living the worst nightmare of her life.

It wasn’t until September 17 that Sierra Greenlee felt ready to share the tragic story with the rest of the world. She did so in the hope that it might save the lives of other children.

Sierra took to Facebook to document the terrible tragedy that befell her and her family:

“I have avoided this post for awhile, it is long but hang in there I promise it is important. I would like to share with you the worst night of my life,” she writes.

“Not because I want your pity, but because I would like to inform you on an issue that is very important and no one really thinks about.”

It all started when the mom finished work and went to pick up her daughter from the babysitter. Since the mom worked shifts, it was the small hours of the morning when she arrived, and Arya seemed to be sleeping as the babysitter carried her to the car.

Screaming at the babysitter

Sierra initially joked as she asked if Arya was breathing, but then instantly fell into a fit of panic when she placed her hand on Arya’s chest and felt no movement.

With her heart in her mouth, she rushed back into the house to begin CPR. Simultaneously calling an ambulance, it was all she could do to keep trying to revive her little girl. As she explains, they were minutes she will never forget.

“In my head I knew I needed to remain calm but I couldn’t, I was yelling at my babysitter and trying to think about doing chest compressions and breathing and freaking out the entire time,” she continues.

“For the next hour while they tried desperately to bring me back my baby I called my parents and her dad, I paced, I cried, I prayed. At times I felt like an outsider watching this awful event unfold,” she says.

“I had always had these nightmares but it was never supposed to happen, not to me. It was the most surreal moments in my life.”

Eventually, Arya was rushed to hospital in an ambulance, with Sierra tailing in her own car. It was there that she received the news no mother should ever hear.

“We did everything we could,” they told her, “but unfortunately we were unable to revive her and she did not survive.”

Sierra was taken to see her daughter’s lifeless body. Arya looked so small on the big hospital bed, and her mom could do nothing but cuddle up to her as the warmth left.

At that point it was still unclear what had killed the three-year-old, with both the doctors and Sierra left to ponder over the question. What had happened?

Then, after running tests, doctors finally discovered the unlikely cause: Arya had been living with undiagnosed Type 1 diabetes.

As per her post, detecting diabetes in young children can be very difficult. Commonly, neither parents nor doctors are able to see the symptoms in time.

The classic signs that a child is suffering from Type 1 diabetes are fatigue, excessive thirst, urinating more than usual and weight loss.

Of course, it’s not always easy to spot these things in context. In Arya’s case, her parents had no reason to suspect something was amiss in their little girl’s body.

Now, Sierra is aiming to warn others regarding the consequences of undiscovered Type 1 diabetes. She’s appealing to all parents.

“So I beg you to ask your child’s doctor to test for it,” she writes.

“I beg you to become aware of the signs and symptoms of childhood Diabetes.”

Other symptoms of Type 1 diabetes include:

When diagnosed, Type 1 diabetes can be managed effectively with insulin injections. Contact a healthcare center or hospital if you believe your child may have diabetes.

I’m asking you to please share this post with all of your friends and family. No parent should ever have to be told their little girl/boy has died.

Sadly, little Arya’s life couldn’t be saved, but that doesn’t mean her death has to be in vain.

By spreading this message, we can potentially save more lives by teaching parents to be aware of the symptoms of Type 1 diabetes when they present themselves.