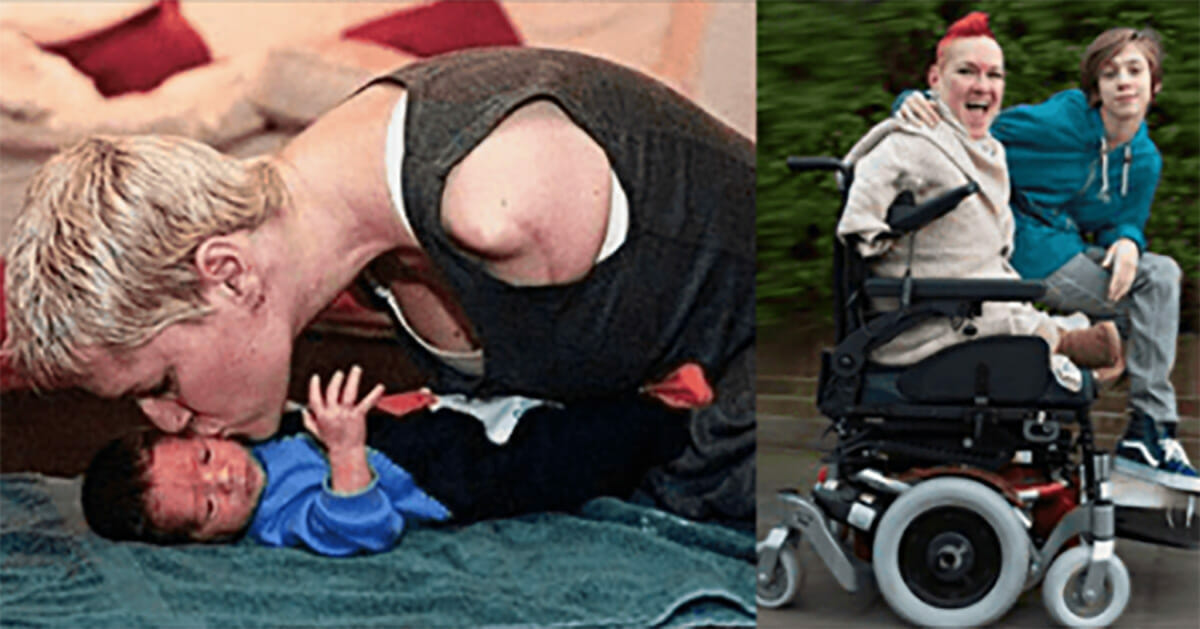 The 19-year-old son of award-winning artist Alison Lapper has been found dead.

Alison Lapper, who was born without arms and shortened legs and posed for one of the most famous statues in London’s Trafalgar Square, said her son was truly “my greatest piece of artwork and creation.”

Her son Parys, who Alison raised alone and all while pursuing her career as an artist, was just 19 years old when he was found dead in in a hotel in Worthing, West Sussex, England.

He died from a suspected accidental drug overdose, according to The Guardian.

Parys suffered from anxiety and depression as a result of being bullied at school, according to the British newspaper.

This story is a reminder to us all that the world needs more kindness and understanding.

In an extract from Alison’s book “My Life in My Hands”, published in The Guardian newspaper she talks about the euphoria she felt when her son was born.

She had miscarried several times and had given up hope but then fell pregnant with Parys in 1999.

“When my baby boy was born I was euphoric. He was healthy, he was cute, he was a blessed miracle.”

At the time Alison wrote the piece Parys was 5 years old and she describes the anxiousness she feels at the thought he may be treated differently because of her disability.

“My disability hasn’t ever created a barrier between us, but if the children at school tease him or make negative comments about his mother he may find it hard to deal with.

A consequence of what he had been through

“It makes me nervous at times, but I know we’ll get through it and come out smiling. We always have.”

But unfortunately, that did happen, and Parys started taking drugs as a result of his battle with depression and anxiety.

“I don’t want my son to be remembered as a junkie, as just another drug’s death,’” Alison said, according to The Sunday Times.

“The drugs were a consequence of what he had been through.”

According to the article he had to be taken into care when he was 16 because his struggle with mental health issues and drug taking were making it to difficult for Alison to take care of him.

Parys was anxious about the reaction from other kids at school when they saw his mom and at 13 years old asked her to stop attending school for parent consultations.

The British artist said when they had arrived at school and the kids saw them both, “the next day Parys would go in and they would rip pieces out of him.”

Alison was abandoned by her own family when she was born with the condition phocomelia.

One doctor told her mother “it would be best if I were looked after by the state and that she should put me out of her mind.”

Me in front of big me!

Despite being abandoned and raised in institutions where some staff were kind and some were cruel, Alison pursued a career in art, receiving a first-class honors degree in f;ine art at Brighton University and an MBE from the Queen for services to art in 2003.

She bought a house by the sea and raised her son as a single mom. She was even awarded an honorary doctorate at Brighton in 2014.

Alison posed for Marc Quinn’s famous fourth plinth Trafalgar Square sculpture in 2005 when she was eight months pregnant with Parry.

Parys’ life was documented in the BBC documentary series “Child of Our Time”, which followed the lives of 25 youngsters until they reached their 20th birthdays, to increase understanding of childhood development.

But sadly, Parys did not make it to his 20th birthday.

RIP My Beautiful Boy. It's been an honour to be your Mum. Love always, Mudder ?

Please share to pay tribute to Parys and all the other young people who are struggling with mental health issues.

We need to send strength and love to his brave mom who did all she could to protect her son and raise him to be the sensitive and beautiful soul that he was.