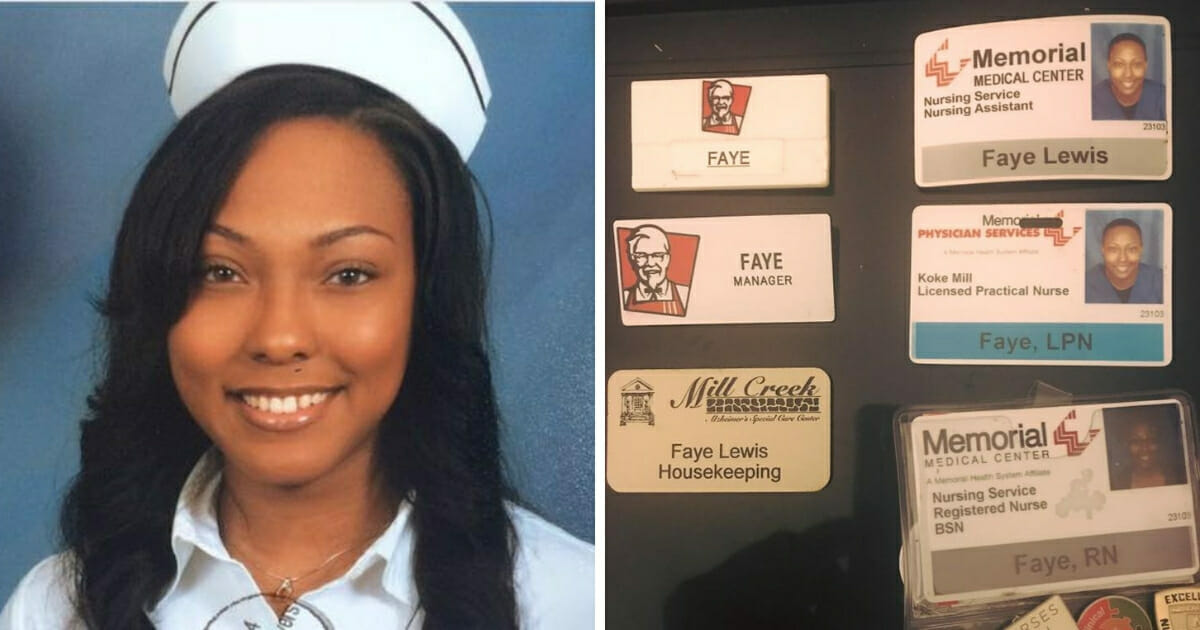 From a very early age, Faye Lewis knew she wanted to become a nurse. Raised in a church-going family, she always aimed to follow in her mother’s footsteps, and has since experienced success and huge loss in equal measures.

In the beginning, things were promising. She received almost a dozen academic scholarships, and was overachieving in all her courses.

That all changed by the end of her first year, however, when she’d been handed two B’s that denied her from nursing school, and found herself pregnant …

When she discovered she had a baby on the way, Faye was confronted with a tough decision: Retake her classes? Or opt for a less conventional route so she could spend more time with her son?

Speaking to Nurse.org: “I probably wouldn’t have chosen this journey. But, it’s my journey, I own it. I embrace it.

“My family really supported me and helped me make it possible. When I had him, it gave me even more strength to pursue my dreams so he can do the same.”

At the same time, Faye was working at KFC to supplement her income. By 2010, she’d completed her Certified Nurse Assistant (CNA) training. Within 9 months, she’d become a Licensed Practical Nurse.

Simultaneously holding down jobs with KFC and as an LPN, Faye decided to continue her education so that she could become a registered nurse. Only a week into doing so, however, tragedy reared its head.

Her father, three cousins, and dog, had died in a house fire. Her mom managed to survive, but a large portion of her family had been taken away in an instant.

“One of my best friends called me hysterically crying,” Lewis said.

“When I heard the news, I dropped to my knees. My mom made it out alive just by a miracle of God.

“My faith and relationship with God helped me get through that dark time. I prayed a lot and asked God to guide me. I had a supportive family and I knew my Dad wouldn’t want me to quit.”

Faye showed immeasurable determination in pushing on. She was able to attain her Associate’s in Nursing in 2014, followed by a BA in 2016. The only thing left for her was to pursue a Doctorate.

“Over the years I’ve often called my mom, upset, saying things like I can’t do this or, I’m just done,” she explained. “But, my Mom always encourages me and says, keep going, you’ve always made it work.”

It was then that she took a photo that’s since gone viral:

“I found a plastic baggie full of my old badges and noticed that my new badge now listed my BSN so, I snapped the photo – to encourage myself,” Faye said.

“I had been through a lot, and I knew I could do this too. I didn’t post it for attention. I just wanted to have this photo to motivate me through my Doctorate program.”

Speaking on the popularity of her photos, she said: “I didn’t know such a simple post would inspire so many,” Lewis said. “People are telling me that the post gives them hope. I owe that to God.”

If nothing else, Faye’s post has certainly been a source of inspiration for many. She’s proof that good things come of working hard and steering a course through adversity no matter what. We think her’s is a post everyone on Facebook should see!

If you agree, help us get her post, and her story, out there by sharing this article.