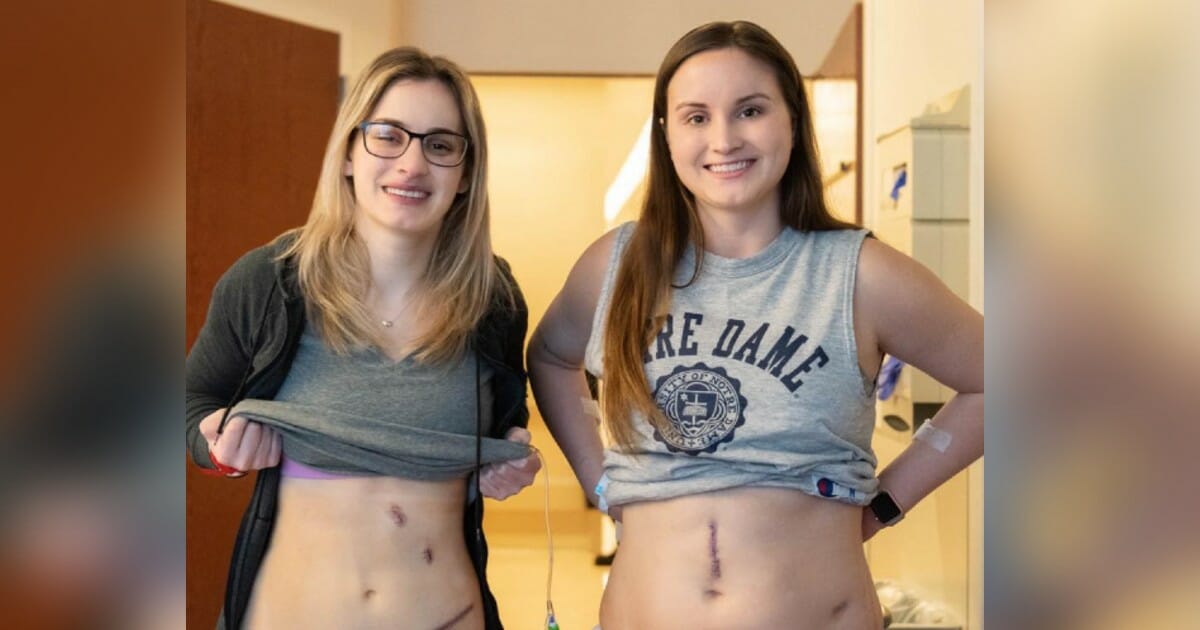 What’s the best gift you’ve ever given someone?

One of their favorite books? Perhaps a once in a lifetime vacation? Or maybe something as simple as a nice home-cooked meal?

Bethany Goralski and her sister Hannah, gave two strangers possibly the best gift anyone could ever ask for: the gift of life.

Growing up, Bethany remembered her father, Mark Goralski, always going in and out of the hospital for one of his many health issues.

“That’s what a combination of Crohn’s, an inflammatory bowel disease, and nephropathy, kidney disease, will do to you. Still, he had time to be a wonderful parent,” she shared with Love What Matters.

In 2010, the family learned their father needed a kidney transplant. After a year, Bethany’s 19-year-old brother, Josh, volunteered.

The kidney transplant was a success.

But just a few years later, Mark needed another transplant.

“In 2015, we were told, ‘He’s going to need a second kidney transplant in the next few years.'” Bethany wrote.

Eventually Bethany decided to get tested to see if she’d be able to donate her kidney to her father. Unfortunately, by the time she got approved her father was too sick for surgery.

In September 2018, Mark entered the hospital, the medical intensive care unit – the same unit his daughter worked as a nurse, and the Goralskis were told to prepare for the worst.

“I don’t see him ever leaving the hospital unless it’s on hospice,” Bethany remembered the doctors telling her family.

Four days after he entered the hospital in 2018, Mark passed away.

The Goralskis brought Mark home and made him comfortable. Four days later, he passed away.

A month later the sisters contacted the transplant department at Northwestern Memorial Hospital, where their father received care and began the necessary work to become living donors.

“My dad was always giving, he was always helping others, and I thought what a great way to honor him.” she said. “Knowing a lot of people who have been affected by organ transplant, it felt selfish to keep my kidney.”

In March 2019, the sisters donated their kidneys.

Eight years ago, Hannah and I walked into this hospital for the first time when surgeons successfully transplanted…

In the middle of March, both sisters underwent surgery, one day apart, and gave complete strangers the best gift ever, the gift of life.

It’s something they believe their father would have wanted them to do.

“I know he would be proud,” Hannah said.

“I know some people think we are crazy for having surgery for a complete stranger, but it’s the best decision I’ve ever made,” Bethany said. “Not only have we saved someone from going through what my father went through, but when I look down at my scars, I feel him nearby. This is for you, dad.”

These two sisters honored their father with such a selfless act.

If you would like to become a living donor you can find more information here.