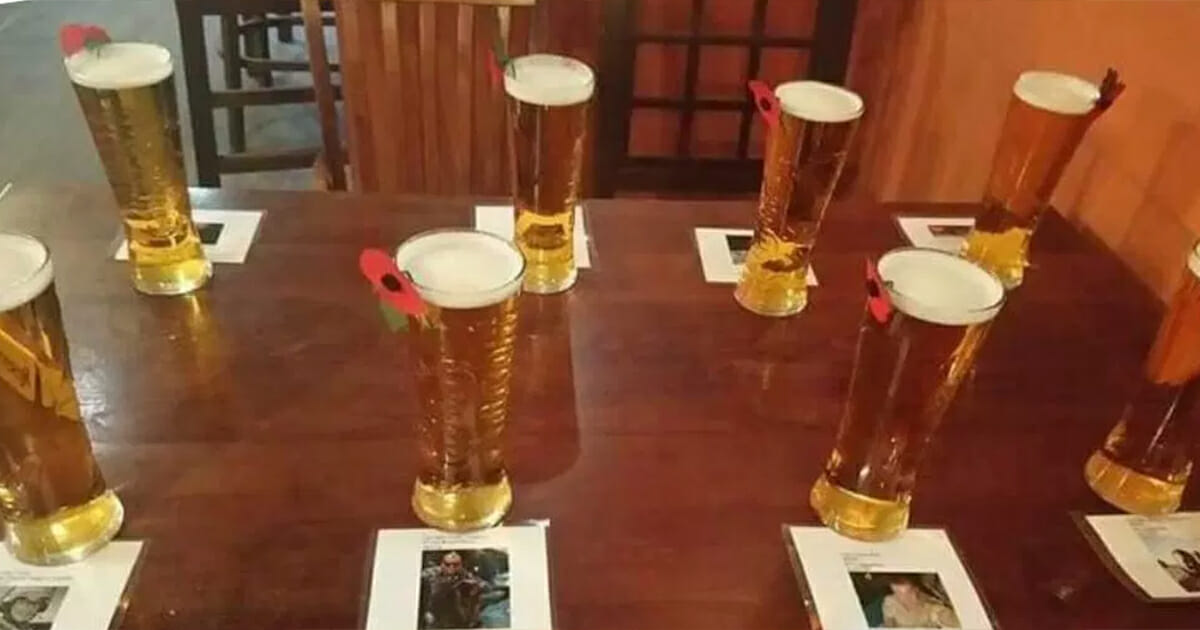 With the marking of 100 years having passed since the end of World War I, now is a time for reflection on all that soldiers sacrifice for their country.

But then, there’s never a time not to reflect on that. The men and women who risk their very lives to serve in protection of the masses command our utmost respect, and so it’s with a warm heart that I write stories such as this one.

It comes courtesy of an image posted to Facebook, wherein there’s evidence of a soldier having walked into a bar and bought a pint of beer for each of his comrades that fell during the conflict in Afghanistan …

As per British newspaper Metro, the picture was taken on Remembrance Sunday, with the soldier in question wanting to honor those who hadn’t made it home.

The image shows eight pints on a table, with a photo of a fallen soldier beneath each drink and a poppy straddling the top of each glass.

It’s said the soldier responsible simply walked into the bar, bought the drinks, drank his own pint and then left.

The image, meanwhile, was posted to Facebook and then retweeted by a fellow soldier. It’s since received thousands of shares, with many praising the unnamed soldier’s incredible gesture.

A soldier walks into a bar and buys 8 pints for his dead comrades in Afghanistan, drinks his pint and leaves the bar leaving photos of each mate at there glass, how incredibly moving is that, god bless them all. Taken from Facebook. pic.twitter.com/sq0LTt3fxg

A total of 456 British men and women were killed during the conflict in Afghanistan after the start of operations in the autumn 2001.

We are proud to support our troops, and keep them in our thoughts and prayers all the time.