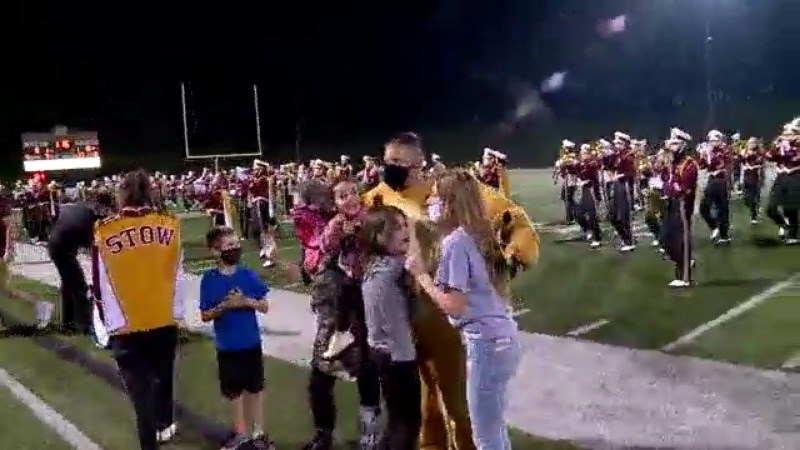 Anyone who’s ever had family serving in the military, or indeed served themselves, will know the feeling that comes with saying goodbye to a loved one knowing you won’t see them again for months.

It’s not something you get used to, nor is it something that gets easier over time. For service men and women, being away from their family is a requirement of the job, so the moment they get to be reunited is usually rather special.

It certainly was for one soldier serving in the Ohio National Guard, who was able to surprise his family after returning home from a lengthy deployment.

As per reports, the emotional reunion took place in Stow, Ohio on Friday night, at a football game between Stow-Munroe Falls and Brecksville-Broadview Heights.

Following the halftime show, Erica Jarosz, a senior percussionist in the marching band, was called to the middle of the field with her family.

They had no idea that the team’s mascot, Spike, was actually their father, Sgt. Michael Jarosz, in disguise.

Given that the Jarosz family haven’t seen Michael since March, 2019, one can imagine the flood of emotions the surprise entailed.

Wife Jennifer, meanwhile, revealed: “I kept this a secret from five kids. It took a lot of work.”

Needless to say, Erica was given a senior night to remember, and we’re sure her siblings were equally delighted to have their dad home after so long away.

So many of us forget the sacrifices men and women are forced to make in service to our country.

Stories like this simply warm my heart. I’m so glad this family has been reunited … and in the most fantastic way!

Share this article to say thank you to all of our serving men and women.