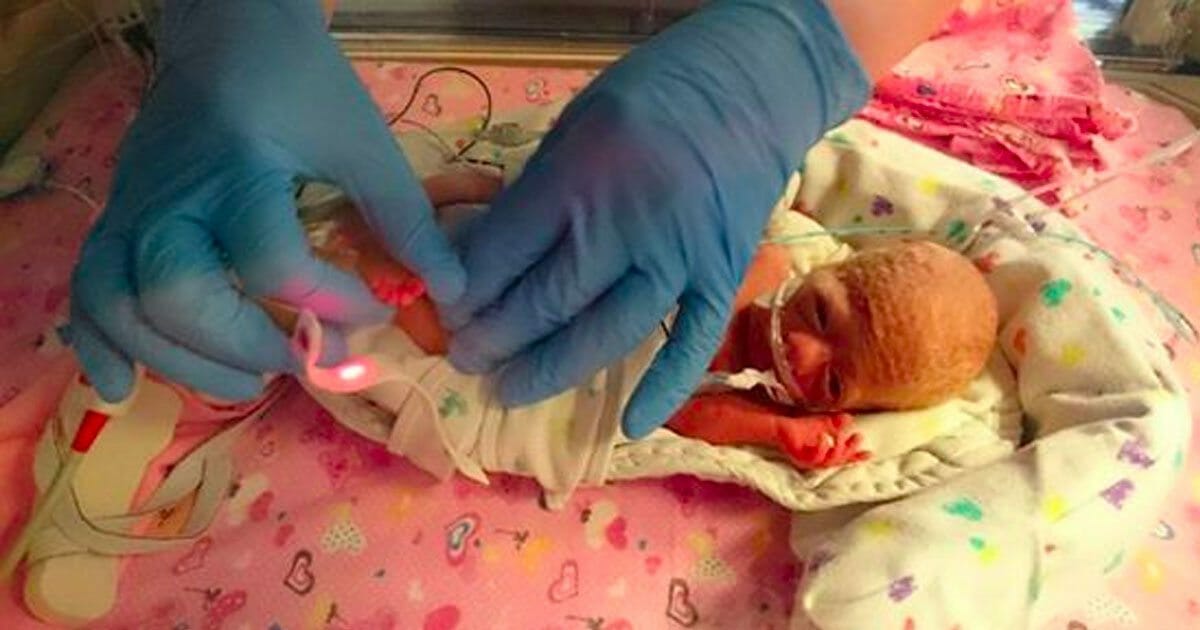 It’s a sad statistic that almost ten per cent of babies are born prematurely in the U.S.

The more premature a baby is the less chance it has of surviving, so when Sharon Grant had to have an emergency Caesarean section at 28 weeks pregnant, she was, understandably, terrified.

When her daughter Pixie was born, she weighed just 1.1 pounds and was supposed to remain lying her mother’s belly for at least another 12 weeks.

Her mom, Sharon Grant, was in just her 28th week when complications ensued involving the umbilical cord and the placenta, resulting in Pixie ceasing to grow.

Although there were three full months left of Sharon’s pregnancy, surgeons were forced to perform an emergency Caesarean section to try and save the baby’s life.

Sharon, from Plymouth, England, had to have a Caesarean section when doctors realized her baby had stopped developing.

Their only option was to remove the baby as she wasn’t getting the vital nutrients she needed to grow and thrive.

When doctors had completed the very risky operation, even they were surprised at how small her baby girl was.

Doctors were sceptical about Pixie surviving for more than an hour.

She was rushed to intensive care, where doctors did all they could to keep her alive. She was no bigger than her mother’s hand, weighed less than a bag of sugar, and was very, very delicate.

The doctors had no equipment small enough to keep Pixie warm – until one of them had a brainwave.

One doctor came up with an unconventional idea. He asked the nurse to get him a box of sandwich bags from the store.

Although the concept was rather odd, no one else had a better suggestion as to how to ensure the little girl maintained the correct temperature.

Pixie was placed into a small, sealable plastic bag from a supermarket and then rushed to the neonatal intensive care department.

This method may sound strange – possibly even dangerous – but it’s actually been used before.

Posted by Liskeardprayers on Thursday, 5 November 2015

According to the New York Times, the skin of such prematurely born babies releases fluid too fast. Storing them in a plastic bag or wrapping them in foil can actually warm them better than a regular blanket.

One of the doctors at the hospital confirmed that it’s not uncommon to place premature babies in plastic bags if they’re having difficulty regulating their temperature.

As per the Telegraph, Sharon said: “It was so random that they had her in the Tesco bag – it must have just been what the operating theatre had at the time.”

Sharon was obviously worried over her newborn daughter, but also hopeful in the knowledge that the doctors working on her were highly skilled.

For 18 long days, she couldn’t hold her daughter because doing so could cause her to lose even more weight. For Pixie, that could have cost her her life.

What a little miracle! Premature baby Pixie was born three months early and was so tiny when she was born doctors put…

She’s highly sensitive to infections and at the moment is unable to be around other children or sick people, but she’s alive.

When Pixie was two years old, Sharon said: ”She’s so happy and confident and she understands things so well. She’s proved so many doctors wrong. They see her now, and they can’t believe it.”

Fortunately, Pixie kept on growing and she is now a healthy young girl – and she is doing well!

The only thing that sets her apart from her peers is that she’s slightly smaller. Just look at her and her mom Sharon today – wonderful to see!

What a great example of the best idea not always being the most fancy one.

Doctors were able to contribute to the saving of little Pixie’s life with just a plastic bag from the supermarket. Remarkable.

Share this story to pay tribute to all the amazing doctors who worked on Pixie, and the nurses and doctors who continue to serve tremendously every day.