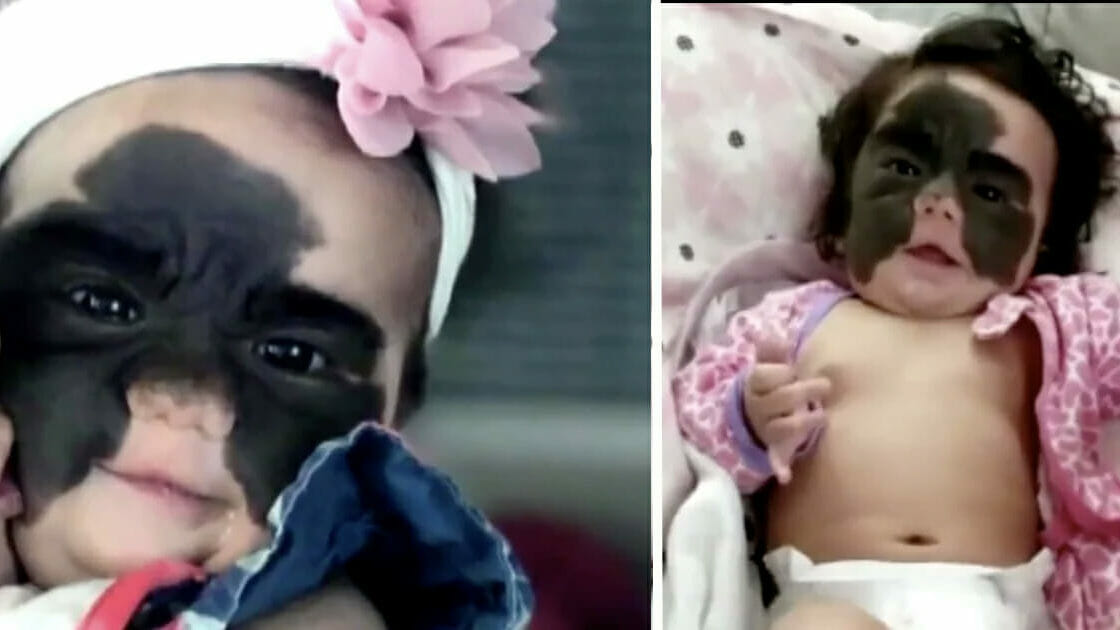 Luna Fenner is mostly just like any other 6-month-old.

She’s a happy-go-lucky girl who loves laughing, eating and bouncing around, but unfortunately this little girl was born with a very rare skin condition called congenital melanocytic nevus.

It’s characterized by an abnormally dark skin patch composed of pigment-producing cells called melanocytes and it increases the risk of developing a cancerous melanoma.

When Luna was born in March, her parents and the doctors could see that the baby had a dark patch on her face, shaped like a Batman mask. Mom Carol Fenner was “shocked” when she gave birth to Luna and saw the dark patch covering a large portion of the little girl’s face, she told WPLG.

Her last ultrasound before the birth had revealed nothing abnormal. Also, doctors weren’t even sure what the dark patch was until four days after Luna was born.

Carol says she wants to remove the ”Batman mask” – but at least six surgeries will be needed. Each surgery will cost around $40,000, according to the family.

“We’re going to remove it. That can turn to cancer, also because of the bullying and stuff we are going through when we go out, people saying bad things about it,” Fenner told InsideEdition.com.

The mom has been searching high and low for treatment and, naturally, it’s not been an easy time for the family.

Carol hopes that she can get the surgery done before Luna starts school, in order to avoid the possibility of her daughter being bullied.

“There are a lot of racist comments. A lot of people get so angry. I don’t want her to get bullied. People ask if it’s contagious and say really mean things. One time we were at church, and a girl sitting next to us said to her mother, ‘Wow, look at her. What a monster,” Carol told news agency SWNS.

After hearing about the sad situation, surgeon-oncologist Dr. Pavel Borisovich Popov from Russia contacted the desperate family and offered to perform a treatment – a treatment not available in the United States.

According to Inside Edition, Fenner and Luna are travelling to Russia to run tests before any treatment begins.

“Everybody thinks I’m crazy to go to Russia, but I have done a lot of research and gained advice from several doctors and I really think that this is the best option for Luna right now,” Carol told SWNS.

“We went to a lot of doctors before here in the U.S. We went to Chicago, Boston, New York, and I didn’t like the results and the doctors in Russia have shown me very good results like the before and after pictures, so we’re gonna try it,” Fenner told InsideEdition.com.

”Great progress is being made by the donations and support I’ve received so far. I’m beyond grateful for everyone that has supported my cause. But it’s still a long road to get to the money for the first surgery,” Luna “says” according to her fundraiser.

With that smile, I don’t see anything else but a beautiful and normal baby. She’s so pretty, God bless her heart! ♥️

Praying the surgery goes well and that she will have a good results.

God Bless and Good Luck with your journey Luna – please share this article on Facebook if you also wants to send your support!