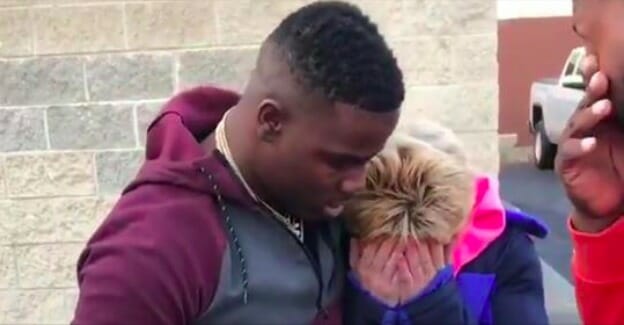 You can never quite tell who needs help the most. Some people remain secretive about a desperate life situation, uncomfortable with receiving handouts.

But sometimes, help simply is needed and it’s up to everyone to keep an eye out. You never quite know who and how badly one might be struggling.

A group of young men recently proved that by keeping an eye out and acting on their compassion, you can truly touch a life.

It began when Carlos “HaHa” Davis and some of his friends pulled up to a gas station one day. They overheard a woman nearby paying her gas money with coins.

This immediately caught their attention — and their hearts were caught by the woman’s saddening situation. They knew something had to be terribly wrong in her life and they decided they just had to do something to help. Anything.

They promptly approached the woman — and that’s when Davis handed her some wads of cash.

The woman is taken aback and completely overwhelmed by the sudden and unexpected act of generosity.

“My husband just died a week ago,” she says, in a video captured of the incident and later posted on Twitter. “We weren’t like this before. I didn’t ask nobody for nothing. I didn’t… I didn’t even ask you…”

To that, Carlos simply responds: “You’re okay. We got love for you. This is for you.”

His companion can’t hold back the tears at the woman’s tells her story. It’s clear that it’s an emotional moment for them all.

“I guess He does look down…” the woman says through tears, referencing God.

The young men agree whole-heartedly and urge her to accept their gift — and simply pay it forward when she can.

Watch the moving incident in the video below.

This week on “I love you” saw a ladies put pennies in her gas stank. I love you pic.twitter.com/Sikekr10cf

What a wonderful gesture! These young men could have simply done nothing and driven off, but their hearts opened up to a complete stranger. Share to celebrate their compassion and if you agree we need more people like these young men out there!