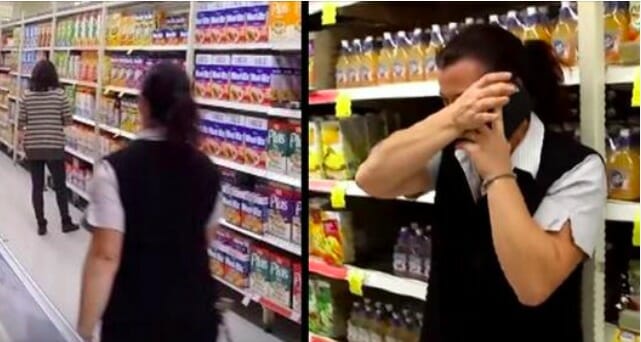 There’s nothing quite like the bond shared between a mother and daughter. While this brings immeasurable joy to every pair’s heart, it often also bring immense sadness if the two are torn apart.

Mother of four Tina from Sydney, Australia, loves her children with all her heart. She works hard day in and day out to support them. So when he daughter Donna moved to the US, things certainly felt emptier at home and in her life.

The hard-working mom missed her daughter terribly. But on one mother’s day, things would take a surprise spin that made her cry with joy.

Tina is as hard-working as it gets. The mother of four takes night shifts at a grocery store to make sure she can make ends meet.

It was difficult for the devoted mother to imagine what life would be like without any of her children. When her daughter Donna announced she had decided to move to the US, Tina was excited for her but also couldn’t imagine how she would cope with her daughter so far away from home.

Life moved on and an entire year went by. Of course, both Tina and Donna missed one another terribly.

When mother’s day came around, daughter Donna had an idea. She phoned up a local radio station, KIIS 1065, and told them their story.

Touched by the strong love Donna had for her mom, the radio station decided to do something very special for the family as part of its ‘Surprise Givebacks program.

The promptly flew Donna in from the US and came up with a simple scenario for the amazing surprise. Donna would go to the supermarket where her mom worked one evening — but, naturally, no one would tell mom.

Donna stood in an aisle, barely able to contain her excitement. The store intercom then came on and mother Tina is bid to ‘aisle 6’ where ‘ a ‘customer is in need of assistance’.

Watch watch happens when Tina realizes that ‘customer’ is none else but her beloved daughter Tina. Her reaction immediately brought me to tears!

What a simply wonderful and moving surprise. This made me want to reach out to my mom instantly. Share Tina and Donna’s story if it this mother/daughter bond touched you, too! Daughters need their mothers, and mothers need their daughters.