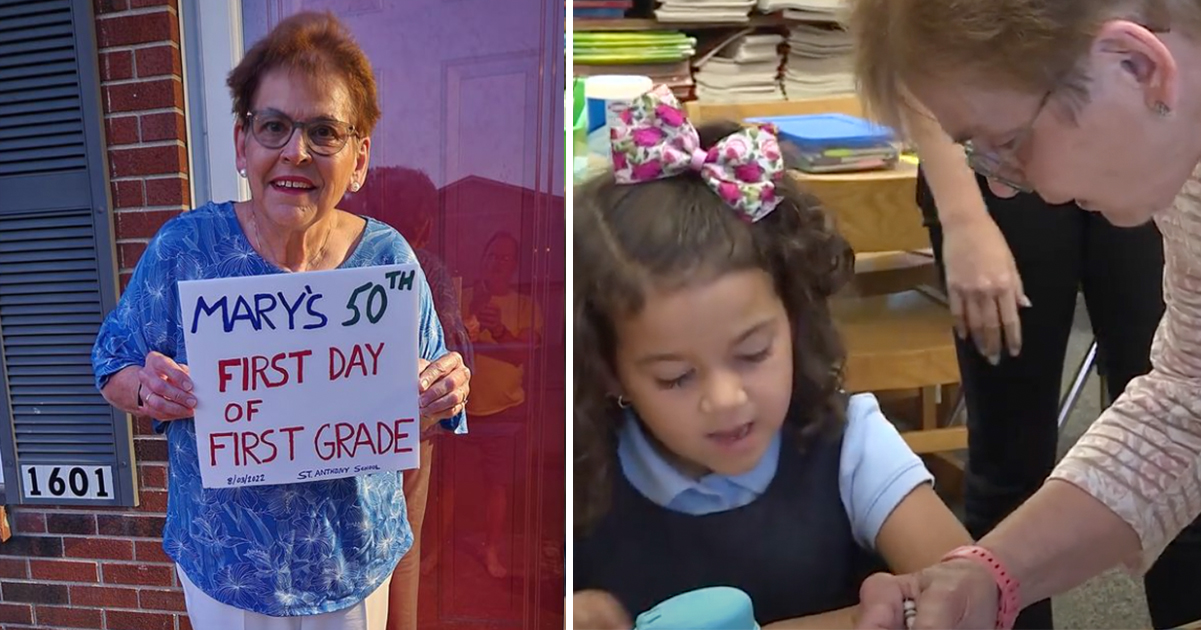 If you ask me, the great teachers of our nation don’t get half the respect they deserve.

Now, teaching isn’t a glamorous profession by any means. The salaries aren’t fantastic; teachers aren’t lauded on TV screens or mobbed by adoring fans wherever they go. In truth, the job is a hard one, often thankless, performed by individuals who have it in their hearts to do some good in the world.

Still, teachers are charged withe educating future generations, arguably one of the most important roles any society has. More often than not, their kind are patient, compassionate, and determined to make the best of the children in their care.

The Clarksville, Indiana native is reportedly celebrating a gigantic milestone this year, ringing in her 50th(!) first day of first grade.

That’s right, Mary, a mother of six, has been teaching for her entire professional life. Last week, her husband Greg posted a photo to social media to mark his wife’s 50th consecutive year of teaching first graders.

In the photo, Mary can be seen standing on her front porch, holding a sign that reads: “Mary’s 50th first day of First Grade.”

Needless to say, the post proved to be a massive hit.

As per 11Alive, Mary grew up down the street from St. Anthony Catholic School. She herself attended the school as a young girl and has taught there ever since.

“I graduated from this school. I came here in the first grade because kindergarten hadn’t been invented yet,” Pickerrell explained.

“I always wanted to be a teacher and I just love the little ones.”

Mary began her career as a first-grade teacher half a century ago. Since then, she’s seen and done it all.

“My oldest from the first class I had, is 56 years old! I said, they’re going to retire before me! Because I have no intention to retire as long as I stay healthy, and God has blessed me with health. I take a calcium pill every day, that’s it,” Pickerrell said.

Naturally, Mary’s seen some changes since she first started in the classroom back in 1972.

“Only blackboards and chalk, and they had to go outside every day and beat the erasers together to clean them,” she said.

“Now, they have Chrome books. I never thought I’d see that day. We had whiteboards, then smart boards, and then these wonderful things, whatever they’re called. And I had to learn all this stuff because it’s hard for me. Because I like chalk and erasers!”

What’s more, the veteran teacher is still every bit in love with the profession as when she started.

“They’re all lovable and I’ve never met a child I don’t love,” she said.

What an inspirational figure Mary is! I can’t imagine working the same job for 50 years, let alone in the sort of high-pressure environment being a teacher entails.