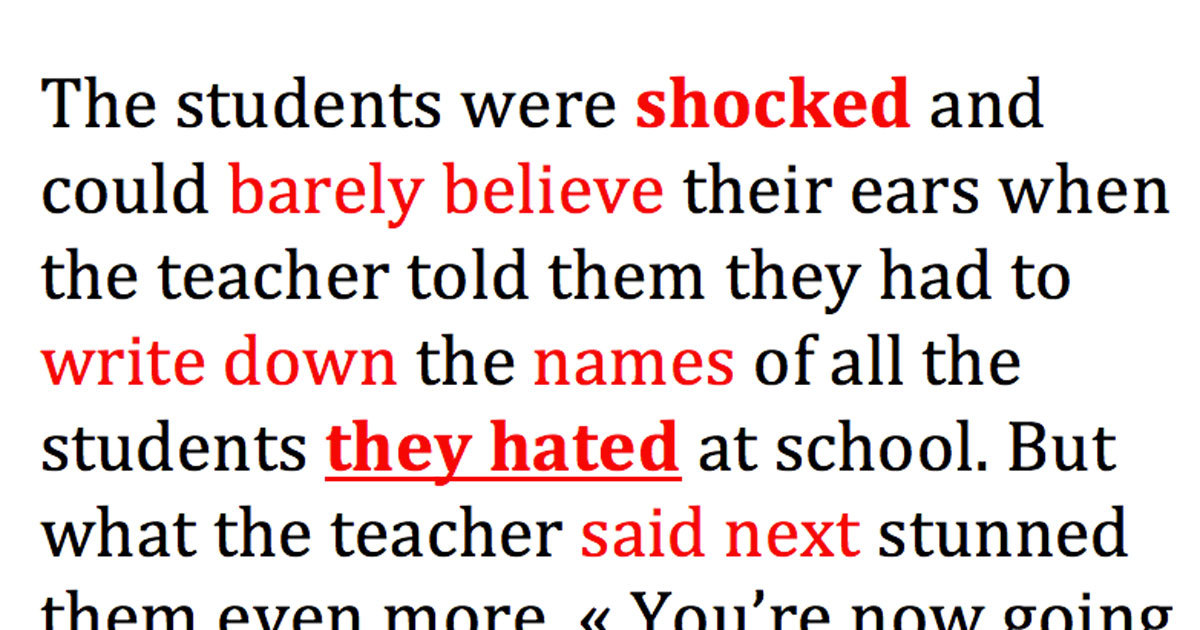 School is not just about learning to read, write and count. Other valuable lessons can be learned, such as respect and good treatment of others.

Unfortunately, bullying remains a pervasive issue across countless schools. But we must never accept that. Through awareness and education, we can give students something to think about.

This is exactly what the teacher in this fictional story decided to do one day.

She instructed her students to carry out a simple exercise that initially sounded crazy.

The kids were told to write down the names of classmates that they hated, but nobody expected what the teacher would do next…

All I can say is, what an important message and clever way to deliver it!

A teacher asked her students to bring some tomatoes in a plastic bag to school. Each tomato was to be given the name of a person whom that child hates. So, the number of tomatoes would be equal to the number of persons they hate.

On a pre-determined day, the children brought their tomatoes well addressed. Some had two, some had three and some had five, some even had 20 tomatoes in accordance with the number of people they hated.

The teacher then told them they had to carry the tomatoes with them everywhere they go for two weeks. As the days passed the children started to complain about the decay and smell of the tomatoes. The students who had many tomatoes complained it was very heavy to carry and the smell was too much.

After a week, the teacher asked the students “How did you feel this week?”

The children complained of the awful smell and heavy weight of the tomatoes, especially those who carried several tomatoes.

The teacher said, “This is very similar to what you carry in your heart when you don’t like some people. Hatred makes the heart unhealthy and you carry that hatred everywhere. If you can’t bear the smell of spoilt tomatoes for a week, imagine the impact of bitterness on your heart as you carry it daily.”

The heart is a beautiful garden that needs regular cleaning of unwanted weeds. Forgive those who have angered you. This makes room for storing good things.

Get Better, Not Bitter!

Please share if you agree with the message in this story!