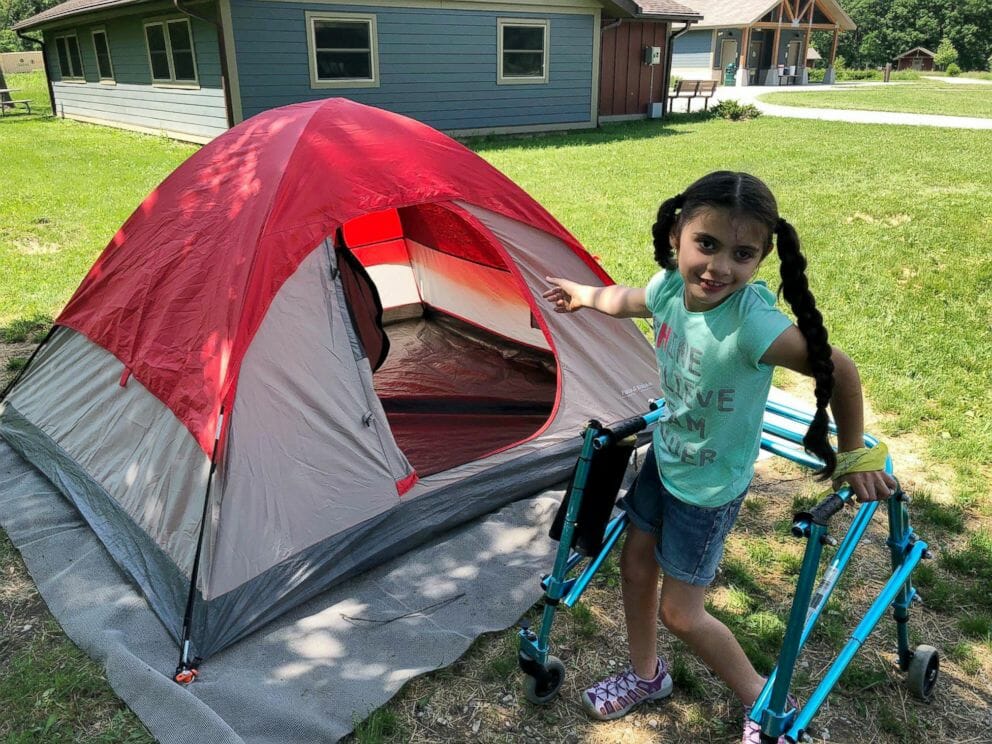 Just ask Maggie Vazquez, a 10-year-old who has cerebral palsy. She requires a walker to help her get around and, though she loves the outdoors, it can sometimes be difficult for her to do the things she wants to do.

Unfortunately, that promised to be the case when her class was planning to go on an overnight camping trip. Maggie’s walker wouldn’t work in the woods and so she feared being left behind at home while her classmates had fun.

Luckily for her, her teacher, Helma Wardenaar, wasn’t about to let that happen. As per ABC, Wardenaar was adamant that Maggie would go camping too, so found a rather ingenious way of making it happen…

Maggie’s mom, Michelle, describes her daughter as being positive, funny and independent: “She has a funny and quirky sense of humor. She loves to work on fine detailed art coloring books and has started some independent drawing. She loves music. She loves being outside, but the motor challenges make it difficult.”

Given her personality, the thought of being left behind while her classmates enjoyed a camping trip was too much to bear.

Fortunately, Maggie’s teacher Helma wasn’t about to let that become a possibility. She first checked to see if traditional wheelchairs would work, but it transpired they wouldn’t be able to handle the terrain.

She then considered renting a pony for Maggie to ride on, but they’re not allowed on pedestrian paths. “I considered accepting a fine if we would be caught,” Wardenaar said, “but figured that it would set a bad example.”

Undeterred, Wardenaar contacted big brands for help with her predicament, though they failed to provide a solution. One employee, who she knew as Greg, spent an hour with her trying to find something in his store that would help, but, again, was unsuccessful.

Then, two weeks later, Greg reached out to Wardenaar to explain that he’d found a backpack called the “Free Loader”. It was a specially designed piece of equipment that would allow Wardenaar to carry Maggie on her back.

10-year-old Maggie has cerebral palsy and uses a walker, so when her class hike was being planned, she feared missing out. But her teacher found a way to bring her along for the adventure.

At $300 it was hardly cheap, and it didn’t provide Maggie with any sort of great comfort, but she enjoyed her trip all the same.

“We saw deer footprints, butterflies, birds, etc. Maggie sang along while I hiked. She wrote an original song about the camp and how much fun the time together is,” said Wardenaar.

Obviously, Maggie’s mom is incredibly appreciative of Wardenaar and her efforts. “Ms. Helma really took this on personally and spent a lot of time tracking down this piece of equipment for Maggie,” she said.

What an inspiring story. It’s great to see a teacher with such pure devotion to her students – Helma really went above and beyond to ensure Maggie could be just like the other children in her class.

SHARE this story to help us pay tribute to Ms. Wardenaar and her efforts. It’s the least we can do!