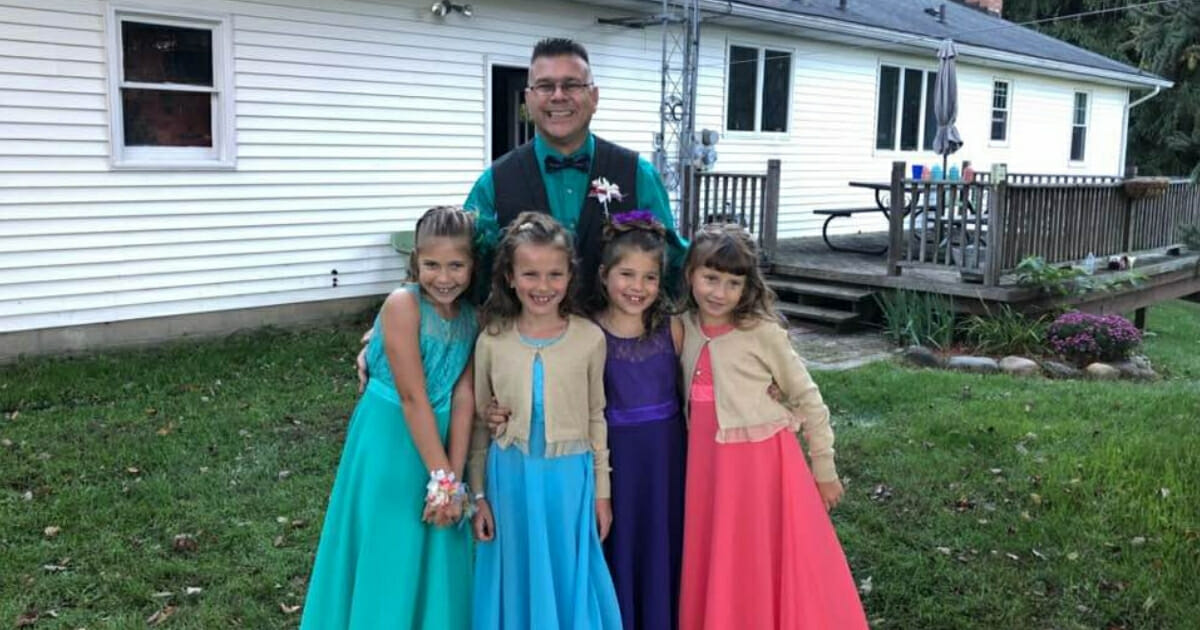 In a child’s life, nothing hits so hard as the loss of a parent.

Luke Reece, father of five, of Davison, Michigan, was admitted to hospital in early September. However, his health soon took a turn for the worst and he passed away on September 19 from complications relating to blood clots.

A fundraiser was held at a local restaurant, and a GoFundMe page was set up to provide support for the family he left behind. Only, sometimes the best sort of aid doesn’t come in the form of finances, but rather the compassion in one’s heart …

Steven Culbert, a former teacher of two of Luke’s young daughters, knew that the family had been having a hard time. He’d been a bastion of help since the first day Luke was admitted into hospital.

In fact, Mr. Culbert had visited Luke several times in a bit to show his support, with Luke’s wife, Shelley, describing him as a role model.

“He has always been a teacher and role model children could look up to, he goes above and beyond for all his students,” she said.

With Luke in the hospital, Mr. Culbert was keen to ensure Alivia and Avery (two of Luke’s daughters) didn’t miss out on the daddy-daughter dance the school was planning. He asked them if they’d like to join him and his own daughters.

Sadly, Luke passed away four weeks before the scheduled dance, but that didn’t stop Mr. Culbert from making good on his promise. On the contrary; it only meant that more people were keen to pitch in to make it a night to remember.

The friends bought Luke’s daughters new dresses, and they were all treated to a day at the salon prior to the dance.

Avery told WJRT: “It felt like as if I was a Barbie Doll.”

Before leaving for the dance, the girls took a moment to honor their father, releasing balloons with the phrase ‘#BeLikeLuke’.

The girls were also surprised with a limo to take them to the dance.

Then, after a night of dancing, laughing, and pictures that will last a lifetime, Mr. Culbert took the four girls for ice cream. It turned out the only thing they were disappointed in was Mr. Culbert’s dancing skills.

Luke’s wife, Shelley, couldn’t thank Mr. Culbert enough. She wrote: “There are not enough words to express my gratitude to this humble giving teacher and friend and everyone involved to make this a night to remember. He has wrapped his arms around my girls and made sure they know he is there for them since Lukes passing.”

What an inspiring story to grow from the ashes of despair. Steven Culbert, you surely are one hell of a good guy!

We think he deserves praise and recognition for his actions. If you do to, share this article to spread the word and show a little love!