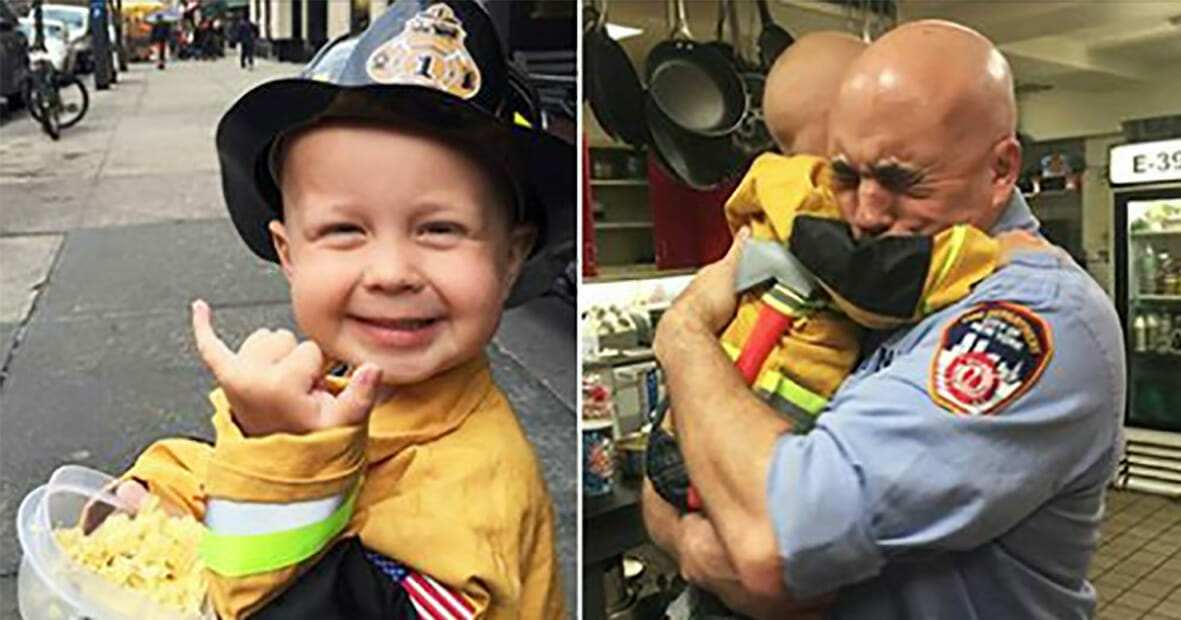 When Trucker Dukes was just a one-year-old, he was diagnosed with a stage 4 cancer known as neuroblastoma.

He bravely endured the harsh treatments for two years, fighting until his little body could fight no more.

During his short life, he touched the hearts of so many, always keeping a beautiful beaming smile on his face.

One group of people he won the hearts of in particular was the Fire Department of the City of New York (FDNY), who would form a bond with little Trucker that continues to endure even after death.

Having a dad who was a firefighter, Trucker believed he was one of them. This brave little boy was welcomed into the firefighter family with open arms.

He was even made an honorary junior firefighter by the Fire Department of New York (FDNY).

Mom Shauna took Trucker to New York City to receive treatment after he was diagnosed with his cancer, and it was there that his passion for all things firefighting would be taken up a notch.

Trucker stayed at the Ronald McDonald House in New York.

One day, after exploring the city with his mom, he returned to find NYC firefighters at the building responding to an incident.

Thankfully it was nothing serious, but as soon as Trucker saw the firefighters he simply had to go and say hello.

“I see this little boy excitedly walking towards me with his eyes aglow. I opened my arms and he basically climbed up and hugged me around the neck. It was as if we’ve been friends/brothers for years,” FDNY Captain Jim Grismer told the Huffington Post.

In May 2016, the FDNY told ABC News that Trucker had been sworn in as a FDNY Junior Firefighter on May 31, 2016. He celebrated his third birthday with a party hosted by some of the firefighters from the station.

Trucker’s dad Joshua Dukes is a firefighter in Maui, Hawaii, where the family are from, so Joshua has always had a love of all things firefighter-related.

“He actually thinks he’s a firefighter in New York. We’ve had unbelievable support from firefighters all across the world, actually,” Shauna told ABC News.

Sadly, his family, which set up the social media campaign “#TruckerToughChallenge,” eventually decided to stop the tough treatments and took him home to Maui to treat him nutritionally, The Maui News reported.

He, his three older siblings, and his parents, made the most of the time they had together, making memories including a trip to Whistler, British Columbia, where they learned how to snowboard.

Sadly, sweet little Trucker passed away at his Hawaii home on March 3, 2017, in his mother’s arms. The news was announced on Team Trucker, the Facebook page dedicated to the young boy.

“Trucker’s passing has been the hardest experience you can imagine. Now we get to celebrate his extraordinary life,” his mother Shauna said in a statement to ABC News.

SHARE if you agree that this picture melts your heart. Pictured at FDNY Engine 39/Ladder 16, Trucker Dukes and Capt. Jim…

After Trucker’s passing, the fire departments in New York City and Maui paid tribute to him by putting his name on their riding list.

Ever since Trucker’s passing, his family have been working hard to raise awareness of paediatric cancer.

“I don’t know what the future looks like for us, but I’ll never stop raising awareness. Hopefully, one day there’s something less toxic and not as harsh for someone else’s baby,” Shauna told The Maui News.

A kiss from a boy to his mommy is so lovely. A reward. This kiss is beautiful for a thousand reasons. LET'S SEND THIS…

Trucker’s father posted a picture on their Facebook page of the headstone dedicated to their precious son.

“It’s so strange because I’m somehow comforted that your headstone is installed now and honors you and your legendary life, but heartbroken because no matter how many times I visit your grave I know you’re not here with us.

“I miss you so much kiddo. It feels like I have a hole ripped in my heart,” the post read.

It makes me so angry that kids have to fight this evil disease and families have to endure such immense pain as a result.

Please share to pay tribute to Tucker’s bravery and all the other children fighting this horrific disease. Rest in peace sweet Trucker.