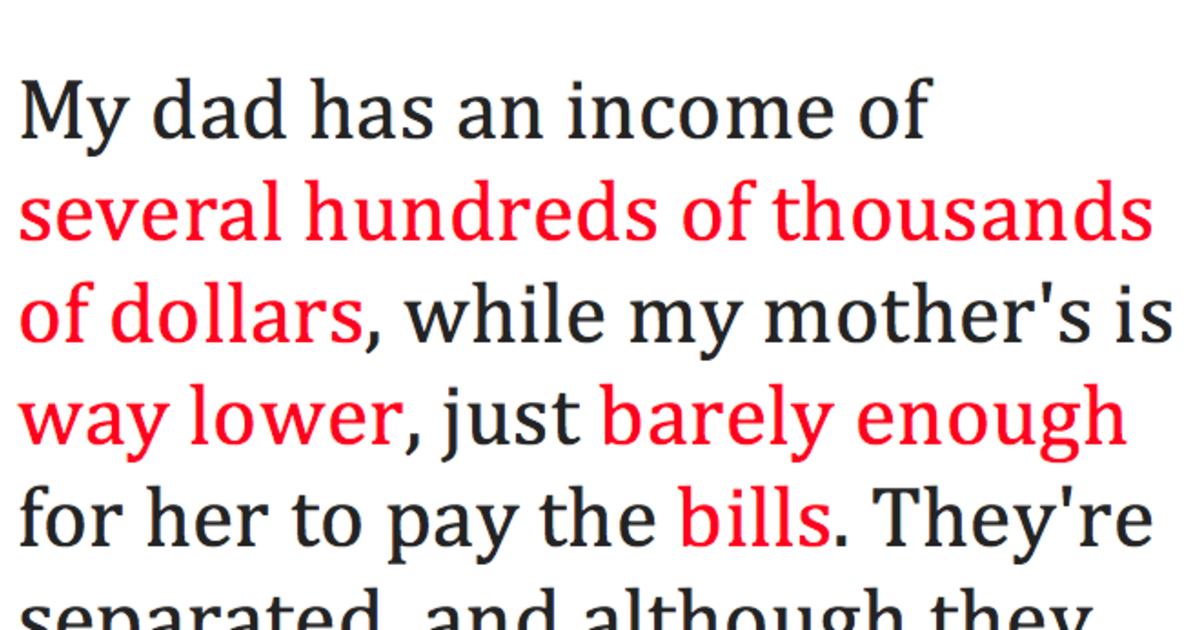 When parents separate, it’s easy for children to get caught in the middle while parents compete to be the ‘best’ parent. But such situations should never be experienced by a child. When I read this guy’s story, I was really touched — and impressed. His parents separated when he was young, and his very wealthy dad soon tried to prove that he was the “best parent” by buying him a lot of expensive gifts. But this guy is so smart, and quickly realized what really counts in life. And no, it wasn’t the gadgets or the money. I’m not sure whether any of this is real, but what the young man says at the end is so true and important, I felt I just had to share his story with you.

I come from a very diverse background. My dad has an annual income of several hundreds of thousands of dollars, while my mother’s is significantly lower, just barely enough for her to pay the bills. They’re separated, and although they have shared custody, I spend most time with my mom.

During my childhood, I was directly exposed to their different economic situations and how it affected life – both for me and for them. I was an ordinary boy who loved to play TV and computer games. My mother could only afford to buy me a used game console and game, so I chose a Nintendo and Super Mario.

I spent every other weekend with my dad. And he wanted at all costs to prove that he was the “best parent”. Therefore, he asked me for a list of all the games and stuff I wanted and whatever I had wished for would be there the next time I visited.

Although he bought me what I wanted, I never asked for excessively expensive stuff, but when I turned 17, I decided to splurge and asked for a jet ski. Sure enough, two weeks later, a USD $20,000 stood at the pier by his lakeside home.

The best thing about being rich are the conveniences and benefits that come with the lifestyle. It offers a peace of mind, which according to many, is the same as real joy.

The worst part of being rich? It doesn’t provide true joy. As I discovered, true joy comes from feeling loved. Two years ago, my mom set up an account for me, linked to her own, so I received notifications in my email every time loans or bills were due.

One day, I needed a new computer which cost close to USD $800. It was not a super computer, but it was okay and I supposed that my mother could afford it. I promised to help her take care of things around the house and to get a job in order to pay back every dime.

The next day I received two e-mails. One email said that a purchase had been made for US $1,200, and the second email revealed that my mother’s bank account had gone into overdraft after the purchase. My mother had decided to buy me a nicer computer to make me happy, even though her finances were severely strained.

I never told her that I saw those emails. Instead, I worked like crazy to pay her back, and I managed to do so in just two months.

Shortly after, my mother fell very ill and had to quit work. Even though I’m now studying at a university five hours away from home, I make the journey several times a month to help her shop, clean and maintain the garden. I pay for most expenses too.

No games, no jet skis, no boats and no high end TVs as my dad had bought me can ever outweigh the love I feel for my mother. True love can not be measured in money. Real love is when you do everything in your power for the one you love so that they feel good and have a happy life.

This guy’s words went straight to my heart. If it had the same impact on you, feel free to share his story so that more people can be inspired by his beautiful take on real love.