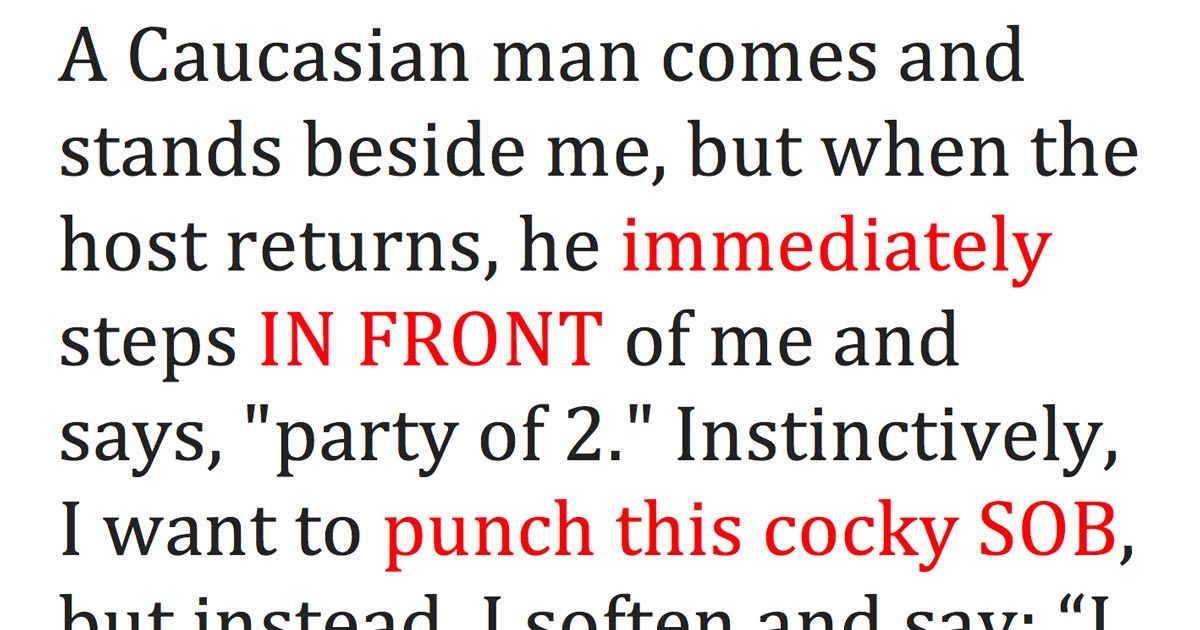 No one likes being mistreated. It’s painful, and it’s all too easy to believe the bully’s words and think there’s actually something wrong with you. But when a person has the strength to see that the fault lies not in themselves, but in the abuser, it can be an empowering moment. In this particular story, the bully is a racist and the woman is black. She doesn’t take his abuse, but at the same time, her response to him is both gentle and surprisingly powerful. I aspire to be like her some day, and in the meantime, I thought I’d share her story here in the hope it might empowering.

“So, I’m in line at a restaurant which is lengthy due to the weekend… Finally, I get to enter my name and party number, when the staff bolt in different directions to check tables… I wait patiently as I’ve already overheard wait time is 35 minutes, so not immediately entering my name isn’t gonna change anything.

A Caucasian man comes and stands beside me, and when the host comes back to the host stand and picks up his pen, the Caucasian immediately steps IN FRONT of me and says, “party of 2.”

Now I know he’s seen me standing there for about ten minutes, so I say, “Excuse, but to be fair, I’ve been here for awhile.”

He looks at me derisively and dismissively and repeats to the host, “party of 2.”

The host then says, “Sir, give me one moment, she was here first…” cuts him off and says, “Well, as a White American I don’t feel I need to acknowledge PEOPLE LIKE HER and I SHOULD come first.”

By this point all the people packed in the waiting area begin to make various comments, but it all sounds muffled to me as the blood pounding in my head drowns everything out. Instinctively I want to punch this cocky SOB…I want to kick him in the shins and explain that it’s exactly that type of thinking that has us backwards as a Nation, why though we are one of the greatest countries in the world, we still struggle to get it together. That I’m a veteran and without PEOPLE LIKE ME, his freedom to express his opinion, as misguided though it may be, would not even be possible. The host at this point looks distraught, and so I soften and say, “It’s okay party of 2 can go first. I want to allow sympathy on account of his handicap.”

More murmurs from the group.

Turns to me and clearly his patience has ran thin but then again, so has mine. His voice drips venom a he says, “I don’t have a handicap.”

To which I reply, “Make no mistake about it, sir, ignorance is a handicap, and its effect cripples us all.

Everyone started clapping, and the next group to get a table offered me their spot, but I declined, because I know what it’s like to wait my turn..I’ve waited my turn all my life, but I also know that good things come to those who wait…”

If you also found this story empowering, please share it with your friends!