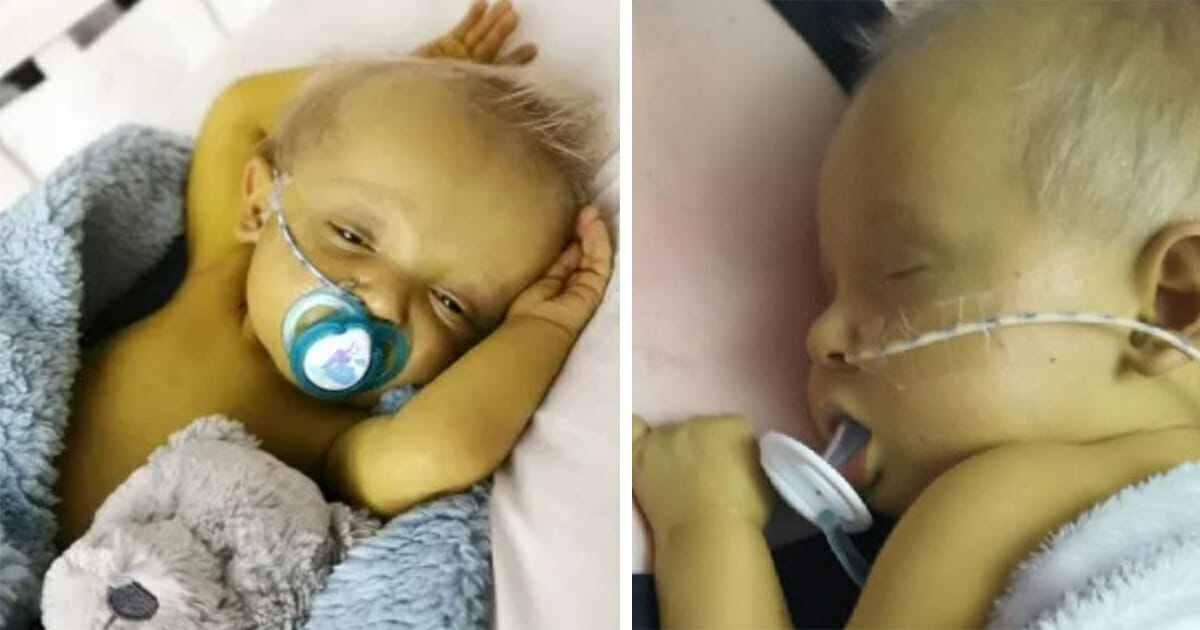 A toddler battling a genetic disorder that causes liver damage and can give his skin a yellow tinge is at the mercy of sick trolls, according to reports.

Metro say that one-year-old Logan Webb suffers from Alagille syndrome, resulting in liver damage and his body absorbing bile that it should otherwise process.

Despite his plight, parents Gemma Channing, 25, and Lloyd Webb, 27, have said they’re hesitant to take Logan out in public as a result of abuse from trolls who have compared him to a ‘Minion’.

“I always have people asking me what’s wrong with him and that I should take him to hospital because he has jaundice,” Gemma said, as per Metro.

“We get lots of people saying negative things such as asking why he looks like a Minion and that he looks like Shrek or the Grinch.

“Every time we go out as a family there’s a constant reminder about Logan’s condition. We can’t just leave the house and have a normal day out, we have to be stopped and reminded by someone about how poorly he is.”

As per reports, Logan’s condition means that his liver doesn’t function properly. Bile is absorbed into his skin instead of being processed, resulting in his skin taking on a yellow hue that can burn and itch.

What’s more, Logan is the size of a six-month-old, despite being a toddler. His condition also means his vertebra is misshapen, leaving him in constant pain and discomfort.

Gemma and Lloyd give their son ten different medications daily and are forced to spend much of their time at the hospital.

Gemma said: “He touches the heart of everyone he meets.

“He’s so happy and he’s got such a lovely, little character. He’s always shouting and giggling, he takes it all in his stride and he loves life.”

Sadly, that hasn’t stopped Logan from being the subject of mean comments.

“He’s phobic of people and that puts a lot of strain on the family,” Gemma said.

“He can be really yellow sometimes.

“When we were in Sainsbury’s with Logan doing a quick food shop and minding our own business.

“We got into the car and were about to drive off when a woman started banging on the window. Rather than asking us about Logan she had called a paramedic who happened to be in the car park to assess Logan.

“She then proceeded to tell us that we should take Logan to the hospital as he was clearly unwell. We tried to explain to her that he is being cared for and has a complex condition.

“She just stood there and said it if was her son she’d take him to hospital. The paramedic understood what we were saying but it was so embarrassing.”

Gemma and Lloyd are currently raising money through a GoFundMe campaign to pay for Logan to travel to California so he can receive the specialist treatment he needs.

The hope is that he can have open-heart surgery before going on the list for a liver transplant.

We’re wishing Logan all the very best moving forward, and are sending prayers and thoughts in his direction.

Trolls and bullies should never be allowed to exist in this world. I simply can’t understand why anyone would behave such a way toward a sick child.

Share this article if you want to wish Logan well moving forward.