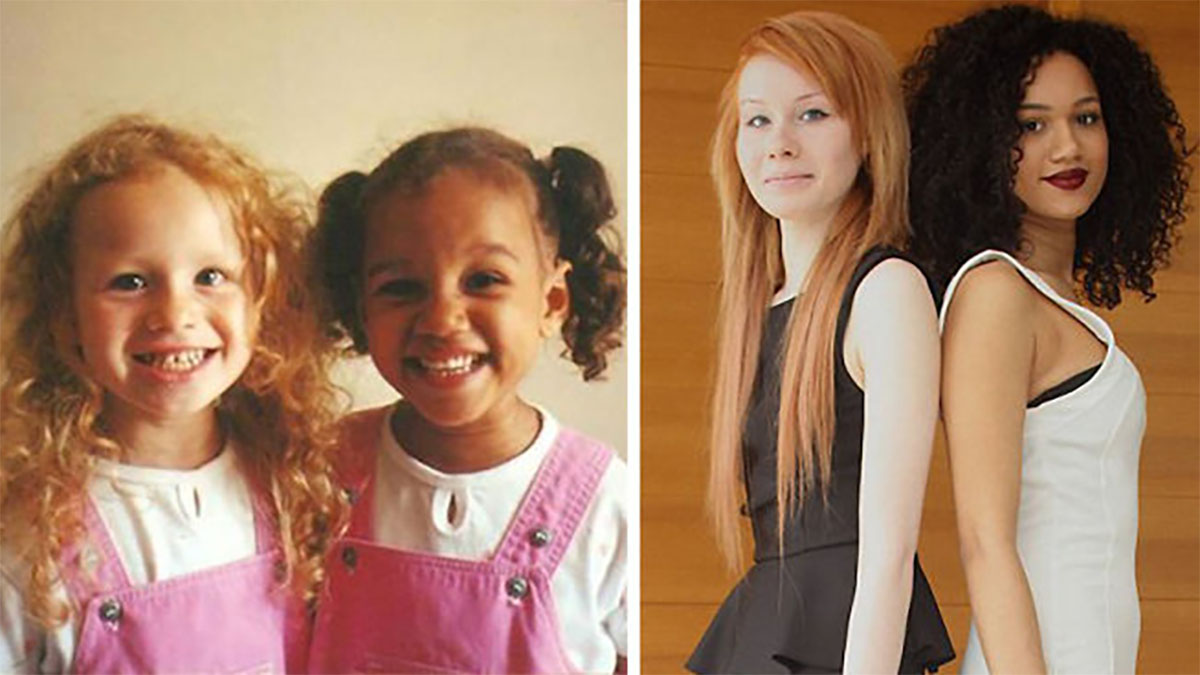 When we think of twins it’s usually the case that we struggle to tell them apart but for British sisters Lucy and Maria Aylmer this has never been the case – in fact these two have to convince people they are twins.

The now 24-year-old sisters would often have to produce their birth certificates to prove they were even sisters let alone twins.

In 1997, Donna Aylmer cried with joy when she learned she was expecting twin girls. But after the delivery, she took a serious look at her newborn twin girls.

One of them, Lucy, had red hair, blue eyes, and a pale, freckled complexion. The second one, Maria, had brown skin, brown eyes, and dark curly hair.

How could these two girls be twins?

Lucy and Maria, from Gloucester, England, were born to interracial parents and while Lucy has straight red hair, a fair skin tone, and blue eyes, her twin sister Maria has dark skin, brown eyes and curly hair.

The girls were born in January 1997 to Donna who is half Jamaican and their father Vince who is white, and together they have produced one white twin and one black twin.

Lucy said when she and her sister were first born her mom was in shock.

“So she had no idea that we were so different. When the midwife handed us both to her she was just speechless,” she said, as per the Daily Mail.

The twins have three older siblings who Lucy says have skin tones somewhere in the middle of hers and Maria’s.

“But my grandmother has a very fair English rose complexion, just like mine.” says Lucy.

She added: “No one ever believes we are twins. Even when we dress alike, we still don’t look like sisters, let alone twins. Friends have even made us produce our birth certificates to prove it.”

The entire situation puzzled mother Donna and numerous others — but the scientific explanation is quite simple.

For a biracial couple expecting twins, there is about a 1 in 500 chance those twins will have different skin colors, according to the BBC.

Lucy and Maria are fraternal twins, meaning that two different eggs were fertilized by two different sperm. Genetically speaking, mother Donna has genes composed of both light and darker features, resulting in one twin having pale skin and the other having darker skin.

Lucy said in an interview with Good Morning Britain that when she and her sister were 7 years old they told their mom they didn’t want to wear the same clothes.

Unfortunately, their difference in color led to a rather tough upbringing, especially for Lucy.

“They thought I was adopted and called me a ghost,” says Lucy.

Maria, for her part, wished she was more like Lucy during her childhood.

“I used to cry often. I had curly hair. I wanted my sister’s beautiful, red hair,” she says.

The two also have different personalities with Maria being the outgoing one who studied Law and Psychology at Cheltenham College, while Lucy studied Art and Design at Gloucester College.

Lucy explained: “Maria was outgoing whilst I was the shy one. But Maria loves telling people at college that she has a white twin – and I’m very proud of having a black twin.”

But while the two are opposites in so many ways, they’re as close as twins can be. They’re best friends and have learned to love themselves and their differences — with pride.

“If I have children one day, they may look like Lucy,” Maria says proudly.

And as they get older these twin girls say their bond just keeps getting stronger.

Although they look different and no longer dress the same way, I do think they share the same beautiful smile.

Despite some setbacks, they seem to have such a great outlook on life. And they’re also proof that it’s what’s on the inside that counts!

These two are not only strikingly beautiful but have a special bond that nobody can break, despite the many questions over the years as to their relationship.