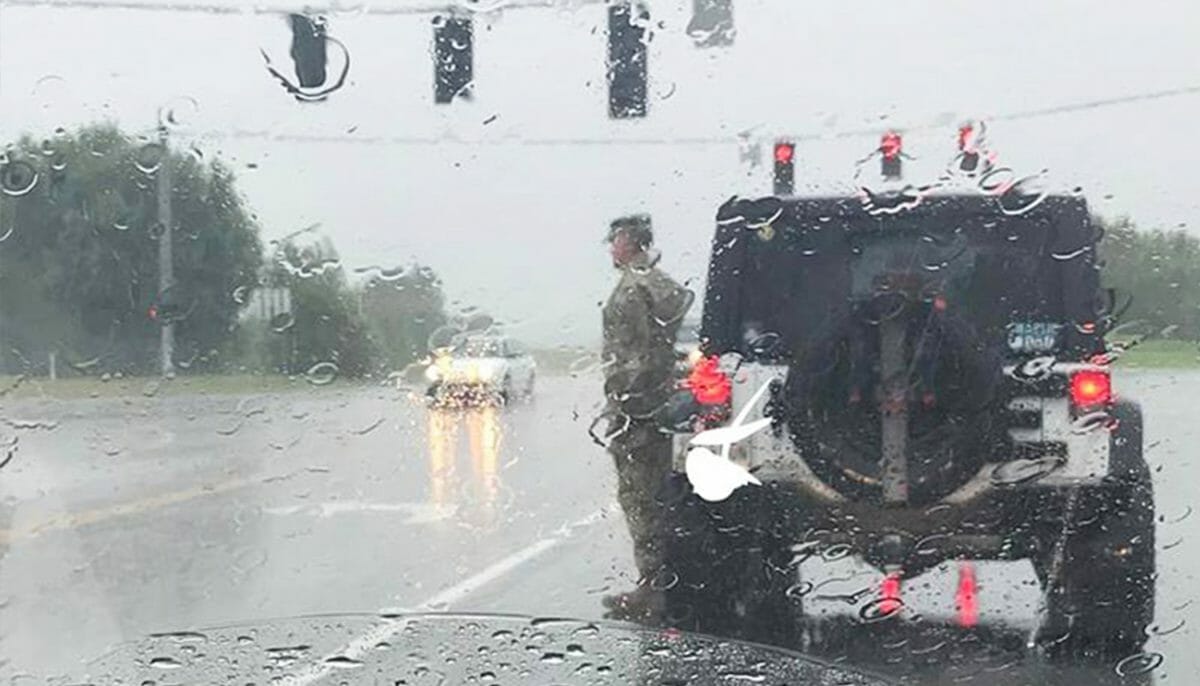 When I was younger, to respect others was something that was ingrained in me by my parents.

They knew the importance of showing respect in certain situations, and so I grew up with the same sense of purpose.

Which is why I was moved when I came across the picture of one U.S. soldier standing to attention in the pouring rain. The taker of the photo rightly knew they had to share it for the world, and I’m thankful they did.

The picture went viral, which is not really surprising at all, with people clamouring to pay tribute to the soldier.

It was what he said after being identified, though, that really paid testament to his character …

It was July 6, 2017. Erin Hester was sat at an intersection on a highway in Vine Grove, Kentucky.

It was there she spotted a soldier standing to attention outside in the driving rain. Confused, she watched him for a time, before realizing there was a funeral procession passing by. It was this that he was saluting, though he wasn’t part of the procession and didn’t know the deceased.

Hester knew that she simply had to take a photo of the moment. Her picture was uploaded to social media, where it garnered plenty of positive attention.

Hester wrote on her Facebook: “I was so completely touched by this today. A funeral procession was passing by and this soldier got out of his jeep to stand at attention in the pouring rain. I always get frustrated when I see cars that don’t pull to the side and stop for a procession, but this gentlemen went above and beyond.

“I feel pretty confident that there isn’t a military rule that soldiers have to do this. This made my heart happy to see the amount of respect that this gentleman showed a family that he doesn’t even know. #values #respect.”

It was after her post went viral that WHASII located the soldier responsible for the heartwarming act. He was identified as Col Jack L. Usrey, the Senior Army Advisor of the Tennessee Army National Guard.

He refused to accept the praise given unto him, instead stating: “I also owe it to my parents, Jim and Judy Usrey, from Martin, TN. They taught me to do this from when I have memory.

“I’m humbled and surprised at the reaction to such a simple gesture. My first thoughts were about how the bad weather can’t be helping how the family feels and I was hoping my small action would let them know we care.”

You can see more on the story in the video below:

Col. Usrey might try and play his gesture down, but we think it’s both mighty impressive and a brilliant way to pay respect.

Please help us pay tribute to him by sharing this article on Facebook.