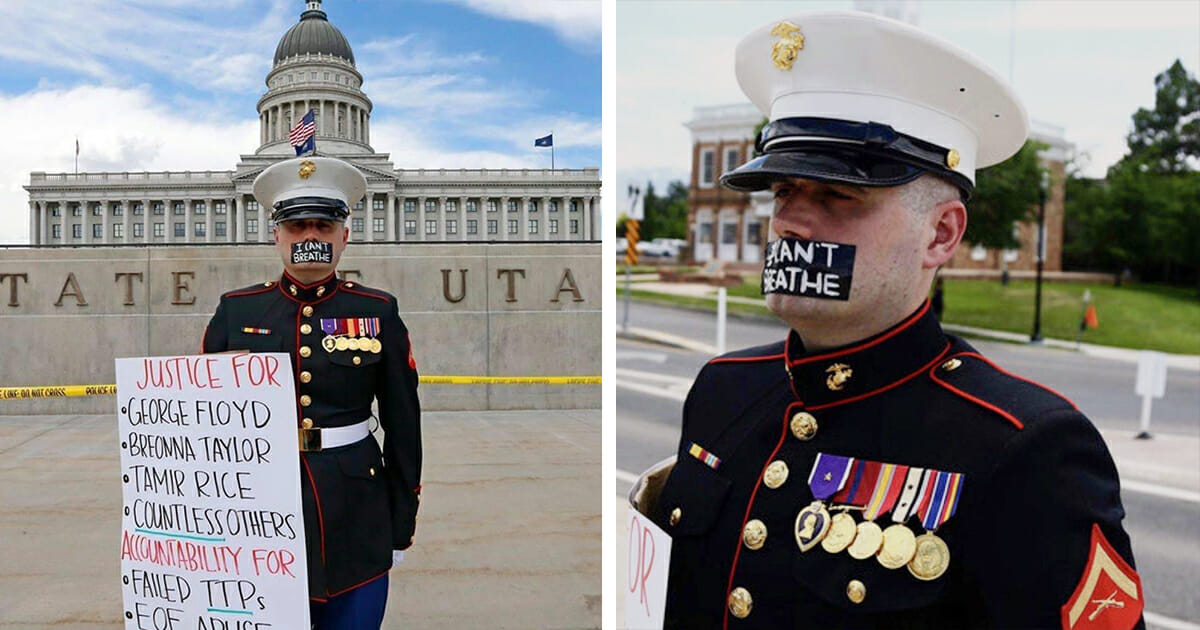 A Utah Marine veteran stood outside the Utah State Capitol for over three hours on Friday, embarking on a one-man demonstration designed to show support for the Black Lives Matter movement.

As per reports, Todd Winn explained in an interview that he had taped his mouth shut to silence what he described as a ‘privileged voice’. His aim was to magnify the thousands of other voices taking the fight to police brutality.

Photographer Robin Pendergrast, who captured the event, said the Marine veteran was decorated with two Marine Purple Hearts. Winn went on to verify this with 2News.

According to KUTV-TV, it got so hot on Friday that Winn’s leather shoes began to melt during his act of protest.

Even so, the Marine stuck to his guns, holding a sign that read: “Justice for George Floyd, Breonna Taylor, Tamir Rice, Countless Others.”

Katie Steck, Winn’s girlfriend, said Friday was a day of silence for her partner.

“He has been very angered and appalled by the injustices that have been happening,” she told KSL-TV.

“Seeing a lot of things that have happened, that’s not the kind of America he wants.

“That’s not what he wants to represent.”

Winn was reportedly wounded in 2005 during a tour of duty in Iraq, when a roadside bomb detonated close by. He suffered traumatic brain injuries as a result, leaving him with chronic fatigue.

Demonstrations continue to take place around the world in protest of the death of George Floyd. Floyd, 46, died during what should have been a routine arrest in Minneapolis on May 25.

Thank you, Todd Winn, both for your incredible service and your inspiring act of protest.

Share this article on Facebook if you want to stand alongside Winn and the Black Lives Matter movement.