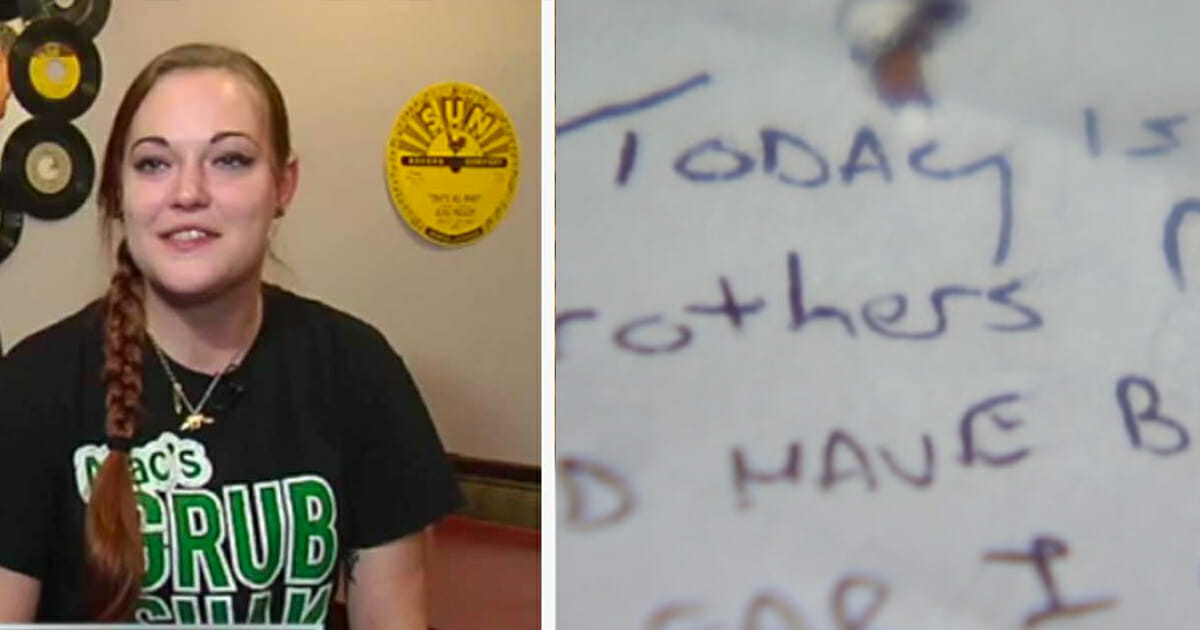 Say what you want about the tipping culture in the U.S., but it helps people who would otherwise struggle greatly.

No end of heartwarming stories have been born from the idea that the act of giving to those who go that bit further should be encouraged.

For her part, Claire Hudson knows a thing or two about such generosity. Whilst waiting tables at Mac’s Grub Shak in Spring Hill, Tennessee, she received a tip that was larger than the bill. It’s the story behind it, however, that has sent emotional ripples all across the internet …

“It was actually a really slow day and then this couple came in,” Hudson told ABC News.

At the time, the 25-year-old was working a double shift and simply concentrating on getting through the day. She didn’t think much above the ordinary concerning the couple’s visit, until after they’d left.

“They ordered a couple of beers,” she told WKRN.

“They got some hot dogs and I didn’t even notice they had left such a big tip.”

When she picked up their bill, Hudson realized they’d left a $36 tip on a bill that cost only $30.

Hudson admits: “I would’ve liked to have caught them and said ‘hey this is awesome!’”

“They did it anonymously and it was really sweet.”

More to it than meets the eye

But there was more to the gesture than met the eye. The couple in question hadn’t just left the tip because they thought she did her job well, or because they was especially kind.

No, they did it for a specific reason – one that made it extra special to Hudson.

On a note they left behind, written on a napkin, they explained things.

“Today is my brother’s birthday. He would have been 36 today. Every year I go eat his favorite food: hot dogs, and tip the waitress his age. Happy birthday, Wes,” the note read.

“I didn’t know what to say,” said Hudson. “I was literally in tears. It was definitely the best tip I’ve ever gotten. Not because of the money or anything but because of the meaning behind it.”

I’m not crying, you’re crying. What a great way to honor someone’s memory and do something great at the same time.

If this story warmed your heart, share it on Facebook and help us brighten up the world a little this week!