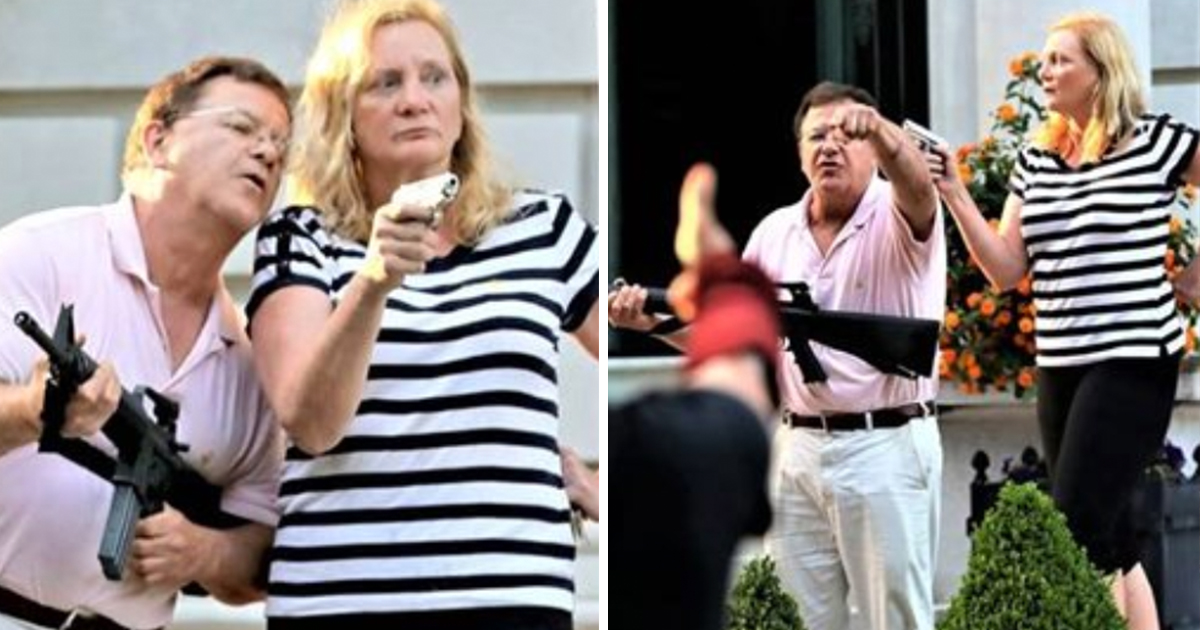 The husband and wife who pointed guns at Black Lives Matter protesters outside of their home in St. Louis, Missouri have been charged.

As per BBC News, lawyers Mark and Patricia McCloskey said they felt threatened so drew their guns when protesters neared their $1.5 million home.

Video footage of the couple went viral online, with Mark and Patricia being dubbed the internet’s “Ken and Karen”. They emerged from their house with an assault-style rifle and a handgun to point at the protesters passing by.

Since the incident a debate has raged online as to whether their actions are excusable or criminal. Now, it would appear, we have our answer.

St. Louis’ top prosecutor has weighed in on their actions, describing them as ‘unacceptable’.

Kim Gardner, St. Louis’ first black circuit attorney, said: “It is illegal to wave weapons in a threatening manner at those participating in nonviolent protest, and while we are fortunate this situation did not escalate into deadly force, this type of conduct is unacceptable in St Louis.

“We must protect the right to peacefully protest, and any attempt to chill it through intimidation will not be tolerated.”

Yesterday, July 20, the McCloskeys were charged by the Circuit Attorney’s Office in St. Louis with unlawful use of a weapon, as well as a misdemeanor charge of fourth-degree assault.

The New York Times say that the charge is a Class E felony that carries a possible penalty of four years in prison. Garnder, though, isn’t seeking jail time for Mark and Patricia, and instead wants them on a diversion programme.

Attorney general of Missouri Eric Schmitt has openly expressed his support for the McCloskeys and filed a motion to have their charges dismissed.

In a statement, Schmitt said:

“The right to keep and bear arms is given the highest level of protection in our constitution and our laws, including the Castle Doctrine. This provides broad rights to Missourians who are protecting their property and lives from those who wish to do them harm.

“Despite this, Circuit Attorney Gardner filed charges against the McCloskey’s, who, according to published reports, were defending their property and safety. As Missouri’s Chief law enforcement officer, I won’t stand by while Missouri law is being ignored – that’s why I entered this case to seek its dismissal, to protect the rights of Missourians to defend their property under Missouri’s Castle Doctrine.”

What do you think to news of this couple being charged? Let us know in the comments box.

Share this article if you think that anyone pointing guns at other people without good reason in the current climate should also be charged.