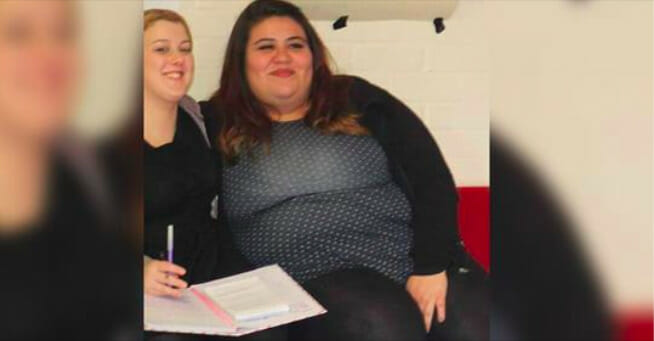 I’m not quite sure what’s worse: that your partner is unfaithful, or that he is verbally abusive. Unfortunately for 25-year-old Lisseth Exposito, her husband was both.

Lisseth was struggling with her weight for several years. It began after she started picking up bad eating habits, then things took a turn for the worse after having her daughter Lissmar. Her husband Jose ate just as badly, but was fortunate enough not to gain weight.

Meanwhile, Lisseth just grew and grew — until she was officially obese, consuming a staggering 4,000 calories a day, And she just felt unable to stop.

The weight gain gradually took its toll on the couple’s relationship — Jose became cruel and abusive towards Lisseth.

“I’d catch Jose looking at me in disgust. As I ate my dinner on the sofa, I’d hear him mutter ‘fat girl,’ as crumbs bounced off my belly,” Lisseth told the Daily Mail, adding: “It started with little digs, but soon it was cruel jibes. I was desperate to be the curvaceous hourglass girl he had fallen for, but I had no willpower or self-esteem to diet.”

Meanwhile, Jose was fortunate not to gain weight, despite them both not eating well.

“Jose was so lucky. He’d never put on weight no matter what he ate. I craved junk foods and loved munching on anything from cakes to fry-ups,” Lisseth said.

Eventually, Jose also became cold and distant, and their sex life suffered. This simply made Lisseth more depressed and caused her to eat even more.

“Jose wouldn’t show me any affection and food became even more of a friend,” she said. “I hit an all-time low. Food became the only thing to give me a moment of happiness.”

Then, one day, Lisseth’s sadness transformed into something even deeper — she intercepted incriminating messages on Jose’s phone: he’d been cheating on her.

“I got hold of his phone and found myself scrolling through texts, and hundreds of incriminating texts littered his inbox. I felt disgusted, but something changed in me. When his key turned in the door that evening I pounced and told him what I’d found,” she explained.

When she confronted him, he didn’t deny it — and instead had the audacity to blame her.

But the devastating experience was also an eye opener — and something in Lisseth snapped. She was determined and promised herself that Jose would never hurt her again. She filed for divorce from him and decided she would change her life around.

She pledged to lose the weight — and never get back with Jose. And sure enough she did — an amazing 126 pounds in fact!

“I lost weight for me. I dumped my junk food diet and my rubbish husband,” Lisseth said.

Won’t Take Him Back

“Every weekend, Jose would pick up Lissmar and do a double take as he looked at me,” she said. “Then one Friday he told me I was looking hot. I closed the door on him. I would never let him back in my life. I am a role model to my daughter and I proved him wrong.”

Lisseth’s transformation means she is now not only free from abuse, but happier and healthier than ever. She has certainly acted as a great role model for her daughter.

What a brave woman who found the strength to do exactly what needed to be done! Share Lisseth’s story if you agree that she did the right thing!